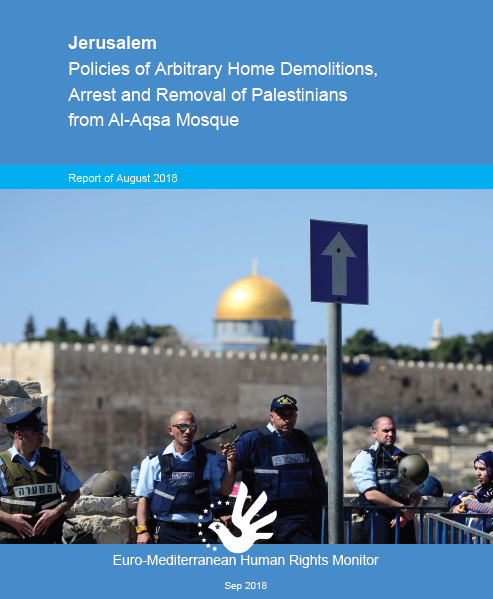 Geneva- Israel has grown relentless at violating the rights of the Palestinian population in Jerusalem, especially during last August, a new report by the Euro-Mediterranean Human Rights Monitor shows.

This increase in the number of violations against Palestinian residents of the Holy City is manifested through bans from visiting Al-Aqsa Mosque, home demolitions, as well as detention and arrest of frequent visitors to the Mosque, notes the report.

Titled: “Jerusalem: Policies of Arbitrary Home Demolitions, Arrest and Removal of Palestinians from Al-Aqsa Mosque,” the report reveals that the Israeli authorities’ arbitrary measures have increased following the decision of US President Trump to relocate his country’s embassy to Jerusalem.

Testimonies of Palestinians in Jerusalem also confirmed the Israeli authorities’ discriminatory policies against them, including through restrictions to freedom of movement and worship.

The most prominent of the violations, which have developed into policies, is the arbitrary bans on Jerusalemites from visiting or praying at Al-Aqsa Mosque. These bans have grown into removals stretching from 15 days to over six months, culminating in what is known as the Blacklist.

The Blacklist, notes the report, included a group of Palestinian men, women and girls - to be circulated to the police present at the gates of Al-Aqsa Mosque. Anyone whose name appears on this list cannot enter the Mosque.

The Israeli authorities deny the presence of such a list; however, the soldiers’ behavior at the gates indicates otherwise, especially that those detained are tried before a court to force their bans for being on the list of names of Palestinians prevented from entering the Mosque. Objection or justification with regards to this blacklist is simply denied.

When I arrived at [Al-Aqsa Mosque], a police officer stopped me and prevented me from entering, claiming that I was blacklisted... A few minutes later, another policeman came from inside the Mosque, cursed me, took me to the Police Station, beat me in the head and face, and then released me after giving me a notice that I cannot enter the Mosque or the Old City for 15 days, said Nizam Abu-Rmouz, 37, from Jerusalem’s Silwan Neighborhood.

There is no legal basis for banning any person from places of worship in this degrading manner, said Sandra Owen, Euro-Med’s policy adviser. This action blatantly violates the right to freedom of worship and the exercise of religious rites, added Owen.

The report also noted the use of arbitrary interrogation and detention of women and girls by the Israeli police without any proper legal reason, often followed by bans from visiting the Mosque.

I stayed one day in prison. I felt exhausted and tired. My head and limbs hurt even though I was not handcuffed. I feel for those who spend months and years enduring this suffering, said 16-year-old Shefa Abu Ghalia, who was detained and then banned from visiting the Mosque.

The report also covered cases of home demolitions by the Israeli municipality of Jerusalem in the town of Issawiya, Shu’fat, and the Jabel Mukaber Neighborhood under the pretext of building without a permit. Although true, the Israeli authorities have deliberately obscured approval to Palestinians’ building requests.

The staff of Al-Aqsa Reconstruction Committee, commissioned by the Jordanian Ministry of Awqaf, were not spared these arbitrary measures. Four of the committee’s members were stopped from work and arrested.

A member of the staff said in a testimony that they were doing their work at the Al-Aqsa Mosque as part of the Reconstruction Committee. They were about to paint Qasim Pasha's path before Al-Silsila (or Chain) Gate. They were surprised by a group of Israeli police who asked them to stop working without any explanation.

After that, we were arrested and taken to al-Qashla police station in Jaffa Gate. After waiting for more than six hours, we were told that we are banned from entering Al-Aqsa Mosque for 15 days. We also received summons for interrogation the next day. I asked them to allow me to return to Al-Aqsa Mosque to take my personal things, but they refused, said Bassem Zoghir of the Committee.

The report also spoke of the Israeli authorities’ pursuance of a policy of raiding Palestinian homes in Jerusalem on a daily basis, either for the purpose of arrest or detention, and without arrest or search warrants in most cases.

Concluding its report, the Euro-Mediterranean Human Rights Monitor called on the Israeli authorities to stop all arbitrary violations and policies against Palestinians in Jerusalem, in particular with regards to bans from visiting Al-Aqsa Mosque, daily home demolitions and arbitrary detention.

Euro-Med Monitor also called on the authorities to take all necessary measures to prevent further violations, and to end measures taken to restrict the population’s freedom of worship in the Holy City.

The nonprofit organization reiterated calls for the international community to shoulder responsibilities and to press the Israeli authorities against committing new violations in the Occupied City, stressing the need to ensure Israel’s compliance with the international legal status of the Holy City and to ensure its commitment to allowing religious freedom as well as ending removals and home demolitions.

Euro-Med Monitor also called on the Security Council to take immediate measures to protect the legal status of the Holy City and to enforce previous decisions by the Council, especially relating to settlement activity in Jerusalem and restrictions to freedom of worship.