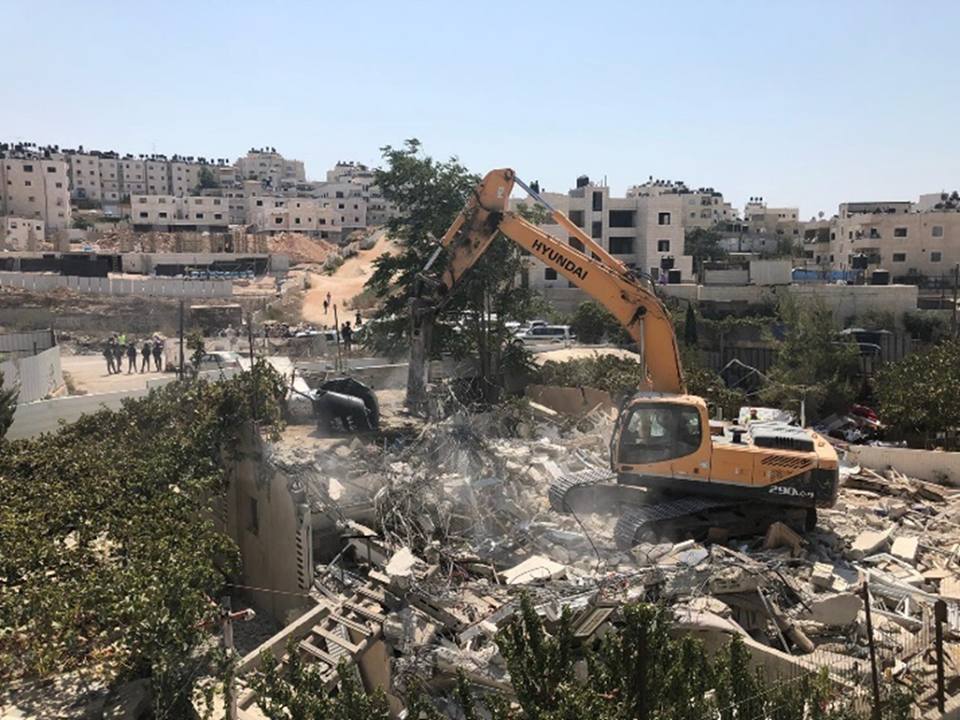 Geneva - The Israeli authorities continue to take accelerated and unprecedented measures against Palestinian residents of Jerusalem throughout September, reveals a new report by the Euro-Mediterranean Human Rights Monitor.

The report concluded that Israel is punishing Al-Aqsa worshippers, and is following a number of policies to suffocate Palestinians through arbitrary detention, night house raids and searches, home demolitions, and orders to banish them from Al-Aqsa mosque, Euro-Med Monitor’s team has documented.

Titled “Banned: Expulsion, Displacement, and Arbitrary Prosecution of Palestinians in Jerusalem during September 2018,” the report shows the escalating Israeli attacks on Palestinians in the Holy City during last September, which are very much coinciding with the Jewish holidays.

The Israeli police and soldiers patrol through Al-Aqsa mosque and its surroundings. As a result, provocations and attacks increase in places of worship between settlers or soldiers and Palestinians, mostly blaming the Palestinians even when they are the victims.

The report sheds light on Israel’s attempts to impose the Israeli educational curriculum in Palestinian schools, in practical application of the newly passed Nation-State Law.

The report also highlights the suffering of Khan al-Ahmar villagers following the Court’s final decision to demolish the village and relocate its residents to a place near a landfill site. The step was already condemned by the United Nations, as an obvious example showing the extent of the transgression perpetrated by the Israeli authorities against Palestinians.

The Israeli forces have been following a very strict policy towards Palestinians present in Al-Aqsa mosque. Whenever a groups of settlers storm the Mosque, the mere presence of Palestinians in the Mosque’s yards is enough to beat, detain, and ban them from entry to the Mosque. The ready-made accusation is that Palestinians are disrupting the public order.

During Jewish holidays, Palestinians are usually subjected to detention en masse, finds the report. Testimonies gathered by Euro-Med’s team show how arbitrary Israeli soldiers’ arrest of Palestinians can be. The case of Rami Al-Fakhuri is one example. Even employees of the Jerusalem Islamic Waqf are not spared these arbitrary measures, which included beating.

“Some of the Waqf employees and I were brought before the court, and the police asked that we be detained for three days. But our lawyer assured that arresting us is illegal. Therefore, the court decided to extend our detention until 09:00 PM only to release us on conditions of house arrest for three days, ban from the Old City, and payment of a bail worth US$ 550, in addition to signing a personal warrant by a third party of $1380", said al-Fakhouri in his testimony.

Following the three days of house arrest, we were summoned only to know that we were banned for an entire week. After that, I received another notice from the al-Qishla police that I am banned for another 6 months, al-Fakhouri further added.”

Regarding home raids, searches and arrest without a warrant, Euro-Med’s team recorded dozens of cases during September standing as a witness to Israel’s systematic harassment of Palestinians.

Arrest of minors is no exception. Yacoub al-Dabbagh, 16, is one of many others detained without charges, and with sheer disregard for their age or sex. Yacoub was also banned from visiting the Al-Aqsa Mosque for three months.

The report further mentions several cases of Israeli police and soldiers’ use of force, including by beating, against Palestinians in Jerusalem. Settlers’ violence that is met with impunity on the part of Israeli police is another example. Not only that, settlers could commit violations while under protection from the Israeli security forces.

The case of the three Palestinians assaulted by a group of 30 settlers is documented in the report. Islam Awaja, one of those assaulted by settlers, said he was beaten along with two others. “Settlers threw stones at them while looking for Arabs to beat. When the police came, they were gone,” Awaja said.

Also, about 1,000 settlers broke into Al-Aqsa Mosque since the beginning of Sukkot, a Jewish holiday, under tight security and escorted by the Israeli police and special forces. These assaults reached the peak in the morning of Thursday 27th of September, where hundreds of settlers performed Talmudic rituals publicly and under the protection of the Israeli police in the Al-Aqsa Compound.

Concluding the report, the Euro-Mediterranean Human Rights Monitor called on the Israeli authorities to put an end to the illegal practices by settlers and the police towards Palestinians, and to treat Palestinians equally, and to prosecute those who attack them.

Euro-Med Monitor also called on Israel to force the Jerusalem Municipality to issue a clear building plan for Jerusalem areas in order to allow Palestinians to build freely, and to investigate violations perpetrated by the police as well.

Euro-Med Monitor further called on the international community pressure the Israeli authorities to stop their violations in occupied Jerusalem, including restrictions of religious freedom and the policy of home demolitions.