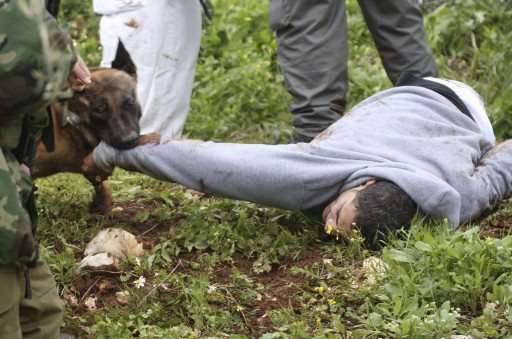 The Euro-Mediterranean Human Rights Monitor (Euro-Med Monitor) has strongly condemned the IDF's use of police dogs against peaceful demonstrators in the Palestinian territories, and described such action as a flagrant violation of the international law and humanitarian law.

The statement released in Sunday, March 18, resented the action of the Israeli occupation army in which a police dog was urged to attack a Palestinian youth during a peaceful demonstration last Friday. The Euro-Med Monitorconsidered this action as a form of "torture" and "inhuman and degrading treatment", which is against the international law.

The Euro-Med Monitor authenticated the incident in which the Israeli soldier gave a signal to the dog accompanying him to attack the Palestinian youth. The dog brutally attacked Ahmed Eshtewi (24 years), causing him bleeding in the thigh and hands, according to the testimony of the victim's father, Shaker Eshtewi and as shown in the image of the assault.

Mr. Eshteiwi stated that his son was the victim of an intentional attack that occurred before the sight of the Israeli soldiers who did not save him from the attack, despite his continuous appeals. The father added that when Ahmed’s unlce, Mr. Murad Eshtewi tried to rescue his nephew the Israeli soldiers’ sprayed gas in his face, which indicates the deliberate intention this attack.

Mr. Tareq Al-liwa’a, the field researcher Euro-Med Monitor, demanded the Israeli forces to reveal the whereabouts of the victim Ahmed Shteiwi, which is still unknown after his arrest from the moment of the attack. Also, Mr. Al-Liwa’a warned from the repeat of such inhuman use of police dogs by the Israeli army.

Al-Liwa’a noted that during the second Intifada, the Israeli occupation army deliberately used trained police dogs against Palestinian workers, children, women, and prisoners, for security pretexts, but the documentation shows that this use was intended for "torture and abuse", as in the case of Eshtewi.

Al-Liwa’a also mentioned another case in which the Israeli police dogs attacked an elderly Palestinian, Mr. Salem Bani Odeh (105 years) when the Israeli army broke into his home town of Tammun near Nablus in the mid of 2010, which caused him disruption in the shoulder muscles. In addition, the brutal attack of the Israeli police dogs cause psychological effects on the victims, as in the case of the two children Muhammad Najm (14) and  Muhammad Qasim (16), which required them to have psychological  treatment.

It is worth mentioning that the use of police dogs against individuals is prohibited, and it considered as a form of "torture" as stipulated in the Universal Declaration of Human Rights, the Convention against Torture in 1984, and the International Covenant on Civil and Political Rights. Also it is considered as an "affront to human dignity" because it causes fear and intimidation, especially for children and the elderly.