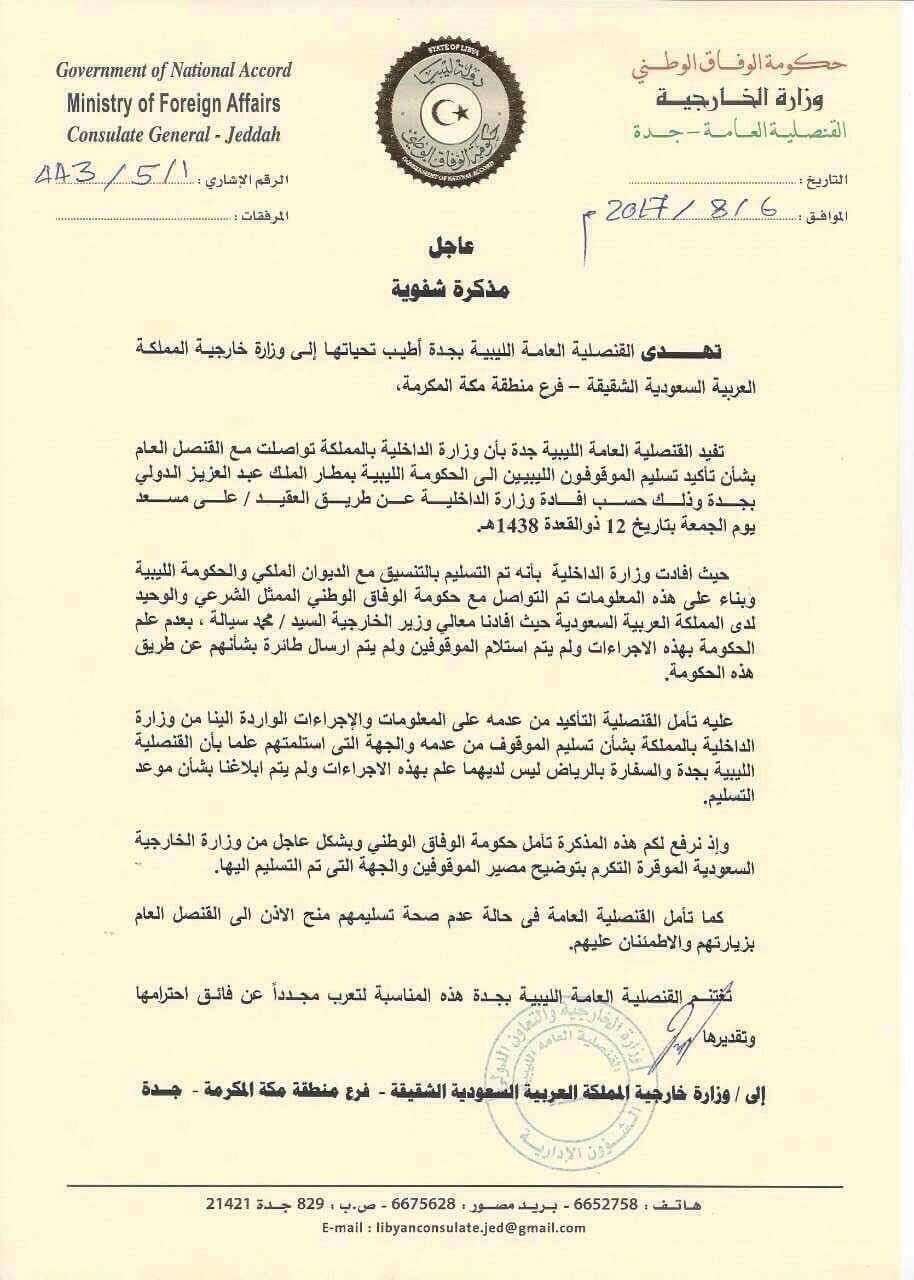 These Libyan individuals have disappeared once they arrived at the Jeddah Airport to leave Saudi Arabia after performing Umrah in June 2017, added the human rights group, stressing Saudi Arabia’s responsibility for their enforced disappearance and calling on the Saudi authorities to immediately reveal their fate and whereabouts.

The Saudi authorities later admitted that the persons in question had been detained, however they claimed that they were also released. This claim does not seem to hold water, especially that these individuals were said to have not been found in the Libyan territory or in Saudi prisons.

Their families stated that they know nothing of their whereabouts since they disappeared in Saudi Arabia, and the Libyan government has no record of their supposed entry into the country.

These three persons are Muhammad Hussein Ali al-Khadrawi, 34, Mahmoud Ali Bashir Rajab, 34, and Hassan Mohammed Salem Zu'ait, 28, all of them from Zawiya, a coastal city about 45 kilometre west of Tripoli.

However, the Saudi security authorities arrested them on claims of being wanted by the Libyan authorities, a claim completely denied by the UN-recognized Libyan Government of National Accord.

“On 31 May 2017, My son went with two of his friends to perform Umrah in Saudi Arabia. Intending to return on 25 June 2017, they were arrested at the King Abdulaziz International Airport without reasons or charges against them,” said Hussein al-Khadrawi, Muhammad’s father, in his testimony to the Euro-Med’s team.

“We submitted a request to the Attorney General in Libya asking him to communicate with the Libyan Foreign Ministry to inquire about the arrest,” added al-Khadrawi.

“After considerable efforts, my son contacted me over the phone on 17 July 2017 and said that he was still detained at a security facility in Jeddah, confirming that he was detained without charges at the request of the Libyan authorities,” said al-Khadrawi.

Contacting the Libyan Government of National Accord in Tripoli, the Ministers of Foreign Affairs and Interior denied such allegations, stated the Euro-Med Monitor.

The Libyan Foreign Ministry said that the Libyan Consul had visited the detainees, who were found held in solitary confinement. The prison administration informed the Consul that no charges were made against them except that their release is bound by a decision from ‘the higher authorities in Riyadh.’

The detainees were then transferred to a better place and were allowed to communicate with the official authorities.

A month and a half after detention, the Saudi Ministry of Foreign Affairs informed the Libyan Consulate in a letter that the detained persons were “returned to where they came from,” which was interpreted as: returned to Libya.

However, the Libyan Government denied, in a letter sent by the Libyan Consulate in Jeddah to the Saudi Ministry of Foreign Affairs, that three arrived in Libya.

In the letter, the Libyan Government also denied any coordination regarding their extradition, stressing that it was not aware of the measures taken, and calling on the Saudi authorities to allow the Libyan Consul in Saudi Arabia to visit the detainees and learn about their whereabouts.

Libya's Attorney-General has communicated with the Country’s Passport, Immigration and Foreigners Affairs Authority as well as Civil Aviation Authority to inquire about the entry of any of the mentioned detainees into the Libyan territory on or before the date indicated by Saudi Arabia.

These bodies confirmed that the three persons mentioned did not return to Libya through any of the ports under the control of the Government of National Accord.

Saudi Arabia’s letter, indicating that these persons were “returned to where they came from”, is vague, casting doubts on Saudi Arabia's intentions and credibility, especially after Jamal Khashoggi’s case, said Sarah Pritchett, the Euro-Med’s spokeswoman.

Saudi Arabia will remain responsible for the enforced disappearance of these individuals until it reveals their fate and informs those concerned of the destination it believes have been returned to, added Pritchett.

Families of the missing individuals fear that Saudi Arabia has handed over their sons to the Libyan government in eastern Libya, which is under the control of military commander Khalifa Hafter, and is headed by the interim government of Abdullah al-Thinni, who has strong relations with Riyadh.

If this proves to be the case, Riyadh will have to answer for two illegal actions: The first is the supposed handing over of Libyans to a party it did not name, and the second is collaborating with a body other than the UN-recognized Government of National Accord, said Pritchett.

The latter action would violate Security Council resolutions recommending that all member states deal only with the official government in Tripoli, to which the Libyan Consulate in Jeddah is affiliated, added Pritchett.

A prisoner detained in a prison under the command of Khalifa Haftar said to the Euro-Med Monitor in a testimony that he saw Muhammad al-Khadrawi, one of the three subjected to enforced disappearance, being tortured by Haftar’s men.

“Since the disappearance of my son a year and a half ago, I and the family have been living in a very stressful situation. We do not really know what is happening to him or what charges he is facing. We have not even been able to take legal action to ensure that he is entitled to a fair trial,” said al-Khadrawi.

“We fear my son will be killed the same way Khashoggi was killed,” added al-Khadrawi, while speaking of his wife’s deteriorating health since her son’s arrest. “She fell unconscious three times and stayed in hospital for over four months,” said al-Khadrawi.

The Euro-Mediterranean Human Rights Monitor calls on the Saudi authorities to disclose the fate and whereabouts of the detainees or any information related to their supposed destination.

The Euro-Med Monitor also calls on the United Nations, especially the Working Group on Enforced or Involuntary Disappearances, to intervene in order to pressure the Saudi authorities to release the detainees, compensate them and hold those responsible for their enforced disappearance to account.

A copy of the letters was obtained by Euro-Med Monitor: 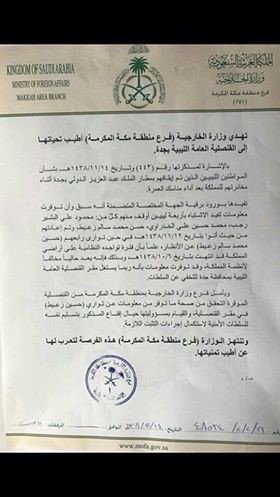 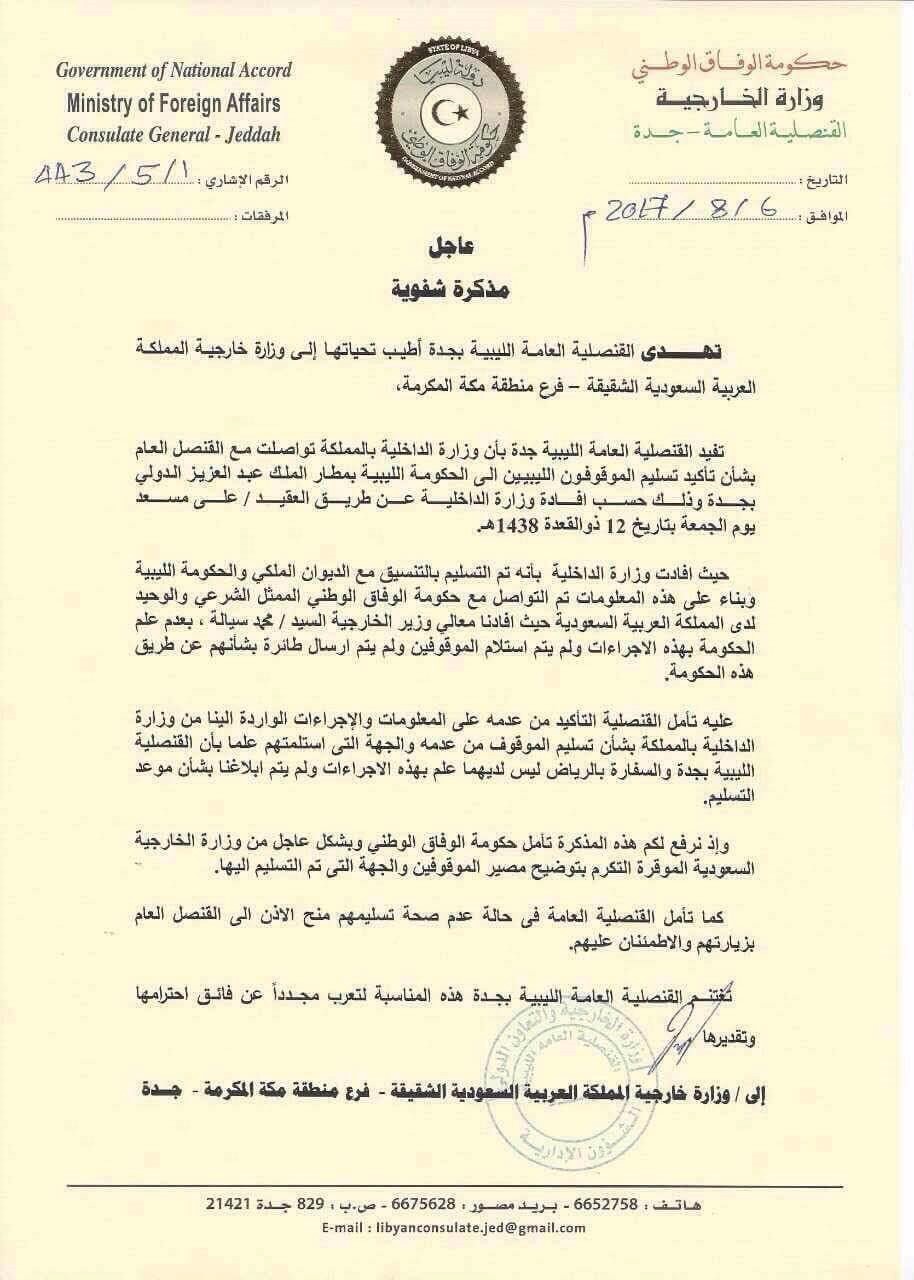