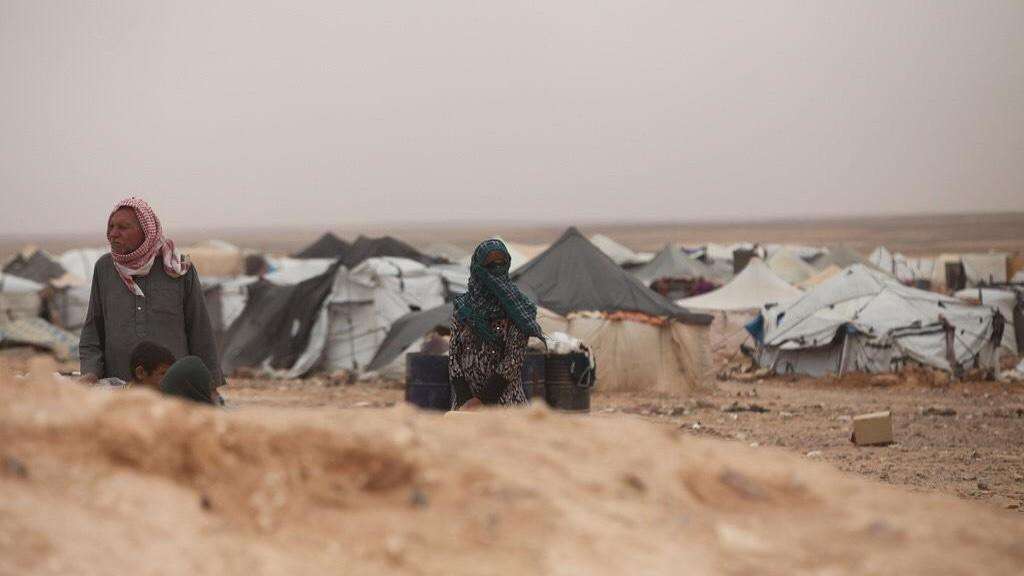 Geneva - Some 45,000 Syrian refugees are trapped in the Rukban refugee camp on the Jordanian-Syrian border under dire living conditions without access to basic needs, says the Euro-Mediterranean Human Rights Monitor in an urgent call to save the lives of residents.

The number of refugee deaths in the camp rose to 9, most of them children. Three of these children died a week ago, the last of whom was a 10-day-old baby who died yesterday due to the lack of care and medical equipment inside the camp, adds the group.

The Syrian refugees living in the camp lack basic needs of life while living under the control of a US-backed opposition group forcing the camp to fall under siege by the Syrian regime forces. The camp itself is located near the Tanf US military base illegally occupying 55 km of the Syrian territory and positioned on a highway connecting Baghdad and Damascus.

The Kingdom of Jordan considered the camp a closed military zone after a suicide attack by ISIS in June 2016 resulted in the killing of 7 Jordanian soldiers positioned at a point delivering services to IDPs.

The failure to provide necessary support to the internally displaced in the camp would further seriously and severely impact their very lives. The camp suffers from a severe shortage of medicines and medical equipment, in addition to a serious lack of training to deal with patients, especially those in critical conditions.

Nurses are forced to play the ‘doctor’ role, given the lack of doctors in the camp. Patients also are forced to cross the border into Jordan in order to receive medical care at a UN clinic there.

Residents are suffering from a severe shortage of food, drinking water, sanitation and basic housing. The freezing cold is a nightmare with the lack of access to heating.

UNICEF provided 21 truckloads of humanitarian aid as part of a United Nations convoy and the Syrian Red Crescent teams provided some assistance last November. However, this aid can barely meet the needs of the camp’s residents for a few days.

The security concerns of Jordan must be respected, however the desperate humanitarian situation of these IDPs must take priority, and Jordan should work with all concerned bodies to facilitate access to aid in the camp, stated Pritchett.

The Euro-Mediterranean Human Rights Monitor calls on the Syrian regime to coordinate with UN aid groups to facilitate the delivery of aid, and further calls on all concerned parties to ensure that humanitarian aid reaches all  people and ensures safe and voluntary return of IDPs to other opposition- or state-held territories.

Euro-Med Monitor also calls on the international community as well as human rights and relief organizations to coordinate with the relative authorities to provide support to the camp’s IDPs, whether through Syrian or Jordanian territory.