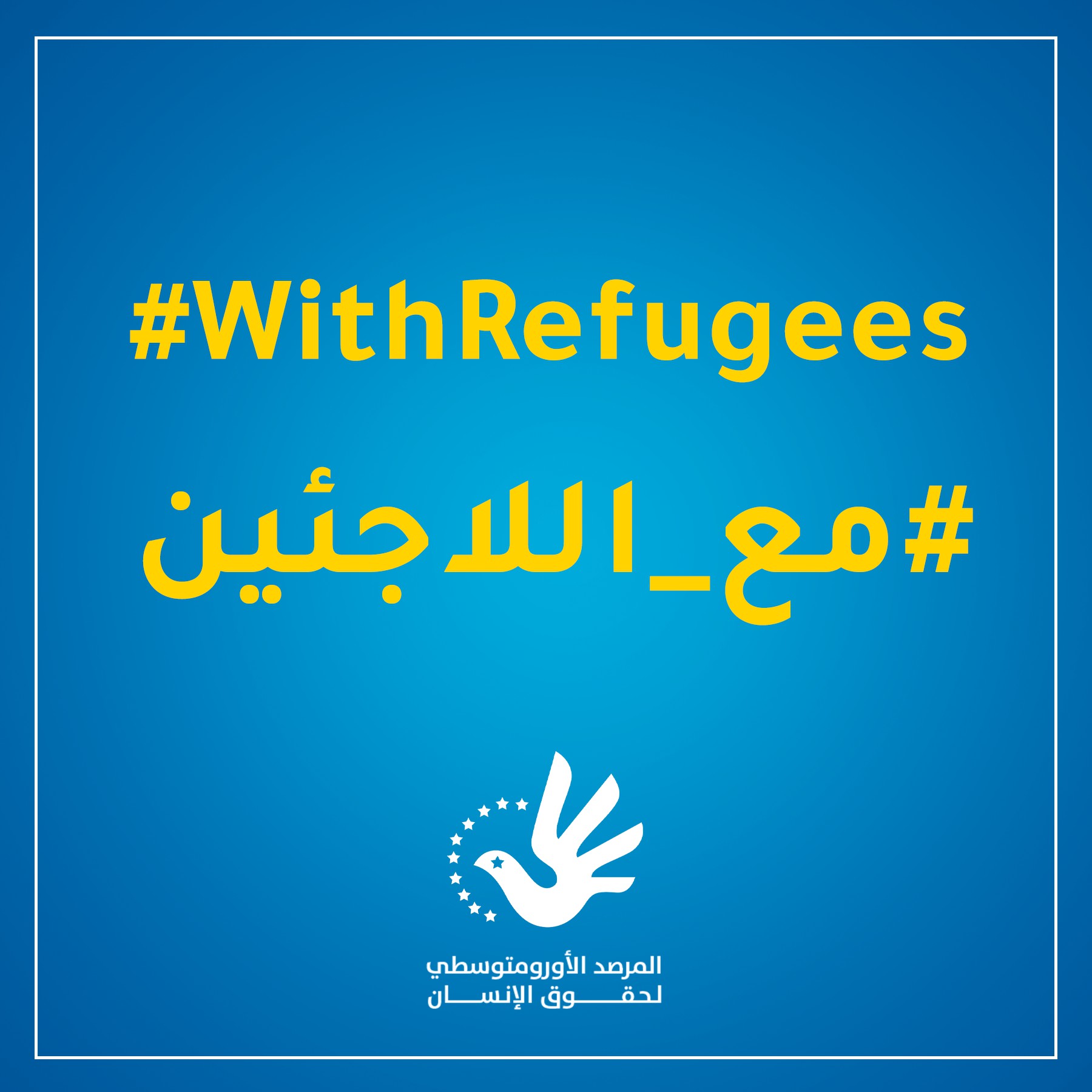 Geneva - The Euro-Mediterranean Human Rights Monitor launched an extensive international campaign that will last for a week, to support refugees on Wednesday, 26 December 2018. The campaign includes releasing awareness-raising publications and reports on the refugees’ situations and their success sorties, as well as publicizing signing a global petition to improve the legal and practical systems of refuge. The campaign includes announcing the launch of three scholarships for refugees, calling on all people supporting refugees’ rights to interact with the campaign and to disseminate information about it as widely as possible.

The international Geneva-based organization, said the campaign is part of the international campaign of solidarity with refugees around the world launched by the United Nations High Commissioner for Refugees (UNHCR), with the participation of 400 human rights international organizations. The campaign seeks to raise awareness about refugee issues and the obstacles facing them in countries of asylum, through publishing information materials, using the hashtag #WithRefugees, in Arabic, English and French.

The campaign aims to encourage the international public opinion to support refugees by highlighting their situation and disseminating their success stories in countries of asylum. the campaign also aims at highlighting positive models of refugees achieving tangible achievements despite the difficult circumstances they have experienced.
The Euro-Med Monitor called on all individuals, activists and organizations that advocate for refugees’ rights to interact with the campaign by twitting and disseminating information in support of refugees, their success stories or their suffering by using the World Refugee Support Campaign hashtag (#WithRefugees).
The organization also called for sharing the materials that it will publish this week, as well as signing the petition in support of refugees.


“The Euro-Med Monitor aims, by this campaign, to emphasize states' responsibility, both receiving refugees or not, as well as concerned institutions, in accordance with the principles of the New York Declaration for Refugees and Migrants 2016 and the international conventions on asylum and migration,” said Sarah Pritchet, the spokeswoman for the Euro-Med Monitor.
Pritchett stressed that the declaration urged states to provide a safe place for refugees, easing pressure on countries that receive them, as well as promoting refugees’ self-reliance. She also pointed out the importance of making resettlement more widely available to refugees in third countries and making them able to return voluntarily to their home countries in safety and dignity.


The Euro-Med Monitor announced, as a part of its participation in the campaign, the launch of a number of refugee-rights related projects, including the launch of an opportunity for refugees’ activists to participate in the organization’s delegation during the events of the Human Rights Council in Geneva. The opportunity will cover the costs of accommodation and travel for three participants, as well as providing the necessary training to participate in the events of the Council including main sessions and side-events.

Alaa Barghouthi, the Euro-Med Monitor media officer, said that his organization has allocated a special attention in its blog, named as “Our Right”, which will be launched in early 2019, for refugees, in order to cover their issues from a human rights point of view and to highlight their role in their new societies. This project will provide a space for researchers and human rights activists and advocates to express their views and opinions on the human rights situation in their home countries and the new communities they settled in.

Barghouthi noted that the Euro-Med Monitor will publish a special report entitled “Completely alone!” Which examines the situation of unaccompanied child asylum seekers from the Middle East in Switzerland, and the policies pursued by the government to study their applications, leaving them to face difficulties alone in the country.
The youth-led organization has signed a petition by the United Nations High Commissioner for Refugees (UNHCR) aimed at emphasizing the right of every refugee child to education, the right of every refugee family to a safe home and the right of refugees to acquire the skills that qualify them to work to help support their families. The organization aims to publicize this petition which is signed by nearly two million people from around the world.