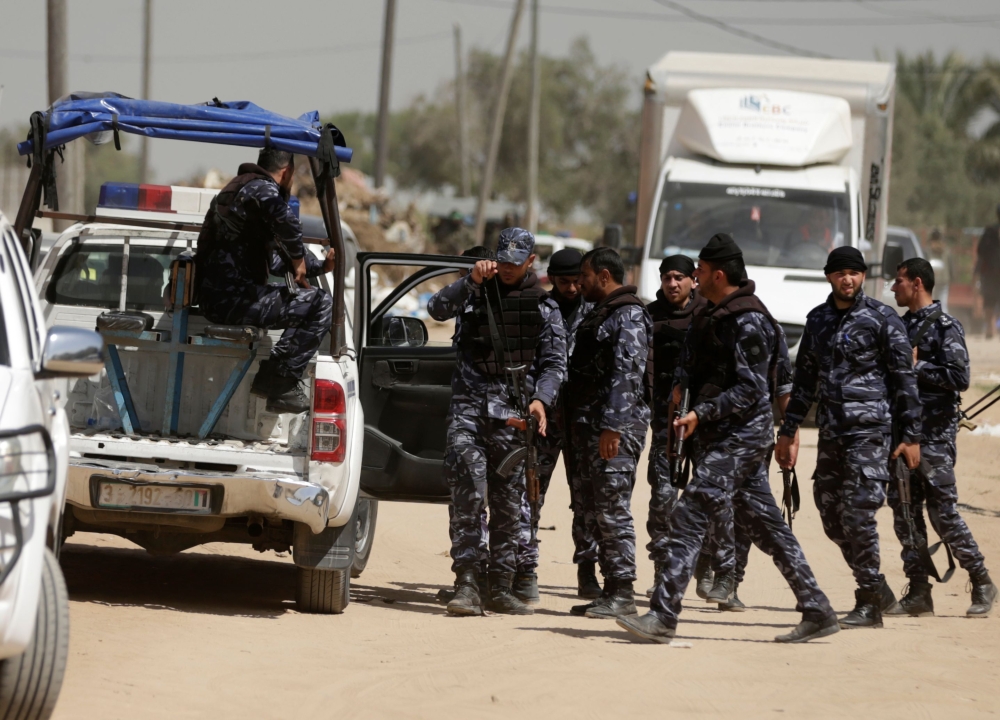 POT – The Euro-Mediterranean Human Rights Monitor condemned Hamas security services' practices of restricting the right to peaceful assembly, the arbitrary detention and summoning of dozens of people in different parts of the Gaza, in conjunction with the calls by Fatah movement which has just marked the 54th anniversary of its founding.

The International Human Rights Monitor, based in Geneva, stated that its team documented in the past two days the arbitrary detention of at least 20 persons by members of the Hamas Authority in the Gaza Strip, most of them are Fatah activists. In addition to summoning others and suppressing of several peaceful assemblies organized by members of Fatah movement on Monday to celebrate the anniversary of their movement.

Amin Abed, a resident of the northern Gaza Strip, said in a statement to the Euro-Med Monitor team, that the Internal Security service sent him a written summons on Sunday evening, 30 Dec 2018, to attend immediately at the security headquarters near Al-Sheikh Zayed square.

Abed explained: "I went on Sunday at 6:30pm to the mentioned headquarter, and when I arrived I was admitted to a room where there were eight other detained people, all of them are members of the Fatah movement and were summoned on the same day." "After about 10 minutes I was taken to a small solitary confinement (one and a half meters by two meters) with a mattress in it, but the floor of the room was full of water, including the mattress, and it was very cold. They forced me to stay standing in the confinement until 11 pm when the other detainees were released, and then I asked them to release me or to move me to another suitable confinement. Then they took me to another confinement and brought me a mattress to sleep after more than an hour of waiting."

Abed said that the security officers returned him on the second day to the first confinement and forced him to take off his shoes and stand there. They then began to interrogate him about posts and opinions he published on his Facebook page. After about an hour, they released him on the condition of returning on Wednesday, 2 Jan 2019 to continue the interrogation.

Nada Nabil, the spokeswoman of the Euro-Med monitor in the Gaza Strip, said that their team checked a sample of the posts that Abed was interrogated on, and found that they fall under the freedom of expression, criticism of the ruling policies of the Gaza Strip and calls to reject it.

In Gaza City, at the north of the Gaza Strip, the Euro-Med Monitor has documented the detention of Ahmed Hellis, the general coordinator of Fatah's student youth body at Al-Azhar University, where he is still detained, according to his family.

In a call with the Euro-Med Monitor team, Hellis's father said that his son has been detained since Sunday after receiving a summons from the Internal Security Service at 5 pm to attend immediately. He also said that the family do not know anything about their son until now, and he is has not yet been brought before a court. "I think that the detention of my son came to thwart the plan of Fatah movement to light the torch in its anniversary, as well as to thwart an activity they intended to have at Al-Azhar University on the same occasion." he said.  He added that the same apparatus detained his son about two months ago for carrying out activities that support the speech of the Palestinian President, Mahmoud Abbas, at the United Nations General Assembly last September.

In addition, members of the police and internal security dispersed different gatherings by the Fatah movement in Al-Saha area near Palestine square at the center of Gaza City, across from the Arab Bank and in Al-Saraya Square at the west of Gaza City. A witness, Mohammed al-Telbani, said that uniformed police officers dispersed a group of women who were gathering in Al-Saha square on Monday evening between 3:30 and 4:30 at the invitation of the Fatah movement to light the torch. Furthermore, the security officers also assaulted a group of young people by batons across from the Arab Bank in Palestine square. Other witnesses saidthat a member of the security officers beat a 12-year-old boy while he was carrying the flag of Fatah.

Al-Telbani explained that dozens of members of the security officers, some of which were uniformed and others masked, surrounded Al-Saraya Square at the west of Gaza City, while many of Fatah activists were seeking to gather. Al-Talbani said that security officers assaulted some young men with batons and insulted them after they were shouting slogans supporting the Palestinian president and Fatah leader Mahmoud Abbas. They also pulled Fatah flags and Kofiyas from the activists without giving any reasons.

The spokesperson for the ministry of interior in Gaza Strip, Iyad al-Bazem, denied the detentions, but he acknowledged "summoning 38 persons by the security services," arguing that the security services were seeking to avoid any problems or disturb public order during the activity of "lighting the torch" which is organized by the Fatah movement. Al-Bozum said the police intervened to stop a fight between the demonstrators.

Nada Nabil commented that the testimonies collected by the Euro-Med Monitor indicate that many of the demonstrators were detained, stressing that "some of them are still in detention until now."

Nabil added: "Even if the security services claimed that these demonstrations are unauthorized, the police is not entitled to detain or suppress any of those who are responsible, and any such action is considered as an arbitrary action and violates the right to freedom of peaceful assembly freedom of expression and not to be arbitrarily detained. Nabil confirmed "the failure of following the procedures required to obtain permission is not a crime in any way, as well as beating is not a punishment under the law in any case."

Nabil pointed out that the Euro-Med monitor recorded 39 cases of arbitrary detention in Gaza Strip and 33 cases of summons carried out by Hamas security services during 2017, especially the police and internal security services that were founded by "Hamas" after its control of Gaza Strip, noting that this pattern of detentions has dominated during the year 2018.

The Euro-Mediterranean Human Rights Monitor calls on the authorities in the Gaza Strip to immediately release all detainees of expression and to ensure public and individual freedoms to all its citizens. They emphasize that "gagging policy, preventing peaceful demonstrating and restricting freedom of expression has never been a guarantee and an entry point for the political stability of the community. On the contrary, it has been a direct cause of creating tension." 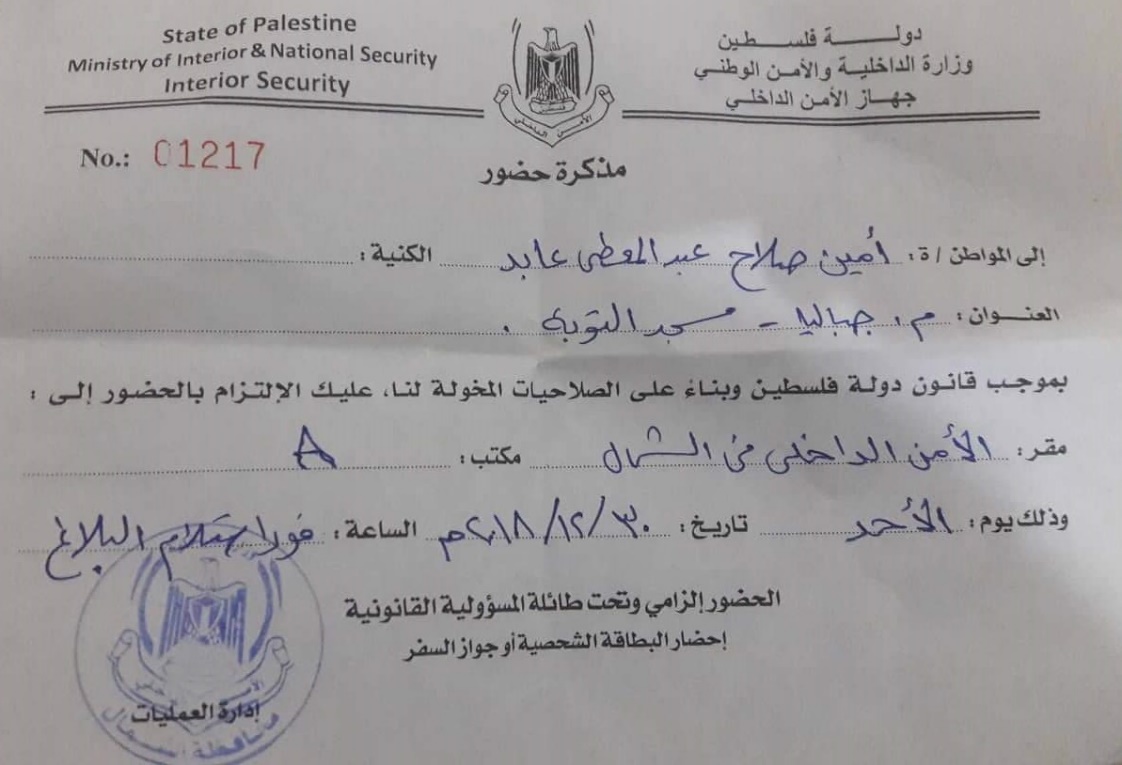 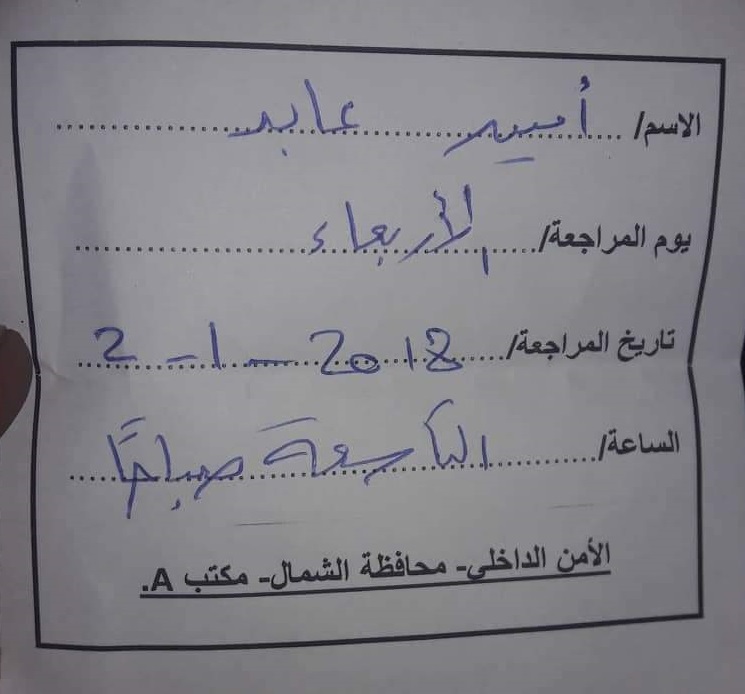