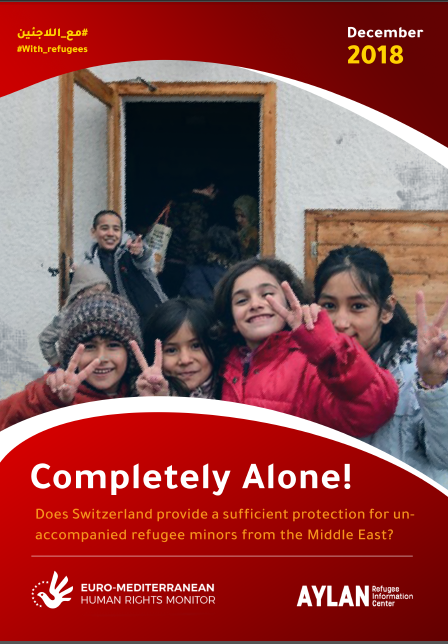 GENEVA - The Euro-Mediterranean Human Rights Monitor and Aylan Refugee Press Centre have issued today a detailed report on Switzerland's policies towards unaccompanied children who arrived to its territory over the past five years as the refugee and asylum crisis to Europe has seen an escalation. The situation of unaccompanied children in Switzerland - the home of major human rights organizations including the United Nations - puts the country through a serious test.

The report, which is part of the Euro-Med participation in the #WithRefugees campaign, concluded that the Swiss government should improve its policies, amend its laws and address the gaps and difficulties faced by these children in accordance with the Convention on the Rights of the Child and international principles of dealing with refugees and asylum seekers.

In their report entitled “Completely Alone!”, the Geneva-based Human Rights organization and Aylan centre stated that unaccompanied refugee children coming from the Middle East to Switzerland in 2017 alone reached a total of 733 children, and despite this low number compared to 31,000 unaccompanied children in Switzerland in total, the Swiss authorities have handled their asylum applications differently based on the policies of the various cantons (municipalities). The children have been subjected to harsh reception conditions in some cantons, while the Swiss legal system still denies them the right to reunite with their families.

The report highlights the legal protection provided by Switzerland to unaccompanied children and the rights granted to them in terms of education, health and reunification, and compares the legal standards of Switzerland with international and European legal standards such as the Dublin Regulation. The report concludes that, although the Swiss legal systems largely conform to the standards set out in the Dublin Regulation and the Convention on the Rights of the Child, they violate certain rules, particularly when it comes to the application of these rules.

The Euro-Med Monitor and Aylan note that Switzerland is not a popular destination for refugees because of the protracted bureaucratic procedures of the Swiss government, complex bureaucracy, complex asylum conditions and restrictions imposed on holders of certain types of humanitarian residences such as protectors Interim. The number of asylum seekers in Switzerland in 2017 amounted to about 18,000, equivalent to only 2.4% of the total number of asylum seekers who arrived in the European continent in the same year, while the percentage of those who were refused to be given refuge in Switzerland in the same year was 23.3%.

Ghada al-Rayyan, a field researcher at the Euro-Med Monitor, said the problem faced by unaccompanied children sometimes starts from the moment they arrive at the border, especially if they do not have a valid travel document enabling them to enter Switzerland. As well as at the border with Italy, where children were strip searched by the Swiss border guards in front of adults, and sometimes forced to return to where they came from, despite the danger they might face, which, according to al-Rayyan, contradicts the principle of Non-refoulment, which is one of the customary international laws, thus pushing children to resort to human traffickers. This exposes them to blackmail, sexual and physical exploitation, or force them to stay near the border without protection or enjoying any legal status.”

The Swiss government justifies its practices against children at the border that it targets only those who do not have valid papers or who have no credible reason to claim asylum in Switzerland. However, al-Rayyan stresses that “the assessment of the intentions of asylum seekers should not be the responsibility of the border guards, but refugees must be allowed to enter the country and submit their request to be studied by the Secretariat of Migration, individually, in accordance with the principle of Non-refoulement.”

The material assistance provided by the authorities to asylum-seekers and foreigners who are temporarily accepted as refugees is less than the regular social assistance provided to Swiss citizens, permanent residents or political refugees, and barely meets the food requirements. Assistance ranges between $350 and $450 per month for children living in centers with adults. NUMBAO (a site that provides accurate information on the cost of living in the world) notes that one person in Switzerland needs about $664 a month for food only.

The report included testimonies of unaccompanied children who spoke of the problems encountered due to the complex asylum system in Switzerland, which severely deprived them of some of their rights.

Salma, a 20-year-old Palestinian-Syrian, said in her testimony to the Euro-Med Monitor team that she had been brought to Switzerland at the age of 16 and had no nationality. “I do not have the right to complete my secondary school, so I do not have the right to enter the university. I went to one of the vocational training programs offered by the canton, but I decided to leave the training and strengthen my German language by studying online for the Swiss High School Certificate.” She adds: “I tried in many ways to join the regular classes at the Swiss secondary schools or even to attend as a listener, but the canton did not allow me to do so, and it took me two years to study the material at home, so that I could do the high school exam and I did well.”

According to the Euro-Med Monitor, the story of Salma was experienced by many asylum seekers minors, where Swiss laws deny minor asylum seeker the right to go to school if they are older than 16 years (compulsory education age), which makes those who arrive in Switzerland at this age lost, due to their inability to complete their secondary education, let alone their university education.

The report pointed to the big differences between cantons in dealing with unaccompanied children in Switzerland, which was criticized by the United Nations Committee on the Rights of the Child as “a matter of luck for children seeking asylum, where they face different circumstances and destinies according to the canton to which they were admitted, which creates a kind of unjustified discrimination.”

The report points to the different manner in which cantons deal with the children in relation to their right to have legal assistance during hearings. Some cantons do so, while unaccompanied children in other cantons, such as Canton Argao and Canton Soloturn in northwestern Switzerland, go to hearings on their own without receiving any assistance.

In terms of housing rights, some cantons offer rooms in private shelters, while child care is provided, while other cantons in Basel and Soloturn do not provide residential facilities for minors. Young people are allocated to foster families for care, while adolescents are put in mixed rooms with minor asylum seekers, while lacking special or psychological care, and may be subject to abuse.

In a clear discrimination between children in Switzerland, the report notes that the Swiss General Immigration Secretariat allows a child of Swiss nationality only to apply for reunification with non-Swiss parents, who have the right to custody. In contrast, refugee children with permanent or temporary residence are not granted this right, which may violate Article 2 of the Convention on the Rights of the Child, which prohibits discrimination between children on any ground.

The report criticized what it called “procrastination by the Swiss authorities to decide on asylum applications for unaccompanied minor children”, where the child reaches the legal age (18 years old) while waiting for a decision on the asylum application. At the age of 18, the child is treated as an adult so as to facilitate children’s return to home countries if their application for asylum is rejected.

“In fact, these procrastinations are unacceptable and incompatible with the best interests of the child guaranteed under the International Convention on the Rights of the Child. They keep the children suspended for years without knowing their fate and deprive them of many of their rights," said Sara Pritchett, the spokeswoman for the Euro-Med.

Pritchett said the Euro-Med Monitor hopes that the recent amendments by the State Secretariat for Migration (SEM), which will take effect at the beginning of this year, will lead to a real improvement in the situation of unaccompanied children. Among the improvements adopted was the standardization of living conditions of children in all federal centers. She also stressed that “further adjustments and improvements are still required, especially in terms of reunification laws and shortening the length of period allocated for the consideration of applications of refugee children.”

The Euro-Med Monitor and Aylan called on the Swiss authorities to respect the best interests of the children in all decisions and circumstances in which the unaccompanied children are placed. The Geneva-based group called for equality among children in their basic rights regardless of the legal status of the children, their place of residence or the protection they receive. Unaccompanied persons have the right to reunite with their families in accordance with international standards.

The Euro-Med Monitor and Aylan stressed the need to abide by the principle of non-refoulement and to allow unaccompanied children arriving at the borders of Switzerland to apply for asylum in a smooth and easy manner, taking into account their age and psychological condition.