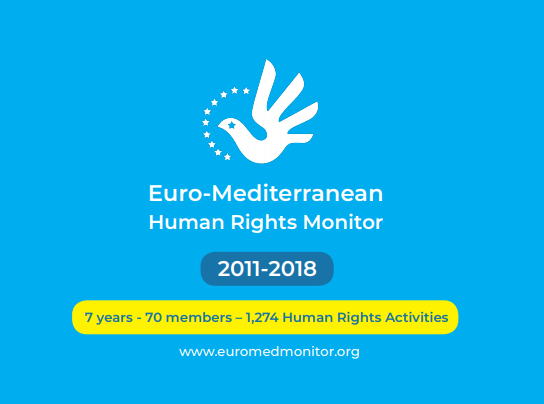 The Euro-Mediterranean Human Rights Monitor is a youth-led independent, nonprofit organization that advocates for the human rights of all persons across Europe and the MENA region, particularly those who live under occupation, in the throes of war or political unrest and/ or have been displaced due to persecution or armed conflict.

Euro-Med Monitor was established in November 2011 and is registered in Switzerland (CH-660.0.748.015-1), where it maintains its official headquarters. It was founded by a group of European youth from diverse origins, MENA immigrants and students living in Europe, who were inspired by the people’s will to rebel against tyranny and oppression that swept through the Arab region in 2011 and continues to percolate everywhere. Euro-Med Monitor strives to support these movements by planting the seeds for international mobilization and stimulating human rights organizations and decision-makers to focus on violation of the people’s right to expression and freedom.