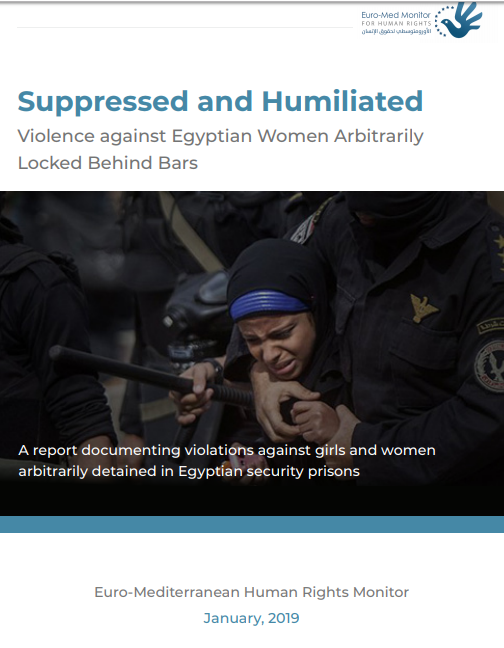 Geneva - The Euro-Mediterranean Human Rights Monitor issued a detailed report on the serious violations against girls and women detained arbitrarily in the Egyptian security services’ prisons.

While the number of detained women with political backgrounds in Egypt is 64, five other women are still in enforced disappearance and their whereabouts are still unknown, the report reveals.

Titled, “Suppressed and Humiliated: Violence against Egyptian Women Arbitrarily Locked Behind Bars”, the report refers to arbitrary detention, torture and violence against women in Egyptian prisons, uncovering the general situation of detainees and their treatment in places of detention.

The report included detailed statistics on the situation of women detainees in Egypt and a review of five cases of women who are arbitrarily detained under harsh conditions.

Euro-Med Monitor pointed out in the report that Egyptian women, especially those with political affiliations opposing the Egyptian regime, are always exposed to increasing political harassment, which is illegal under Egyptian law and binding executive regulations.

The situation in Egyptian detention centers, especially for women, is subject to the absence of a "principle of accountability" where a culture of impunity prevails, giving those who manage these prisons the green light to commit violations freely and without restrictions.

There are five prisons in Egypt dedicated to women, located in the main governorates. These prisons neither abide by the minimum standards of human life nor meet the minimum conditions for the treatment of prisoners.

The report included several complaints from women who were detained regarding the way they used to be searched, during which they were intentionally humiliated and degradingly treated by abusive actions, such as deliberately touching their body parts in an exaggerated manner, despite the presence of alternative electronic equipment commonly used to do so.

The report included examples of serious violations against Egyptian women during their detention in Egyptian prisons. Among these cases was Sara Abdullah, a 30-year-old doctor who was exposed to the worst forms of torture at the State Security Headquarters.

Sarah was electrified and threatened with rape if she did not confess. She was arrested on the 17th of September 2015, along with her sister and father, after being accused of being part of “bombing the Niger embassy” plot.

Journalist Alia Nasr Eddine Awad, 31, said that her arrest took place on the 23rd of October 2017, from inside a Cairo court, while filming a trial session as part of her work as a journalist. She was placed under enforced disappearance for 5 days and then appeared in Helwan Police Station.

Alia was exposed to severe torture and cruel treatment, including beatings, after being accused of promoting ideas of hatred of the regime. Alia is still in her solitary confinement at al-Qanater prison, where she was transferred in January 2018, following the medical negligence she experienced after doctors found out that she had a benign tumour in her uterus.

Alia had to undergo urgent medical surgery, but the administration of the prison of al-Qanater rejected her request and delayed her until she became ill with severe bleeding and anaemia during which she lost more than half of her weight.

Euro-Med Monitor reviewed several other testimonies, among them was the testimony of Amal Fathi, who spoke of harassment, and was sentenced to imprisonment, and Samya Maher, a victim of enforced disappearance and denial of visits since October 2017.

Another case is that of Ola Al-Qaradawi, whose crime appears to her being the daughter of Yusuf al-Qaradawi, who is known as the spiritual leader of the Muslim Brotherhood.

The report concluded that it is the duty of the Egyptian authorities, and in particular the Prisons Service, to abide by the established legal principles and rules, which prohibit arbitrary detention, torture, enforced disappearance as well as cruel and inhuman treatment.

Euro-Med Monitor Spokeswoman Sarah Pritchett stressed the duty of the Egyptian authorities, as part of their international obligations, to abide by human rights standards in all executive, legislative and judicial measures related to the arbitrary detention of women, their fair trial or conditions of detention.

Pritchett noted that Article 2, paragraph 1, of the Convention against Torture provided that “No exceptional circumstances whatsoever, whether a state of war or a threat of war, internal political instability or any other public emergency, may be invoked as a justification of torture.”

Concluding the report, The Euro-Mediterranean Human Rights Monitor called on the international community, particularly the commissions and special rapporteurs, to investigate crimes committed in Egypt, including by the Working Group on Arbitrary Detention, the Special Rapporteur on Torture, the Committee against Torture, the Special Rapporteur on the rights of women, and the Working Group on Enforced or Involuntary Disappearances, urging them to monitor the situation in Egypt closely, to document violations, to press the Egyptian authorities to stop these violations completely and immediately, and to bring those responsible to justice.