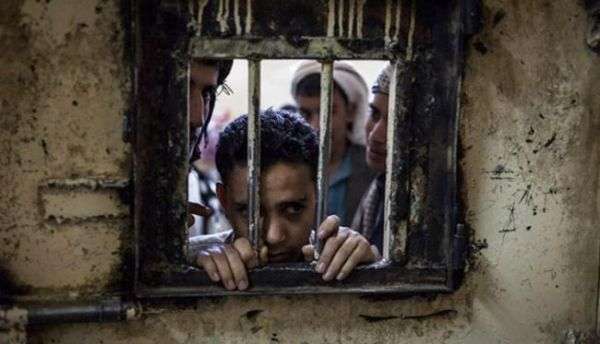 Geneva - The Euro-Mediterranean Human Rights Monitor condemned the continued torture as well as and inhuman and degrading treatment of dozens of Yemeni prisoners by Houthi group in Yemen, revealing that torture is a systematic feature in these prisons.

We are following the proceedings of the trial of 36 Yemenis, including dissidents, journalists and human rights activists based on seemingly trumped-up charges of assassination or espionage for the Arab coalition forces, said the Geneva-based Euro-Med Monitor. They are tried in the absence of any guarantees of fair trials, the nonprofit group added.

Euro-Med Monitor had earlier received testimonies about these 36 detainees, asserting that many trial sessions lacked proper legal procedures. Most of the trials were preceded by a series of serious violations of detainees before and during their presentation to the court, including physical torture, and secret transport from one facility to another for months without informing their families of their places of detention or even allowing them access to a lawyer.

Euro-Med Monitor expressed concern for the fate of the detainees after some of them were absent to the last trial session held on April 2, 2019, as was the case with Dr. Youssef Al-Bawab, who did not attend the trial session, raising fears about his fate. Al-Bawab also no longer appeared inside the prison as well, and the authorities that arrested him refrained from making any details about his fate.

It was reported that all the detainees in the case were subjected to torture and inhuman treatment. Members of the Houthi security forces reportedly beat them with sticks, batons and iron chains, and stripped them of clothes except for prison uniforms in an attempt to harass and humiliate them.

Most of the detainees are confined to solitary cells and are prevented from eating food and medicine, putting their lives at great risk and making their health conditions even worse. Their bodies appear to have the effects of malnutrition and lack of medical care.

The families of the detainees said that the court did not respond to the demands of the defense, especially with regard to the request to reveal the fate of Dr. Yousef al-Bawab, preventing his relatives from visiting him.

In the same context, sources reported that one of the detainees was beaten by a security officer in the presence of judges because of his request to borrow a pen from a lawyer. The court never held the security officer to account.

Since the beginning of the conflict, the Houthi group has used the penal court under its control in the Yemeni capital of Sana'a, holding political opponents to trial after accusing them of engaging with foreign hostile entities.

Sarah Pritchett, Euro-Med Monitor’s spokeswoman calls on the international community to pressure the Houthi group to stop the ongoing violations of the rights of its detainees, to stop systematic torture against them and to ensure fair trials and compliance with international conventions and norms on human rights.

Pritchett further calls on the Houthi group to immediately disclose the fate of Dr. Yousef al-Bawab, as they bear full responsibility for his safety and the safety of all detainees in their prisons.

The Houthi group had made extrajudicial verdicts to get rid of dissents, and it is clear that most of the sentences issued by the judiciary are politically motivated.

The Houthi group is fully responsible for the life of its detainees, said Euro-Med Monitor, calling for an immediate end to the systematic torture of detainees and the referral of the perpetrators to the competent courts, also calling on the group to move away from politicizing the judiciary and its use to settle accounts with political opponents.