Strangers in their Land: new report by Euro-Med documents Israeli violations against Palestinians in Jerusalem 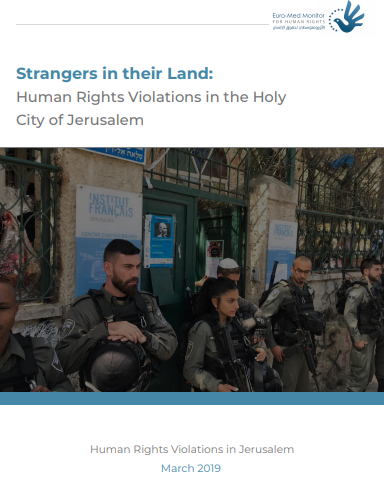 Titled “Strangers in their Land: Human Rights Violations in the Holy City,” the report documents Israel’s systematic and deliberate escalation policies and illegal practices, which constitute gross human rights violations against Palestinians in the occupied city of Jerusalem.

The Trump administration’s decision in late 2017 gave the green light to the Israeli authorities to continue and escalate their flagrant violations against the Palestinian people in general and those of occupied Jerusalem in particular, in an attempt to obliterate the Arab, Christian and Islamic identities from the Holy City, the report stressed.

The report documents cases where Israel deliberately shut down social and political activities and events organized in Jerusalem, revealing that the long-term contribution would be erasing the Palestinian identity from the public scene in Jerusalem.

The report monitors grave violations committed by the Israeli authorities against the Palestinian population of Jerusalem, including procedures followed during and after their arrest, such as home searches without a judicial warrant and high fines.

Concluding the report, the Euro-Mediterranean Human Rights Monitor calls on the international community to act seriously and effectively to stop Israeli policies in violation of international law, including displacement, abuse, and arbitrary detention practices, and calls for safeguarding freedoms, especially relating to religion.

Euro-Med Monitor also condemns in the strongest terms the blatant violations of the rights of Jerusalemites to live in dignity and without racial discrimination, especially as the Israeli municipality continues to deny Palestinians an organizational plan to regulate construction in East Jerusalem.

Euro-Med Monitor further urged human rights organizations to highlight the seriousness of the measures taken by the Israeli occupation authorities regarding the policy of sudden demolition without warning, including the destruction of properties with families’ belongings buried under the rubble.