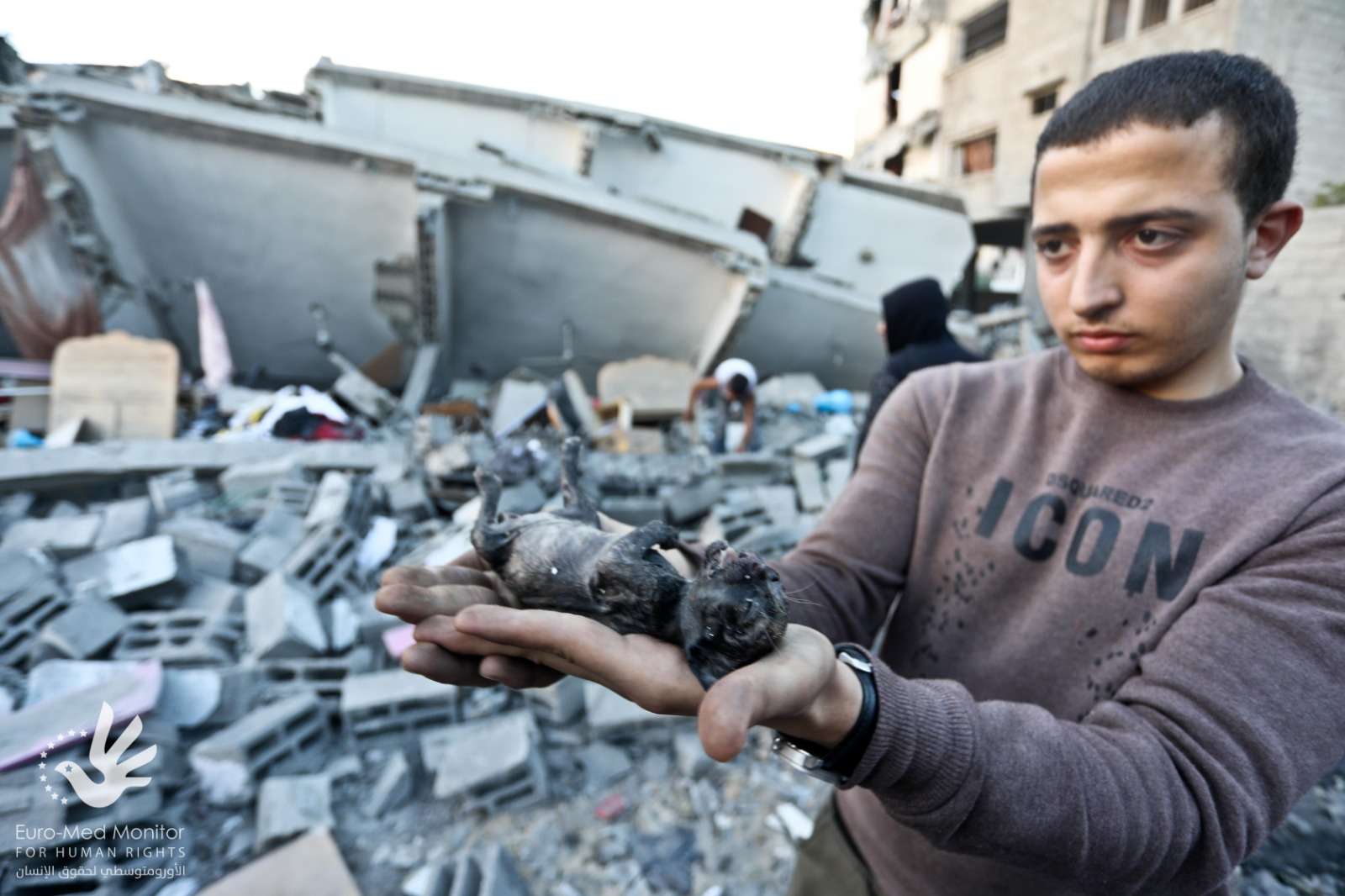 Geneva-The Gaza Strip has been under Israeli siege for 13 years and recent escalation against the Gaza Strip, from Friday 3 to Sunday 5 May 2019, has claimed the lives of 27 Palestinians. The majority of them are civilian casualties including two women, their two sons and a girl. In addition to this, nearly 100 Palestinians have been injured during the continuing Israeli bombing of the Gaza Strip. At the same time, only four Israelis were reported killed by Palestinian projectiles fired from the coastal enclave during the escalation in response to the deliberate killing of a Palestinian protestor at the Gaza- Israeli border.

This escalation came to an end during the night of 5-6 May when parties agreed to a ceasefire thanks to the arbitration of Egypt.

The Euro-Mediterranean Human Rights Monitor (Euro-Med Monitor) is deeply concerned that this recent escalation of violence affected civilians disproportionately. Israeli attacks impacted and destroyed Palestinian facilities including residential and commercial buildings, which are home for international and Palestinians institutions as the office of the Turkish Anadolu Agency and the Turkish Yardim el Society. Israeli forces targeted residential buildings in Gaza, such as the buildings of Qtifan, Romoz and Khozindar as well as Building No. 12 in Sheikh Zayed City, make dozens of families homeless. They also targeted empty lands adjacent to educational institutions, such as the University of Palestine and Al-Azhar University in the Middle Area of the Gaza Strip.

Euro-Med Monitor is gravely concerned by these developments, which only worsens the lives of Palestinians in the Gaza Strip and violate several international humanitarian and human rights law. Euro-Med Monitor holds the Israeli occupying authority accountable for the lives of Palestinian civilians in accordance with the rules of international law.

First, the destruction of civilian properties is unlawful under humanitarian law if not justified by military necessity, as stated by article 147 of the 1949 Fourth Geneva Convention. The prohibition of destruction of properties is enshrined in article 25 of the 1907 Hague Regulations on the Laws and Customs of War on Land prohibiting the “attack or bombardment of cities, villages, dwellings and unprotected buildings” and article 53 of the 1949 Fourth Geneva Convention stating that "the Occupying Power shall not destroy any private property, unless the hostilities inevitably require such destruction". Moreover, it constitutes a war crime under 8.2, b.2 of the Statute of the International Criminal Court.

Second, the attacks are contrary to the principle of necessity and article 52 (3) of Additional Protocol I to the 1949 Geneva Conventions, which determined that if there was doubt as to whether a place was normally used for civilian purposes, it would be used to make an effective contribution to military action, it is assumed that it is not used to prove otherwise. Article 57 ads that "all feasible precautions must be taken when choosing methods of attack in order to avoid causing casualties", including by giving "advance warning and feasible means in case of attacks that may affect the civilian population". Therefore, destruction of property is illegal if it is not 'proportionate', compared to the military advantage it achieves and the damage that can occur.

Euro-Med Monitor stresses that the Israeli authorities have deliberately targeted civilian objects in the Gaza Strip since Saturday, 4 May 2019, far beyond military necessity and therefore are breaching international law.

Euro-Med Monitor expresses its strong condemnation of the brutal aggression on the Gaza Strip, and calls on all concerned bodies of the United Nations to exert pressure to force Israel to respect international law.

Euro-Med Monitor calls on parties to the conflict to respect the 1949 Geneva Conventions, which shall be respected in the Occupied Palestinian Territory, including East Jerusalem, and other Arab territories occupied by Israel since 1967, as recalled by the UN General Assembly Resolution A/72/448 of 7 December 2017.

Euro-Med Monitor calls on parties to the conflict and all brokers involved to take actions to take steps toward the end of the siege of Gaza and Israeli restrictions imposed on the people of Gaza, which made their life unbearable, and to improve the conditions of life in Gaza without conditions. Euro-Med recalls, as the United Nations studies stated, that Gaza would be unliveable by 2020. Therefore, today more than anytime else, Gaza is in need for calmness and security and Israel should end its siege of Gaza and allow Palestinians there to lead a normal life.

Euro-Med Monitor calls for the end of military aggression against the Gaza Strip, and condemns such acts, which are in blatant violation of international human rights and humanitarian law.

Euro-Med Monitor calls for accountability and the opening of investigations on the unlawful killing of civilians by Israel military.

Euro-Med Monitor believes that as long as Israel occupies the Palestinian territories and imposes a siege on the Gaza Strip, the possibility of outbreak of yet another conflict in the Gaza Strip would always remain high and the cycle of violence would renew again.