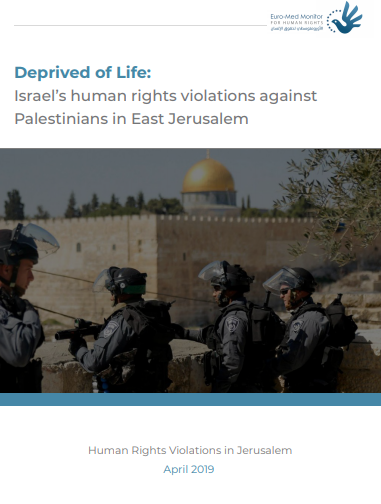 Deprived of Life: New report by Euro-Med Monitor documents 130 violations by Israel against Palestinians in Jerusalem during April 2019

Geneva - The Euro-Mediterranean Human Rights Monitor published a detailed human rights report on Israel's unjust policies against Palestinians, including arbitrary detention, expulsions, demolitions of residential and other buildings and facilities, evictions, home raids and restrictions on public freedoms throughout April 2019.

There’s ample evidence to Israel’s discriminatory policies in Jerusalem against Palestinians, the report found, including on the seizure of lands and denial of building permits, calling on the international community to act to protect the Palestinians from the systematic practices against them.

Titled “Deprived of Life”, the report documents Israel’s escalating policies and practices of human rights violations against Palestinians in occupied Jerusalem that have increased in size and intensity following US President Donald Trump's decision in late 2017 to transfer the US Embassy to Jerusalem as the unified capital of the State of Israel.

This event has given Israel a green light to continue and escalate its violations against the Palestinians in general, and residents of the occupied city of Jerusalem in particular.

The Israeli occupation practices collective punishment against the Palestinians without any legal excuse, the report indicates, stressing the arbitrariness of administrative detention used by the Israeli authorities in many cases. The detention can be extended for up to one year without charges and with sheer disregard for due process.

The report mentioned dozens of cases of administrative detentions, most of which were carried out by youths who were not charged, including Adnan al-Rajabi, 26, who was administratively detained weeks after his marriage.

He added that the International Covenant on Civil and Political Rights (ICCPR) prohibits in article 7 arbitrary detention, stipulating that “No one shall be subjected to arbitrary arrest or detention. No one shall be deprived of his liberty except on such grounds and in accordance with such procedure as are established by law.”

According to the report, which documents the testimonies of detainees, Rajabi said: "This is a politically and arbitrarily abusive pursuit. Since the first day of my arrest, they interrogated me for only a few hours. They did not make a specific accusation against me. I did not understand what the investigation was about. , And then spent the rest of the days in solitary confinement and then issued administrative detention order in my right, on the basis of confidential information I do not know the content. "

The report shows numerous cases of house demolitions where the Israeli authorities forced Palestinians to demolish their own homes in order to avoid paying large sums of money for the costs of demolition by the Israeli occupation municipality in Jerusalem.

The report mentioned the case of Muhammad al-Shweiki, whose house was demolished prior to the set date for demolition, by Israeli bulldozers and forced by the Israeli authorities to pay the costs of the machinery and workers after he was prevented from entering the house to take out the medication for a member of his family.

The Euro-Med Monitor for Human Rights called on the international community to shoulder their responsibilities for Jerusalem and its residents, who are subjected to grave violations aimed at evicting and expelling them, demanding protection for them as residents of an occupied territory under Security Council and General Assembly resolutions.

Euro-Med Monitor urged the United Nations and its concerned bodies as well as the European Union to closely monitor the situation in Jerusalem and to condemn the harsh acts to which Palestinians are subjected and to shoulder their responsibilities towards the Palestinians under occupation.