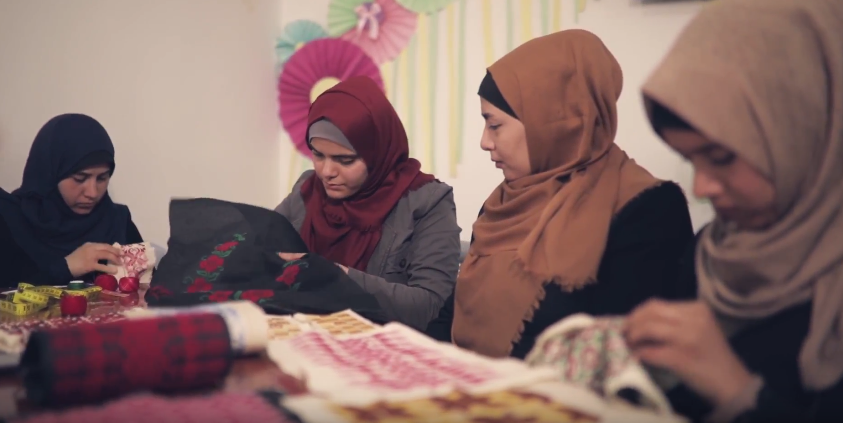 Gaza – As part of the Women's Leadership Incubator project, the Women and Children Development Association in Khan Younis has concluded "Let Her Speak" initiative. The project, lunched by The Euro-Mediterranean Human Rights Monitor, aims to promote women’s role in the Gaza Strip and help integrate them into the society, and was sponsored by Raham Austria Association and the Swedish Kvinna Till Kvinna organization.

The initiative targeted 30 deaf women by training and providing them with various skills in handicrafts and embroidery, in order to help them improve their financial situation and enable them earn a steady income, in addition to improving their social relationships and presence on social media.

Fatima Shaat, the initiative's coordinator, said that the initiative provided a great assistance to the participating women, as they learned new techniques and professions to help them improve their living conditions, especially in light of the difficult economic conditions in the Gaza Strip.

She added that the participants managed within three months to establish their own work, noting that some of them have practiced the profession of embroidery and have started online stores to market their work.

Nadia Al-Farra, one of initiative's participants, said the project provided her with a source of income at the beginning of her work in handicrafts and embroidery, as she began to promote her work to friends and neighbors.

Al-Farra said that for many years she believed that her role in social life was not active, because she can't hear, and it was difficult for her to have a normal life, but she mastered embroidery and began marketing her work after her participation in the initiative, which enabled her help her family as well.

The Euro-Mediterranean Human Rights Monitor carried out the second round of the Women's Leadership Incubator project, funded by the Raham Austria Association and Kvinna Till Kvinna. The project aims to enable women in the Gaza Strip to exercise their rights after raising their awareness, which enabled them to prepare plans to improve their economic and social conditions.