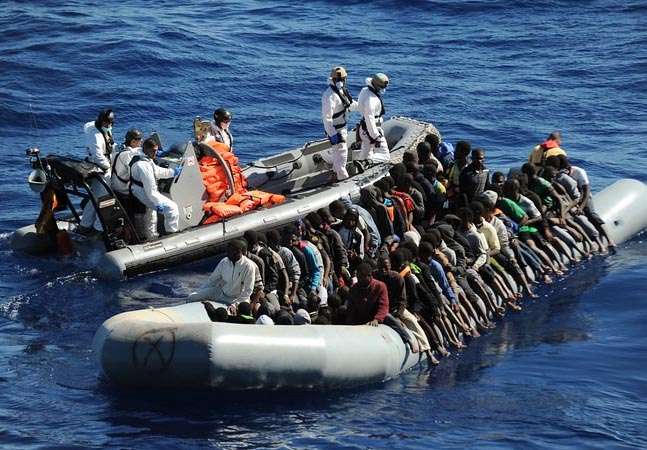 The Euro-Med Monitor notes that rescuing migrants does not constitute a crime and is essentially a great application of the principles of international law at sea, international humanitarian law and maritime law, which make it obligatory to assist people who are in danger, in this case of death. However, the Euro-Med Monitor further notes, there are still European countries that block ships with rescued migrants from docking in their ports, such as Italy and Spain.

According to media reports, a leaked letter signed by Spain’s Merchant Marine chief has threatened the Spanish NGO ‘Open Arms’ with fines of up to 900,000 euros should it rescue any migrant drowning in the Mediterranean. The letter warns that search and rescue operations must not be carried out unless approved by the authorities in charge of the search and rescue region (Italy and Malta).

The Euro-Med Monitor is also alarmed by how said EU countries are trying to manipulate and frame migrant-rescue missions as an activity of human trafficking. Rescuing migrants is a selfless act motivated by the wish to provide life-saving aid to people who would otherwise drown and die, whereas human trafficking, par definition, entails an extorted return from vulnerable groups such as the trade of humans for the purpose of forced labor, sexual slavery, or commercial sexual exploitation for the trafficker or others.

Unfortunately, restrictions on organizations or activists working for the defense of the rights of migrants are nothing new in Europe. For example, the activist Miguel Roldan faces up to 20 years in jail for helping migrants drowning at sea. In addition to Roldan, Carola Rackete, a captain of the German NGO ‘Sea Watch’ was placed under house-arrest for two days for entering Italian territorial waters to disembark 40 migrants rescued in the Mediterranean without authorization.

“There is no more urgent threat faced to life than by those migrants drowning at sea. EU countries, including Spain, should not threaten and punish NGOs that are left with no other choice but to rescue migrants”, says Selin Yasar, Euro-Med’s spokesperson.

These restrictions by EU member states contradict Item 9, the EU’s own statement to the United Nations Human Rights Council on plans towards implementing the 2001 Durban Declaration that proposes concrete measures to combat racial discrimination, xenophobia and related intolerance.

Therefore, the Euro-Med Monitor calls on the newly elected EU Council to place pressure on EU countries that refuse to rescue migrants drowning in their territorial waters and to remove restrictions on activists and organizations that aim to rescue people in danger at sea.