Testimonies from the Taji prison in Iraq reveal horrific abuses 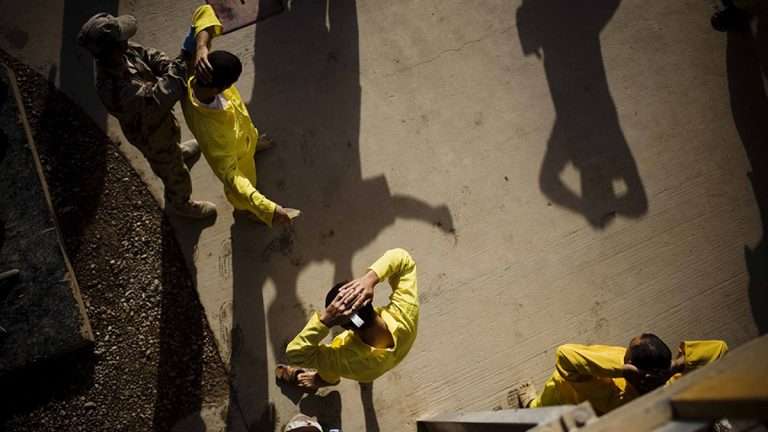 Geneva – The Euro-Mediterranean Human Rights Monitor and the Iraqi Center for the Documentation of War Crimes said in a joint statement that the Iraqi security forces continue to carry out serious violations against detainees in its prisons. The two organizations revealed testimonies of prisoners in Taji prison, north of Baghdad, which reflect the harsh conditions they suffer from as they are deprived of their most basic rights.

The Iraqi security forces are practicing a policy of humiliation and persecution against detainees, depriving them of good health condition and psychological safety, food and ventilation, which caused the death of some of them inside the prisons, in addition to the continuing financial crisis of the detainees, the two organizations said.

Detainees in the Taji prison sent an appeal to activists and media outlets to shed light on their situation and to pressure the decision-makers in the Iraqi government to improve their conditions. They sat July the 17th as a date to launch a solidarity campaign which will continue till the 20th of the same month.

According to testimonies, the Taji prison lacks the lowest standards of correctional prisons, where prisoners are kept inside a large camp and treated without regard to international standards in relation to the treatment of prisoners.

“Security officers inside the prison swear at us, beat us without any justification, tamper with personal belongings, and throw rotten foods on the Quran in an attempt to provoke prisoners,” Q.S, an ex-prisoner, who asked to be identified by his initials, said. He confirmed that security officers used to insult Sunni religious symbols, provocatively chanting sectarian slogans.

In another testimony, M.R, an ex-prisoner, who asked to be identified by his initials, stressed that the Iraqi national security forces and the rapid intervention and emergency forces have increased their violation of the rights of prisoners recently, denying them practicing their religious rites such as praying. At the same time, the Iraqi Constitution grants in its second article the right of religious freedom for all.

According to J.S, as a result of stuffing a large number of detainees in small areas, prisons lack essential services and humanitarian supplies, such as ventilation, which resulted in 3-5 cases of suffocation in the hot summer. In addition, as a result of the lack of medical care, diseases spread among prisoners in addition to rodents and the accumulation of waste inside the prison. Moreover, food is being transferred to prisoners in waste containers, as there are no special vehicles for doing so.

Prisoners are suffering to get food inside the prison both in terms of quantity and quality. Prison stores are filled with expired foods that are distributed among prisoners. In addition, the prison’s administration bans salt, which causes many of them to suffer from a drop-in blood pressure and increases their health problems in addition to preventing them from being exposed to sunlight.

Although prisoners demand their legitimate human rights to clean food and water at the prison, the prison’s administration constantly ignores their demands, worsening their situation and suffering.

T.S, who asked to be identified by his initials, said that the prison’s canteen sells supplies to prisoners at double prices noting that more than 140 million Iraqi dinars of the prisoners' money, which was deposited by their relatives, were lost during their visits in mysterious circumstances, according to the prison’s administration.

According to information provided by the two human rights organizations, the Iraqi security forces have fabricated charges against the prisoners after being subjected to interrogation and solitary confinement with some of them being deported to prisons in other governorates.

K.M, who asked to be identified by his initials, said that the Iraqi national security officers have connections with prisoners known as ‘sources;, and their task is to deceive to detainees by telling them that they can extend the duration of their family visits in exchange for information about prisoners. They torture and force them to pay money to stop this humiliating process. The prison’s administration transfers some prisoners to prisons in the south of the country through dangerous roads controlled by sectarian militias, putting the lives of prisoners and their relatives at the risk of kidnapping.

It is estimated that the number of detainees on charges of terrorism in the prisons of the Iraqi government amounted to about 17,000 detainees, including 1,875 women.

The Euro-Mediterranean Human Rights Monitor and the Iraqi Center for the Documentation of War Crimes found that the illegal treatment of prisoners at the Taji Prison violates the rights of prisoners and detainees guaranteed by international and humanitarian law, which stipulates that local authorities should provide the minimum standard rules for prisoners, including the basic needs of the prisoners, such as food, sleep, and health and psychological safety.

The two organizations called on all international bodies, especially the United Nations and the International Committee of the Red Cross (ICRC), to save hundreds of prisoners deprived of the most basic human rights due to the Iraqi government’s denial of their situation.