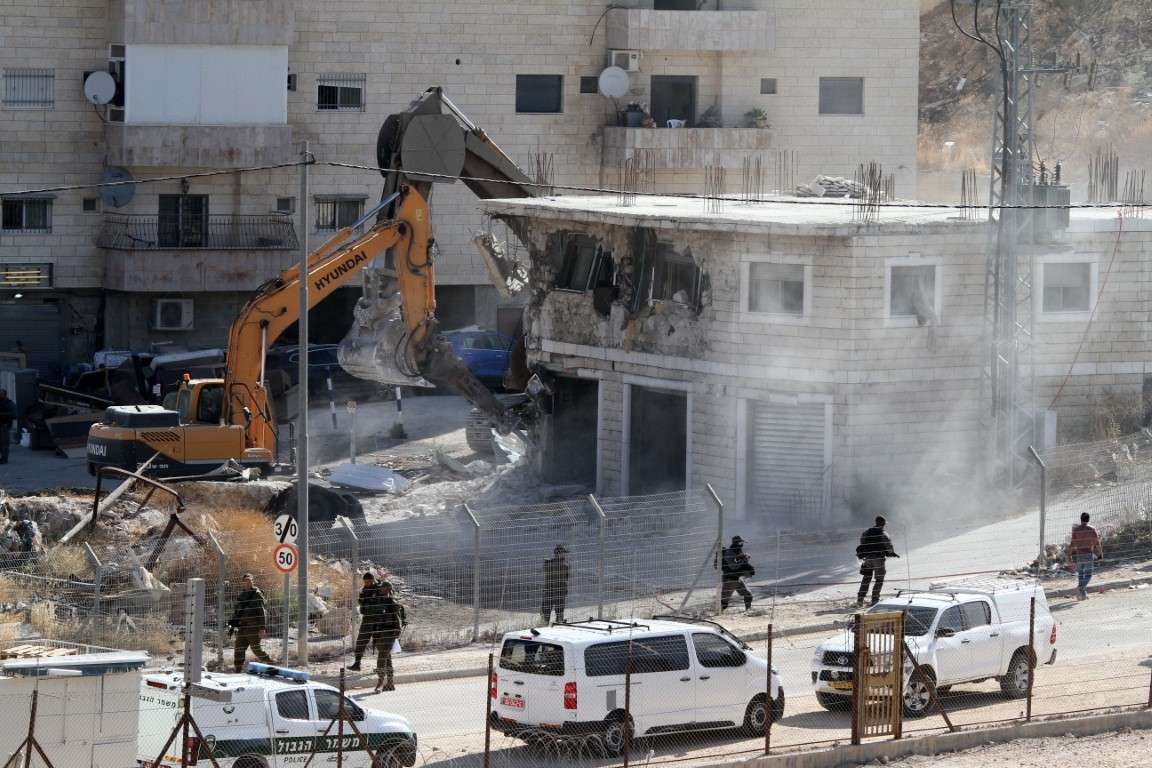 Geneva - The Euro-Mediterranean Human Rights Monitor and HUMENA for Human Rights and Civil Participation said in a statement that the systematic destruction of Palestinian homes and property in occupied East Jerusalem is approved by the US administration, which legalized these crimes by declaring Jerusalem the capital of Israel amid international silence that amounts to complicity.

In a report that monitored human rights violations in Jerusalem during July 2019, the Euro-Med Monitor and HUMENA said that Israeli authorities have stepped up their arbitrary violations against Palestinians living in occupied East Jerusalem. Last month witnessed the largest mass destruction in a single day since 1967 as Israeli authorities demolished 11 residential buildings (72 apartments) in a crime amounting to ethnic cleansing.

The report, entitled "Wadi al-Hummus in Jerusalem; facing Israeli ethnic cleansing," said that the destruction of Palestinian buildings resulted in the displacement of 22 people, including (14) children, and deprived more than (70) families from their apartments, most of which were still under construction.

The report added that since the beginning of 2019, Israeli authorities destroyed more than 59 houses in East Jerusalem until mid-2019. While 2018 witnessed 215 demolitions.

In addition to Wadi al- Hummus neighborhood, Israeli occupation forces destroyed a car park, a garage, a warehouse, a car wash and five shops in the last month.

The Euro-Med Monitor and HUMENA monitored five complex violations as part of crimes of settlement expansion and Judaization of the occupied city,  most notably the seizure of a Palestinian house and a building evacuation by force in order to hand both over to Israeli settlers. Moreover, at the same time of the demolition of Palestinian homes, Israeli occupation authorities approved the establishment of 216 new housing units in the Gilo settlement.

Several parties, including the Israeli government, municipal authorities of Jerusalem or judicial authorities, collude to carry out systematic demolitions aimed to forcefully displace Palestinians. Which falls within the occupation's efforts to change the demographic reality in the occupied city.

This systematic policy pursued by Israel takes place without any regards to the principles of international law, which reflects Israel’s pursuit of demographic change in East Jerusalem by employing all its government, political and security arms.

On the other hand, the two organizations documented two incidents that signify the Israeli occupation's disregard for Palestinian childhood; such as the summoning of 4-year-old Mohammed Rabi 'Alayyan, and the 6-year-old Qais Firas Obeid, under the pretext of throwing stones at their forces.

The report also documented 43 Israeli raids on different towns and neighborhoods in occupied East Jerusalem; which entailed the arrest of 102 civilians, including 19 children, a woman, a girl and a female journalist.

For instance, in five raids that included shooting and direct assault in the neighborhoods of occupied East Jerusalem, Israeli forces injured seven civilians, including a child, a journalist and an elderly.

The report warned that the silence of the international community after said home demolitions in Wadi al-Hummus – which amounts to a war crime of  ethnic cleansing – would essentially encourage the Israeli occupation to continue and escalate the policy of house demolitions and forceful displacement of Palestinians in East Jerusalem. The Israeli policy of handing notifications of imminent demolition to Palestinians in the city continues, especially amidst rumors of Israeli plans to destroy more than 25 Palestinian houses under the pretext lacking permits, which Israel rarely grants to any Palestinian properties in the city.

The report also called on the international community to assume its responsibilities towards protecting East Jerusalem and its Palestinian population as inhabitants of an occupied territory, in accordance with the resolutions of the UN Security Council and the UN General Assembly, particularly resolution 181.

The two organizations stressed the need for ending the policy of racial discrimination between Palestinians and Israelis through advancing necessary investigations, prosecution and trial procedures to put an end to such violations. They finally called on international organizations concerned with childhood to urgently intervene to protect Palestinian children in East Jerusalem from Israeli arbitrary arrests, summons and house arrests.