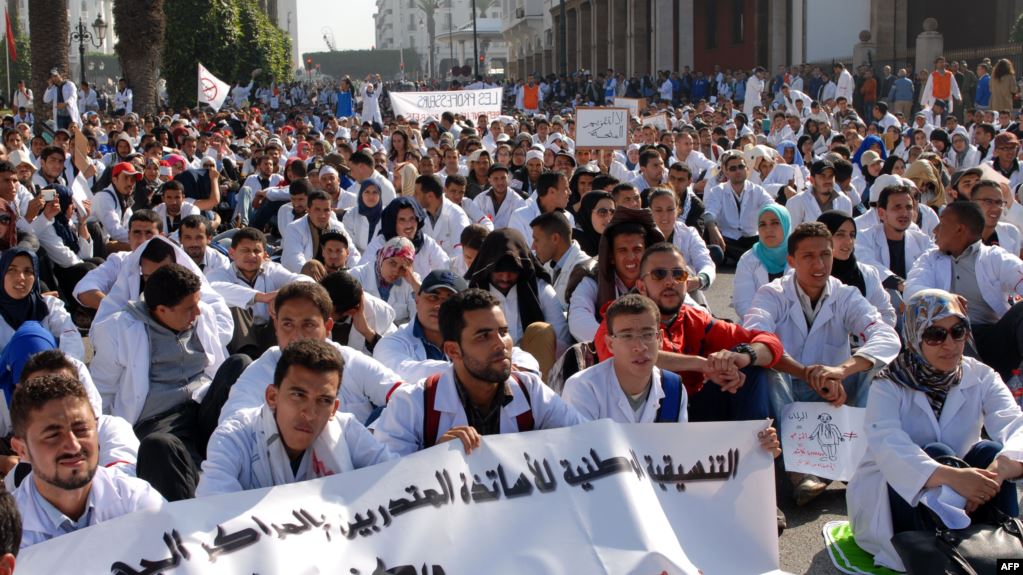 Geneva- The Euro-Mediterranean Human Rights Monitor is following with concern the protests of medical students at faculties of medicine in the Kingdom of Morocco and the unjustified arbitrary measures taken by the authorities against them, the Geneva-based organization said in a press release.

The Euro-Med Monitor criticized in a press release the decision of the Moroccan Ministry of Education to arrest three medical professors, Said Amal, Ismail Ramouz and Ahmed Belhous, freezing their monthly wages and referring them to the disciplinary board.

It pointed out that move is a retaliatory punitive action over the positions of the professors and their declared support for students who decided to boycott the exams in protest of the lack of action from the Moroccan ministries of Education and Health regarding their demands.

Protests by medical students in Morocco have been going on since February over the privatization of medical studies and the accompanying violations of the rights of students in public colleges.

A few days ago, the National Coordinating Body for Medical Students in Morocco announced a national protest in Rabat after the government refused to respond to some of their demands and threatened them with failure or expulsion after boycotting the exams.

The Euro-Med Monitor considered the arrest of the three professors as an illegal move which constitutes a violation of the freedom of expression, deploring the government's threat against 18,000 students to fail or expel them because of their protest.

The Euro-Med Monitor stressed that the Moroccan government should commit to freedom of opinion and expression and work to find serious and reasonable solutions aimed at strengthening public universities against the privatization of medical studies.

The Euro-Med Monitor called the Moroccan authorities to bring back the three academics to work without conditions, especially that the decision to arrest them violates the most basic rights guaranteed by the Moroccan Constitution and international conventions. The Moroccan Constitution affirmed the right to peaceful assembly and to express opinions and organize peaceful protests aimed at changing or stopping any decision that would affect any of the rights guaranteed by law. The Euro-Med Monitor called the concerned ministries to revoke their recent decisions regarding the faculties of medicine, especially as these decisions deprive thousands of students from completing their education.

Mohamed Imad, the Euro-Med Monitor’s legal researcher said that the second section of the Moroccan Constitution, especially articles 19 to 41, guaranteed the right of peaceful demonstration and expression of opinion without restriction or prosecution, stressing that these articles ensured the protection of academic freedoms, scientific, educational, artistic and literary expression. The Ministry of Education violated these articles when it decided to suspend and refer the three academics to investigation.

Imad showed that the protests organized by students inside Morocco and the accompanying support by academics and jurists does not require the use of violence, or the issuance of arbitrary decisions that violate the rights of students to continue their education without privatization or prevention, noting that students should be given enough space to express their opinions and achieve their legitimate demands.

The Euro-Med Monitor called the Moroccan authorities to instruct the ministries of Interior, Education and Health to respect the rights of students and workers in the educational sector and to enable them to exercise them without any repercussions that might threaten the completion of their educational career, or hinder the work of academics who use their legal rights to express their opinions regarding community issues.