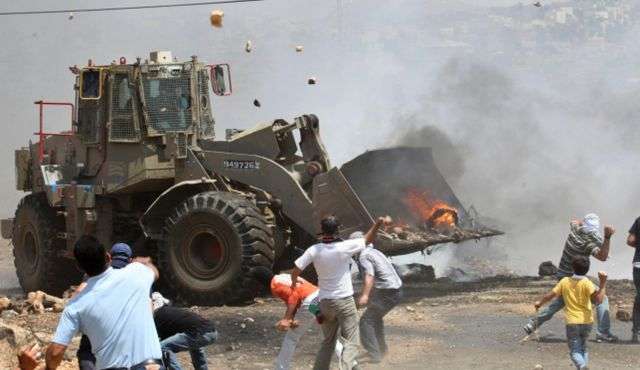 The report charges that Israeli authorities were prolonging the humanitarian crisis in the Gaza Strip with the continued implementation of blockade. The report also criticizes Israel for restricting the movement of Palestinians in the West Bank.

The construction of the security fence/wall is also mentioned as a source of grievance as it is mostly constructed on Palestinian land and in many cases serves to annex land to settlements in breach of international law.

The report states that Israel has engaged in the demolition of Palestinian homes and other facilities in the West Bank, as well is inside Israel itself where homes of Palestinian citizens are destroyed in "unrecognized” villages in the Negev desert.

According to the report Israel often fails to bring Israelis that attack Palestinians to justice. Amnesty says three Palestinians were killed by settlers during the past year.

The report goes on to criticize Israel's policy regarding the imprisonment of Palestinians. Thousands of Palestinians are held in Israeli prisons with more than 307 being administrative detainees held without charge or trial; others received prison terms following military trials. Israel held more than 4,200 Palestinian prisoners at the end of 2011. The report cites reports of torture and other ill-treatment of detainees.

Elsewhere in the world, the report, which surveyed the state of human rights in 155 countries, said there was a "compelling case" for the situation in Syria to be referred to the International Criminal Court for investigations of crimes against humanity.

It documents specific restrictions on free speech in at least 91 of the countries, and says that torture and ill treatment continues in at least 101 countries around the world.

Amnesty singled out Azerbaijan, the country hosting the Eurovision song contest, for particular criticism, calling for the release of 16 prisoners of conscience who were behind bars "for raising their voices" in 2011.

There was also "no sign of significant change" in countries such as Turkmenistan and Uzbekistan, said the Amnesty report.

In sub-Saharan Africa, where the protests movements of the Arab Spring had "resonated strongly" with people, "excessive force" was used against protestors in countries from Angola to Senegal and Uganda.

Social protest gathered strength in the Americas, where demonstrators had clashed with "powerful economic and political interests."

Activists were threatened and killed in countries including Brazil, Colombia and Mexico, said the Amnesty report.

In 2011, China was among countries which "threw the full weight of their security apparatus into the suffocation of protest," stated the report.

Fearful of a protest movement inspired by events in the Middle East and North Africa, authorities in China unleashed one of the harshest crackdowns since the 1989 Tiananmen Square demonstrations, Amnesty said.