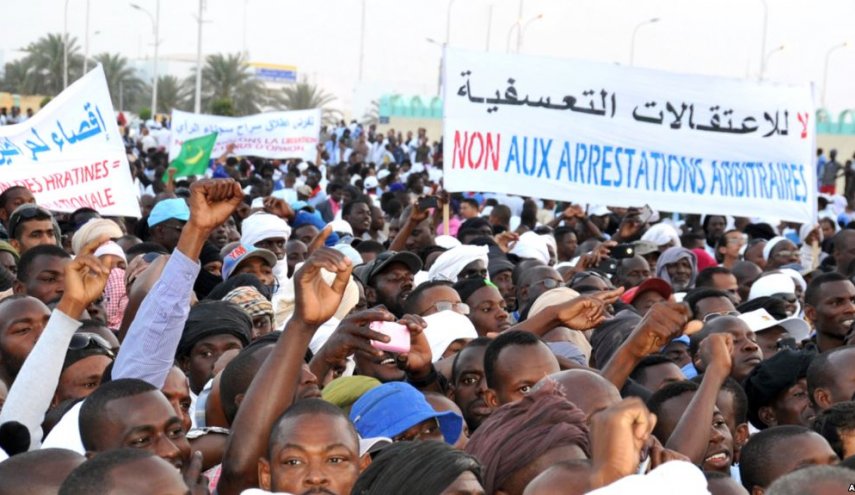 Geneva - Arbitrary detentions, torture, and continued crushing of thousands of civilians in addition to imposing tightened measures on media and targeting opposition would undermine the emerging democracy in the Islamic Republic of Mauritania, the Euro-Mediterranean Human Rights Monitor said in a brief report today.

The report examined several cases of abuse including blocking media content, arresting journalists and activists, repressing female prisoners and many other practices of ill-treatment of Mauritanian citizens.

"The new Mauritanian president must put an end to violations practiced by the former regime and to commit to reforms and take necessary measures to protect the human rights of all Mauritanians," said Nada Nabil, Euro-Med Monitor's media officer.

The official Mauritanian channel, TV de Mauritanie(Mauritania TV) recorded a program last week with the Mauritanian lawyer Mohamed al-Mami Oeld Moulay on the "legal status of the Arabic language". However, the channel did not broadcast the program on its screen as agreed.

"Mauritania TV administration confiscated the program, and re-broadcasted an old program instead," Oeld Moulay said in a tweet. He added that they "did not provide any justifications or explanations; it seems that it is only instructions [from the authorities]."

The Mauritanian activist questioned: "What worries them [the Mauritanian authorities] about this program? Is the era of monitoring, silencing, and confiscation [of media content] is back?!"

This tightening measures on media comes within a series of abuses that occurred since Mohamed Ould Ghazouani was elected as the president of Mauritanian on August 2.

Ould Ghazouani, the 10th president in Mauritania, is the fourth to reach power through elections which is the first peaceful exchange of power between two elected presidents in Mauritania.

President Mohamed Ould Abdel Aziz, who took power after a coup in 2008 and who won the 2009 and 2014 elections, publicly supported Ould Ghazouani's candidacy, who served as the former Defense Minister.

On July 3, Mauritanian security forces arrested journalist Ahmedou Ould Wadia while with his family, where his whereabouts were revealed only a week later.

Ould Wadia is part of the Tawasol opposition party, whose candidate, Sidi Mohamed Ould Boubacar, came the third in the last presidential elections. Ould Wadia's lawyer said the prosecutor questioned him on July 11 and ordered that he remains in detention without being charged without giving any explanation.

Ould Wadia's brother, Mustafa, said that security did not allow him to be alone with his brother during his visit in prison.

Ould Wadia was released without being charged on July 15. According to local human rights institutions at that time, authorities released other detainees associated with protests against the elections. But, others are still in detention on charges including participating in unauthorized demonstrations, damaging public property, and destabilizing civil peace and stability.

Mauritanian security arrested Ould Wadia's colleague, Sidi Camara, in the same way, but released him after only days of detention without a charge.

After his release, Camara said in a press conference in Nouakchott that a number of security officers, wearing civilian clothes, arrested him from his home in Nouakchott on June 26. He added that they confiscated his passport, other documents, computers, and mobile phones.

He said he was detained at a counter-terrorism facility, while he was mainly interrogated about his activities and contacts as a journalist before being released a week later without being charged.

The Euro-Med Monitor described the arrests targeting journalists and bloggers and restrictions on freedom of press as a major setback for freedoms in the country.

"The new president must demonstrate that the Mauritanian authorities will not repeat the repressive practices used in the past to silence dissents and that they will act in accordance with law and constitution and ensure the improvement of the human rights situation of all Mauritanians," Mohammed Imad, Euro-Med Monitor's legal researcher stressed.

Imad noted that President Ghazouani is required to repeal all laws that criminalize freedom of expression and should preserve the right of peaceful assembly and guarantee freedom of media. Additionally, the President must urge the Mauritanian authorities not to target opposition media outlets and figures.

Mauritanian authorities arrested at least three pro-opposition public figures for at a week without a charge in an effort to stifle dissent in the wake of the June 22 presidential elections.

At the time, Interior Minister, Ahmedou Ould-Abdallah, announced on June 25 that the authorities had arrested about 100 people alleging that they were foreigners associated with opposition candidates seeking to destabilize the country.

Mauritanian authorities cut down Internet services in the period between June 25 and July 3, imitating the practices of other dictatorships in Egypt, Tunisia, Libya, Yemen, Syria, and Sudan.

Mauritanians rely heavily on the internet and social media, which is the main source of information enabling them to be aware of the events in the country, at the time the authorities control the official media and impose restrictions on the opposition’s media.

Dozens of Mauritanian imprisoned women announced a several-day-long hunger strike, in the last third of the last month, after feeling tired of the ill-treatment practices in order to make their voices heard, even if from behind the bars.

According to a source from the National Human Rights Commission in Mauritania, a guard slapped a female prisoner, while another prisoner is gravely ill and her condition has became terrible inside the prison.

The demands of the female prisoners include bringing women to run the prison instead of men, as the internal law governing prisons in Mauritania stipulates that only women should run women's prisons.

The National Human Rights Commission in Mauritania said that women suffer extortion inside the prison, and are subject to ill-treatment practices by the prisons’ administrators.

The Euro-Med Monitor pointed out that one of the most major problems faced by women prisoners is the absence of any rehabilitation program that can help them integrate into social life normally after their release, although the prison administration has a special budget for the prisoners' rehabilitation.

There is only one prison for women in Mauritania, located in the province of Arafat in southern Nouakchott, placed in what used to be a center for orphans’ rehabilitation. The number of the prison's inmates is between 40 and 90, according to the President of the Truth and Justice Organization, Ahmed Ould Mohamed.

Ould Mohamed says that the problem of women prisoners is still ongoing, and their hunger strike is an important step to force change. He also expected it will have many repercussions on them in the future.