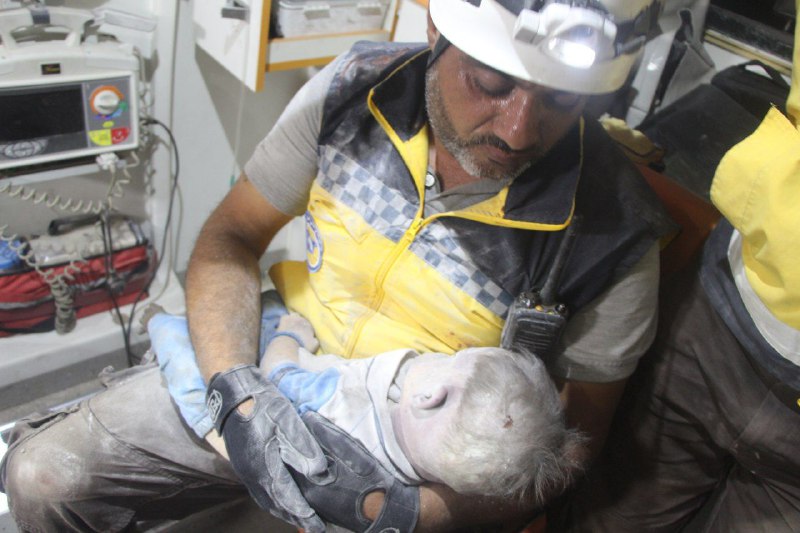 Euro-Med and Syrian Network: Those targeting civilians in Ma'aret al-Nu'man should be prosecuted

Geneva – The Syrian government forces' attack targeting civilian homes in Ma'aret al-Nu'man city in Idlib governorate, northwestern Syria, which resulted in the death of a number of women and children, flagrantly violates international law, the Euro-Mediterranean Human Rights Monitor and the Syrian Network for Human Rights said in a statement on Friday.

The bombing caused massive destruction in the city in addition to the outbreak of fires, which increased the number of casualties, and hindered the work of medical crews.

The Syrian government’s forces and the Russian army have launched a full-scale attack on Idlib, since 26 April which endangered civilians. Hence, the recent attack on Maarat al-Nu'man sheds the light on the violations and abuses that civilians in Idlib are subjected to.

Despite the Idlib demilitarization agreement signed  on September 17, 2018 to establish a "buffer zone", military attacks by Syrian government forces targeting civilians, medical facilities, and markets have not stopped. The death-toll of these attacks, since the beginning of the military escalation, reached 998 civilians, including 271 children and 173 women.

Idlib, home to some three million people, is the last major area under ​​the control of the Syrian opposition groups.

According to the United Nations, the latest escalation has forced more than 550,000 people to flee their areas. As a result, some areas in the southern countryside of Idlib have become completely empty.

Forcibly displaced citizens from Idlib face many difficulties such as securing housing, due to their high rents or unavailability in the border areas, and providing water for drink and daily use, especially in light of the decline of international relief support, which threatens the spread of many diseases.

The United Nations should pressure the Syrian government and its ally, Russia, to stop these attacks, which flagrantly violate international law and all parties to the conflict should prioritize the protection of civilians.

Any indiscriminate attack, that could cause civilian deaths or injuries or that is launched with a previous knowledge it could cause accidental civilian casualties, and committed with a criminal intent, could amount to a war crime.

"Although attacking civilian buildings such as houses, hospitals and schools cannot be justified under any circumstances, the Syrian government continues to bomb and kill civilians in their homes," said Mohammed Imad, a legal researcher at Euro-Med Monitor.

Imad added: "The continued targeting of civilians and health facilities in Idlib and its countryside is a serious violation of the international humanitarian law that may amount to a war crime, according to Article 147 of the Fourth Geneva Convention and it requires to held parties involved accountable."

In addition, Article 25 of the Hague Regulations on the Laws and Customs of Land War of 1907 stipulates: "The attack or bombardment, by whatever means, of towns, villages, dwellings, or buildings which are undefended is prohibited."

The Euro-Mediterranean Human Rights Monitor and the Syrian Network for Human Rights urged the United Nations and the concerned parties to take serious actions to stop the crimes taking place in Idlib, and to accelerate the provision of relief funding to increase the frequency of relief operations in areas witnessing attacks.