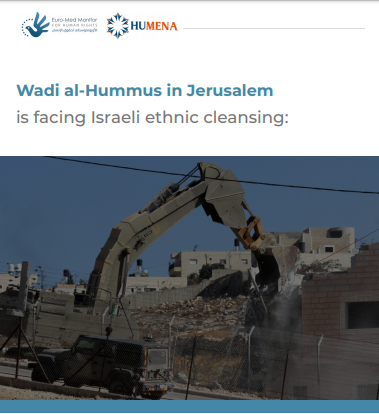 The Israeli authorities have escalated their abuses against Palestinians living in occupied Jerusalem. July 2019 witnessed the largest demolition orders in one day since 1967 that reached 11 buildings with a total of 72 apartments, in a crime that amounts to ethnic cleansing.

In the context of shooting crimes and violations of the right to physical integrity, the Euro-Med Monitor and HUMENA documented during the reporting period the injury of seven Palestinians, including a child, a journalist and an elderly, in five raids involving gunfire and direct assault.

The Israeli forces conducted 43 raids in the towns and neighborhoods of occupied Jerusalem, during which 102 Palestinians were arrested, including 19 children, in addition to three females, one of them is a child, and a journalist.