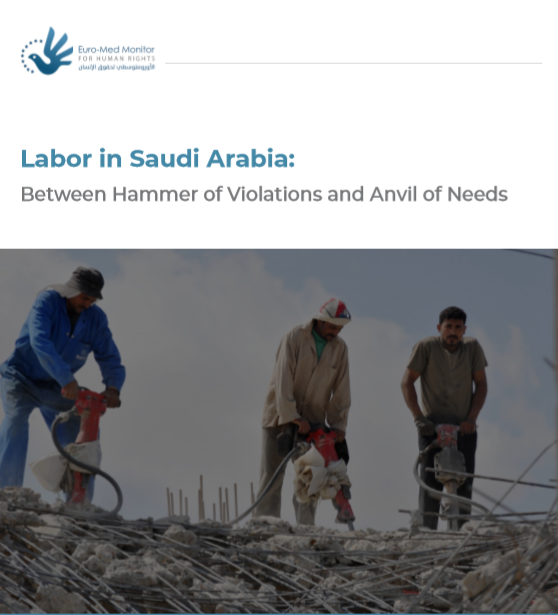 Geneva- The Euro-Mediterranean Human Rights Monitor confirmed today that the recent adoption by the Saudi authorities of a number of resolutions against expatriate workers contributed to the deterioration of the humanitarian, living and human rights situation of these workers, which contradicts with the International Labor Convention.

In a brief report, the Euro-Med Monitor highlighted the situation of foreign workers in Saudi Arabia and the humanitarian and living conditions surrounding them, the abuses they face from employers, and the governing authorities imposing these laws in Saudi Arabia, which represent a serious violation of the rights of workers, especially expatriate workers in contradiction with the Universal Declaration of Human Rights, the International Covenant on Economic and Social Rights and the International Labor Convention, which guarantees the rights of workers.

The report, titled "Labor in Saudi Arabia between hammer of violations and anvil of need" mentioned these practices and violations, which have prompted tens of thousands to leave work and eventually leave the Kingdom. According to figures from the Saudi Authority of Statistics, the number of expatriate workers in the Kingdom has dropped from 12 million in 2017 to 10 million this year.

According to the report, the Saudi decisions - including increasing the value of residence fees for workers and their families, and the policy of forced deportation - contributed to the deterioration of the humanitarian, living and legal situation of these workers.

It pointed out that foreign workers in Saudi Arabia could barely pay residence fees and provide basic services for their families. The Euro-Med Monitor confirmed that the lack of real legal control of the Saudi authorities over the institutions that employ foreign workers has led to an increase in these violations, and made workers vulnerable to influential parties in the Kingdom as well.

The Euro-Med Monitor explained that the deprivation of workers of their salaries for long months and the deliberate slowdown in issuing residency cards to them, threatening them with action from employers to pressure them to yield to their inhuman conditions for fear of expulsion and deportation.

The report examined the conditions of detention and deportation of irregular workers who lost their right to work in the Kingdom for reasons not related to them, but to the slowness of sponsors in renewing their papers and correcting their legal status.

The report documented the detention of hundreds of these foreign workers in detention facilities that are not eligible to receive so many of them without regard to the special circumstances of some workers such as the elderly, children and the sick.

Based on testimonies collected by the Euro-Med Monitor, dozens of detained workers were denied medical care, and the management of these centers separated families from each other, including separating children from their mothers.

Saudi Arabia has three basic regulations and laws that organize foreign labor within the Kingdom which is the Saudi Labor Law, the Residence Law, the Border Security Law, and some royal decrees and orders that set out the mechanisms for bringing foreign workers, how they reside, and the rights and duties they have.

However, the Euro-Med Monitor concluded in its report that the Saudi authorities apply sanctions and penalties against foreign workers - even without violating these rules - without granting them the rights stipulated in those rules, and without regard to the international conventions that guarantee workers' rights to salary, good treatment, non-persecution and the right to have a lawyer.

On the other hand, the Euro-Med Monitor monitored a number of violations against women workers inside the Kingdom, especially those who work as domestic workers in houses, as this sector constitutes the largest percentage of workers in Saudi Arabia.

According to the Geneva-based organization, many workers have been tortured, humiliated and physically assaulted by locals in a violation of the most basic human and legal rules guaranteed by international law and customs.

Mohamed Imad, a legal researcher at the Euro-Med Monitor, said that Saudi practices towards foreign workers violate their most basic human rights guaranteed by international law and customs, including the right to decent life and work in a safe environment without restrictions or prosecution.

He added that the texts of the conventions include beyond any doubt this right, as stipulated in the Universal Declaration of Human Rights and the International Covenant on Economic and Social Rights and the Convention on Labor.

The Euro-Med Monitor stressed that the need to expedite the cessation of violations against expatriate workers, especially the sponsorship system which imposes high fees on workers disproportionate to the wages they receive, calling on the Saudi authorities to activate complaints and impose sanctions on Saudi employers who violate the rights of their foreign workers.