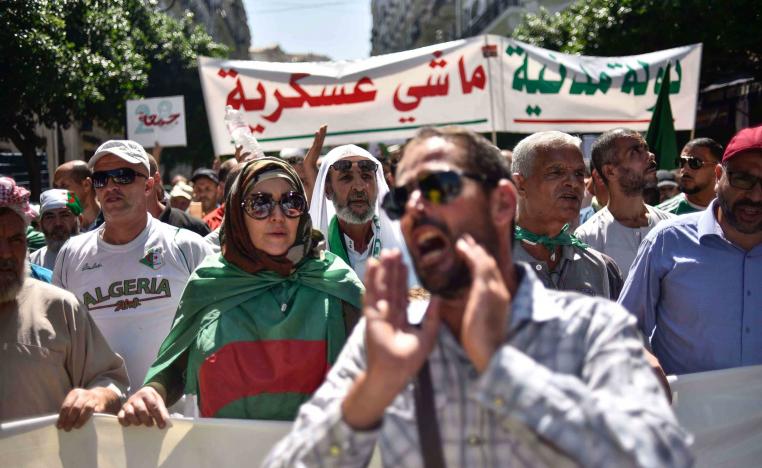 Geneva – The Euro-Mediterranean Human Rights Monitor said in a statement on Saturday 14 September, 2019 that the Algerian authorities have arrested a number of peaceful activists in a blow to freedom of expression in Algeria.

The Euro-Med Monitor said that it documented the arrest of people over holding banners or publicly opposing the authorities’ policies, which came to power after the resignation of former President Abdelaziz Bouteflika on April 2.

Algeria's Army Chief of Staff and Vice Minister of Defense, Ahmed Gaid Salah, is currently the most powerful man in Algeria. On August 26, he rejected the protesters' demands of a transitional period and urged the authorities to organize presidential elections as soon as possible.

The protest movement in Algeria has started since February 22, 2019, refuses to hold elections with the remaining of the current government of Nour Eddine Badawi and President Abdelkader Ben Salah, who were part of the former regime of the 20-year-rule of Bouteflika.

According to reports, two security agents wearing civilian clothes arrested the leader of the Democratic and Social Union, Karim Tabbou, from his home in Douera, in the western suburb of Algiers, on Wednesday’s night.

The Algerian authorities arrested activist Hamza Jou'di, who works as a captain in the navy, and moved him to el-Harrach prison on 24 August.

Jou'di, 30, used to participate in the protests, calling on fellow protesters to engage in civil disobedience starting from the beginning of September.

The Euro-Med Monitor explained that several officials of political parties affiliated with the Bouteflika’s regime are in provisional detention on charges of corruption. Others were jailed for "conspiring against the state and the Army," including Louisa Hanoune, the leader of the left-wing Algerian Workers' Party, and General Ali Ghadiri, a candidate for the presidential election, which was canceled.

The large-scale arrests began on June 21 and still ongoing, targeting anyone holding banners and wanting to join rallies as well as leaders of political parties, in addition to all those who oppose the ruling authority's policies.

The Algerian authorities prevented meetings of political and non-governmental groups, blocked a well-known news site, and expelled veteran journalists, including a reporter of a global news agency, and several foreign journalists from Algerian territories.

Mohammed Imad, a legal researcher at Euro-Med Monitor, said that while large protests continue every Friday, police forces are heavily deployed in the capital's main streets, squares and checkpoints to effectively reduce the number of people who can reach the mass protest and to tightly control the participants. "This is a huge blow to freedom of expression and the right to peaceful assembly," said Imad.

Imad added that it is disturbing that activists and leaders of political parties are arrested and charged only for peacefully expressing their political opinions, in a clear violation of the Algerian constitution and Algeria's international obligations.

The Euro-Mediterranean Human Rights Monitor called on the Algerian authorities to respect the International Covenant on Civil and Political Rights, which Algeria ratified in 1989, and the African Charter on Human and Peoples' Rights when dealing with peaceful protesters holding banner at weekly demonstrations.

Arbitrary arrests and detentions will not help Algeria overcome its political crisis. The governing authorities should listen to the demands of hundreds of thousands of peaceful protesters for a democratic transition to happen that protects all Algerians and preserves their human dignity, the Euro-Med Monitor affirmed.