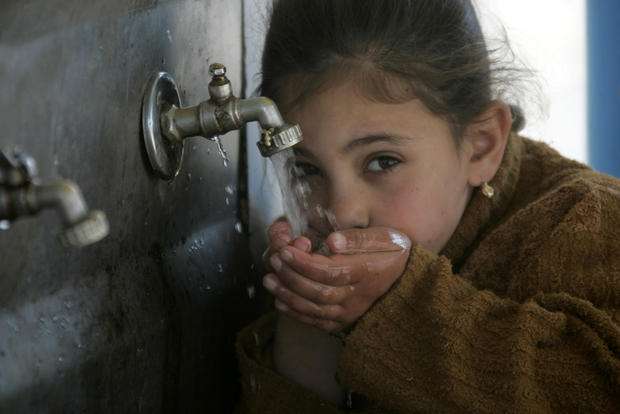 Gaza's only fresh source of water is too dangerous to drink because of contamination by fertiliser and human waste, a new report says.

The charities Save the Children and Medical Aid for Palestinians say the number of children being treated for diarrhoea has doubled in five years.

They say Israel's five-year blockade of the territory is preventing crucial sanitation equipment from getting in.
The blockade must be lifted "in its entirety", they say.

The report, Gaza's Children: Falling Behind, says that high levels of nitrates and other contaminants have been found in the main water supply.

Nitrates, found in faeces and fertiliser, are linked to the doubling of the incidence of watery diarrhoea in children since the blockade began, it says.

As well as the blockade, it blames war damage and chronic underinvestment.

Desperate families are turning to private water sources - without realising that this water too is contaminated, often at 10 times the safe level, the report says.

Israel insists that the blockade of Gaza has been eased considerably in recent months, says the BBC's Wyre Davies in Jerusalem.

It says more supplies and building materials to help reconstruction of the territory's battered infrastructure are being allowed in.

But the report says this is not enough.

"As a matter of urgent priority for the health and well-being of Gaza's children, Israel must lift the blockade in its entirety to enable the free movement of people and goods in and out of Gaza," it says.

It also calls on the international community, the Palestinian Authority and aid donors to do more.