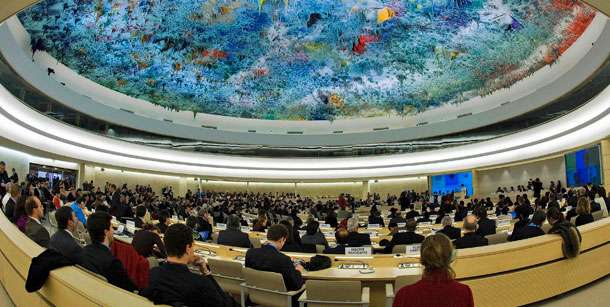 Yesterday afternoon, the Human Rights Council held general debates under its agenda items on the human rights situation in Palestine and other occupied Arab territories and on the follow-up to and implementation of the Vienna Declaration and Programme of Action.

Opening the general debate on the human rights situation in Palestine and other occupied Arab territories, Kyung-wha Kang, Deputy High Commissioner for Human Rights, presented the High Commissioner’s report that contained information received from Turkey concerning the implementation of the fact-finding mission’s conclusions on the incident of the humanitarian flotilla; the progress report of the High Commissioner on the implementation of Human Rights Council resolution 19/18 entitled "Follow-up to the report of the United Nations Fact-Finding Mission on the Gaza Conflict"; and the Secretary-General’s report relating to Council resolution 19/17 concerning Israeli settlements in the occupied Palestinian territory and the occupied Syrian Golan.

Palestine, speaking as a concerned country, called on the Council to bring pressure on Israel to comply with international law and to put an end to its occupation and the continued attacks on Palestinian citizens, property and infrastructure. Efforts should be made to put an end to the attacks of Israeli settlers against Palestinians
Turkey, speaking as a concerned country, said more than two years had passed and Israel had taken no effective steps to redress the humanitarian flotilla incident of May 2010. On the contrary, it had chosen to enhance its reputation of non-compliance, and felt free to use disproportionate force whenever and wherever.

Syria, speaking as a concerned country, said that the Israeli forces continued their violations in a systematic and persistent manner. The Council and the Office of the High Commissioner must not remain silent before such practices and should not be put under pressure by the State committing State terrorism.

In the general debate, numerous delegations deplored Israel’s non-cooperation with the Special Rapporteur and non-compliance with standards of international law, international human rights law, and international humanitarian law in the occupied Palestinian territories and the occupied Syrian Golan. Delegations were concerned by increased settler violence; the decision to expand settlements which was seen as a major obstacle to peace; and measures aimed at altering the legal, geographic and demographic character or status of Jerusalem. Other issues raised were administrative detention of Palestinians by Israel, ill-treatment and torture. The Council was urged to take action and pressure Israel to abide by its obligations and comply with all resolutions. Concern was also expressed with regards to the human rights situation in the occupied Syrian Golan.

The Council also started its general debate on the follow-up to and implementation of the Vienna Declaration and Programme of Action.

In the general debate, speakers recognized the impact of the current economic and financial crises on the enjoyment of economic, social and cultural rights, including the right to development. One speaker said that the economic crises should not be used as an excuse to deprive migrants of the enjoyment of their rights. There were valuable best practices on addressing the issue of impunity with regards to the protection of human rights defenders and there was a need to ensure more cooperation at the international level in this area. The Vienna Declaration and Programme of Action were commended on several levels, including the shift that occurred from a standard-setting process to action focused on implementation of rights at the country and local level. The question of the need to address sexual violence was also raised, with particular concern regarding sexual violence against women in conflict and post-conflict situations.