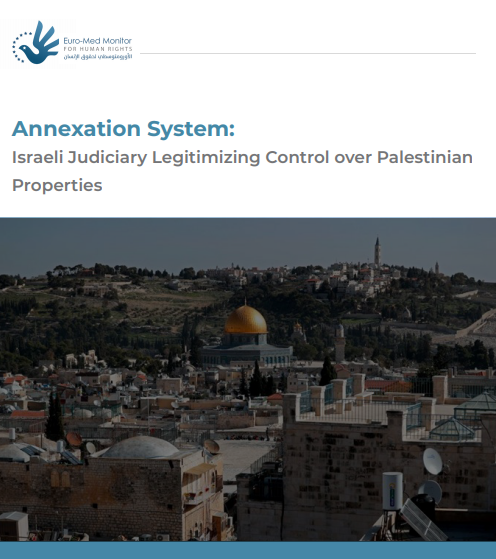 During September, the Israeli forces carried out eight demolitions and distributed notices to Palestinian homes and properties in Jerusalem, which resulted in the demolition of five houses, two of which were destroyed by their owners to avoid paying heavy fines, a house and a commercial facility. In addition, four horse stables were destroyed as well as distributing more demolition notifications to new homes and facilities, the report said.

The report noted to the complicity of the Israeli judiciary at the political level, after a court issued a decision to evacuate a Jerusalemite family from its home made of four apartments and inhabited 13 people in Silwan’s Wadi Hilweh neighbourhood, south of Al-Aqsa Mosque within 90 days. This aims to promote the policy of forced displacement of Palestinians and turning Palestinian lands into settlements to change the demographic character of the city.

The report monitored 12 shootings and direct assaults carried out by the Israeli forces in the neighborhoods of Jerusalem, which resulted in the killing a Palestinian, Maryam Kaabneh, 50, and injuring 29 others, including two paramedics and a child. The Euro-Med Monitor confirmed that Kaabneh was field executed, on the pretext of trying to carry out a stabbing attack at the Qalandiya checkpoint, although she did not pose any threat to the lives of soldiers. In addition, the alleged attempt was not proved by independent bodies.

The report documented the Israeli forces' incursions into the towns and neighborhoods of Jerusalem, amounting to 77 raids, including the arrest of 110 Jerusalemites, such as the Minister of Jerusalem and 22 other children, four women, and summoned 14 people, including five women, children and four guards of the Al-Aqsa Mosque and the governor of Jerusalem. Ten others in Jerusalem were fined and placed under house arrest.

According to the report, Al-Aqsa Mosque was targeted during this Israeli escalation, and the Israeli forces closed its gates and prevented prayers there on September 26, 2019, under the pretext of arresting a child who attempted to carry out a stabbing attack.

The report pointed out that the Israeli authorities continue to impose restrictions on the access of Muslim worshipers to the Mosque, obstructing its reconstruction, while facilitating the storming of settlers and seeking to impose a new fait accompli.

The report noted that settlers storm the Mosque throughout 22 days a month in September, meaning all days except Fridays and Saturdays. Some 2,190 settlers participated in the incursions into the yards of the Al-Aqsa Mosque, accompanied by high-security from the Israeli police and special forces, accompanied by attacks on worshipers at its yards, in attempt to perform Jewish religious rituals.

The report said that the Israeli authorities issued during the month of September 16 removal orders from the Al-Aqsa Mosque, including six women.

Anas Aljerjawi, the Director of MENA at the Euro-Med Monitor, said the Israeli settlement plans reflect an official policy of mass displacement of Palestinians and replacing them by Israeli settlers in mass evictions which are contrary to international law.

He added that Israel is proceeding ahead with a major plan to demolish thousands of Palestinian homes in Jerusalem, and the seizure of more Palestinian land in its project to Judaize the city and change its demographic character. This requires a formal action by the Palestinian Authority and the international community to counter these plans, which amounts to ethnic cleansing.

The Euro-Med Monitor called on the Israeli authorities to stop the racial discrimination policy against Palestinians when it comes to investigation, prosecution and trial, and to cease the policy of demolishing Palestinian properties and displacement and respect their right to worship and practicing religious rituals.

The Euro-Med Monitor called on the United Nations to adopt a new policy to hold Israel accountable for its violations against the Palestinian population of Jerusalem, and to assume responsibility of protecting them as inhabitants of an occupied area under the Security Council and the General Assembly’s resolutions, putting Jerusalem under international protection, in accordance with UN General Assembly Resolution 181.