Euro-Med Monitor : Iraqi Journalists and bloggers targeted and harassed over coverage of protests against corruption 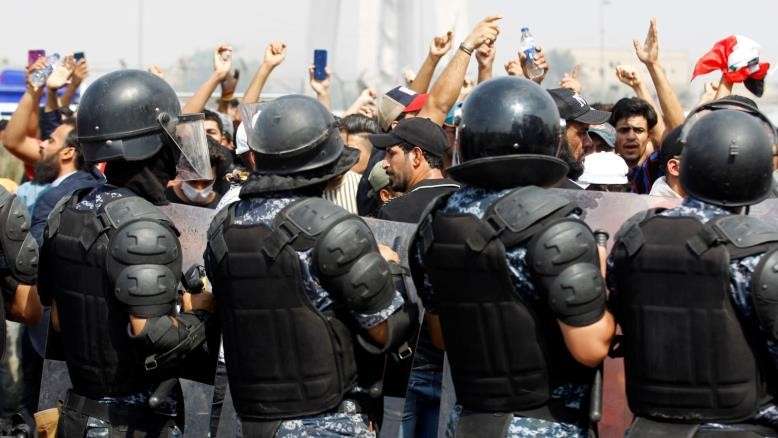 Geneva - The Euro-Mediterranean Human Rights Monitor expressed its deep concern over the increasing violations and threats against Iraqi journalists and bloggers over their coverage of protests that have swept Baghdad and the southern provinces of the country since early October.

The Geneva-based group documented in testimonies by Iraqi journalists and bloggers in which they revealed that they are being harassed, while others who were haunted by unidentified masked motorcyclists after protests eased in the southern province of Diwaniya.

The organization said that journalist Zaid al-Fatlawi, a reporter for a local Iraqi channel, reported that he and other colleagues were prevented from filming several times, and despite obtaining security approval in advance, they were subjected to harassment while heading to the Demonstrations Square in the central Diwaniya province.

On October 5, according to al-Fatlawi, the Iraqi Special Forces beat him and his colleagues, prevented them from covering the protests, confiscated equipment and tried to kidnap and force them to get into a police car near the Demonstrations Square.

According to the Human Rights Commission and the Iraqi Police, the number of victims of protests across Iraq between 1-8 October this year amounted to 112 people, while the number of wounded people reached 6,107, including more than a 1,000 police and security officers.

The Iraqi blogger Ahmed al-Shaibani reported that on the seventh of this month he and his colleagues were followed by unidentified masked men on motorcycles, explaining that he informed the Office of the Human Rights Commission in Diwaniyah of what happened.

According to the testimony of Al-Fatlawi and Al-Shibani, the security officers have directed charges against them, including incitement against the government, spying for foreign parties and working for foreign intelligence agencies and international embassies.

Omar Abdullah, a researcher at the Euro-Med Monitor, said that targeting journalists and bloggers by members of the Iraqi security is a serious violation of international conventions that guarantee freedom of press and the transfer of information, including Article 19 of the Universal Declaration of Human Rights and the International Covenant on Civil and Political Rights, which stressed the right to freedom of expression including the freedom to seek, receive and impart information and ideas of all kinds in any form and by any means of their choice, without restrictions.

Abdullah added that the Iraqi security services should abide by the rule of law, and work to provide protection for journalists instead of prosecuting and threatening them, referring to the text of Article 38 of the Iraqi Constitution, which guarantees freedom of expression by all means including freedom of the press, printing and advertising, without restrictions whatsoever.

The Euro-Med  Monitor researcher stressed that the Iraqi government should enable journalists and media professionals to conduct their media work freely and give them enough space to publish and follow the news, without restrictions or prosecution, calling on the Iraqi government to immediately release all journalists arrested for their work as well as political activists. He affirmed that these practices constitute a serious and a clear violation of international laws and conventions which guarantee the right to freedom of opinion, expression and peaceful assembly in addition to the right to transmit, publish and broadcast any information and news.

Earlier this year, Reporters Without Borders published a report revealing that Iraq ranks 156 out of 180 in the World Press Freedom Index.

That Euro-Med Monitor stated that the absence of legal legislations guaranteeing freedom of the press, and the persistence of old laws is a real obstacle to the Iraqi press development and that Iraqi legislators rarely attempt to abolish penalties over publishing news.

The organization pointed out that Iraq did not even abide by international conventions that it signed. Article 38 of the Iraqi Constitution and Iraq’s obligations requires the Iraqi government to oblige by respecting freedom of the press, however, there are still Iraqi laws in effect that prove otherwise.

The Euro-Med Monitor concluded in its statement that despite the decline in violence committed by armed groups against journalists, press crews are gradually facing obstacles of a new type that prevent them from carrying out their professional duty. Most notably, the organization noted, is the arrests and attacks carried out by the Iraqi forces against journalists and bloggers following the outbreak of popular protests against what demonstrators describe as widespread corruption in Iraq.