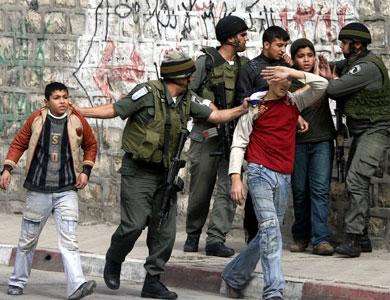 The UN Special Committee on Israeli Practices in the Occupied Territories expressed serious concern about the treatment of Palestinian children in detention by Israeli security forces, and warned that a pattern of detaining and mistreating children “links to broader, longstanding concerns regarding Israel detention of Palestinians generally.”

“Witnesses informed the Committee that mistreatment of Palestinian children starts from the moment of detention,” said Ambassador Palitha T.B. Kohona, Permanent Representative of Sri Lanka to the UN in New York, and Chairperson of the Committee, at the end of a fact-finding visit to Amman, Cairo and the Gaza Strip.

“Large numbers are routinely detained. Children’s homes are surrounded by Israeli soldiers late at night, sound grenades are fired into the houses, doors are broken down, live shots are often fired; no warrant is presented,” he noted. “Children are tightly bound, blindfolded and forced into the backs of military vehicles.”

Ambassador Kohona explained that parents are not allowed to accompany the detainees, and that family members are insulted, intimidated and at times physically assaulted. According to witnesses, the detention and transfer of children can last for hours, and can often include stops in Israeli settlements, Israeli checkpoints and police or military bases.

“Children are not informed of their rights, including their right to legal representation and to not incriminate themselves,” he warned. In 63% of cases involving Palestinian children, according to testimony received, Israeli officials attempt to pressure them into becoming informants. “The Committee’s view is that this is an unacceptable practice, one that Israel must end immediately.”

“Reports of the interrogation of Palestinian children are of utmost concern to the Committee, as well as conditions of detention generally,” Ambassador Kohona stressed. “Palestinian children in detention are often denied family visits, denied access to legal representation, held in cells with adults, denied access to education, and -even at the age of 12- tried in Israeli military courts.”

“We were dismayed to hear that Israel continues its practice of sentencing children to prison, or to house arrest in homes other than their own families, in effect exiling them from their families,” he said. The Committee was informed by witnesses that there were 192 children in detention, 39 were under the age of 16.

In its preliminary observations, the UN Special Committee drew attention to two further areas of immediate concern in the West bank, including East Jerusalem: the Israeli practice of demolishing Palestinian homes, and violence by Israeli settlers against Palestinians. The experts also assessed the economic impact of the Israeli blockade on the Gaza Strip.

“These Israeli practices lead the Special Committee to one over-arching and deeply troubling conclusion,” Ambassador Kohona underscored. “The mass imprisonment of Palestinians; the routine demolition of homes and the displacement of Palestinians; the widespread violence by Israeli settlers against Palestinians; and the blockade and resultant reliance on illegal smuggling to survive; these practices amount to a strategy to either force the Palestinian people off their land or so severely marginalize them as to establish and maintain a system of permanent oppression.”

The Special Committee will present a mission report to the UN General Assembly next November, with its observations and recommendations to improve the human rights situation for those whose lives are affected by occupation.

The UN Special Committee to Investigate Israeli Practices Affecting the Human Rights of the Palestinian People and Other Arabs of the Occupied Territories was established by the UN General Assembly in December 1968 to examine the human rights situation in the occupied Syrian Arab Golan, the West Bank -including East Jerusalem - and the Gaza Strip.

Source: Office of the High Commissioner for Human Rights