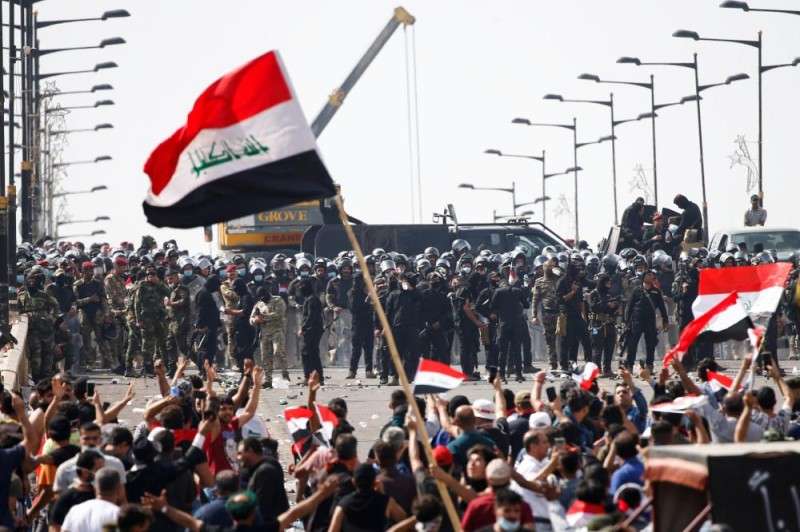 Geneva – The Euro-Mediterranean Human Rights Monitor said that the continuation of the European Union's implementation of the Partnership and Cooperation Agreement with Iraq in the light of the security services' continued use of lethal force against the escalating protests does not serve the goals and values of promoting human rights principles and spreading democracy in the war-torn country.

The Euro-Med Monitor had made a series of contacts and sent urgent letters to members of the European Parliament, including the European Parliamentary Relations Committee, and the Subcommittee on Human Rights in the Parliament to inform them of the suppression of demonstrations in the country, calling on the EU to suspend its partnership agreement with Iraq.

The Euro-Med Monitor questioned the feasibility of continuing the implementation of the agreement with the government of Prime Minister Adel Abdul Mahdi, which continues to launch systematic and bloody campaigns against popular protests calling for overthrowing the government for failing to address corruption and addressing electricity cuts and unemployment.

The European Commission announced earlier that the agreement focuses on common interests of the EU and Iraq such as democracy and human rights, economic, migration, security, energy, environmental affairs.

Since the start of the second wave of anti-government protests last Friday, at least 74 Iraqis have been killed and hundreds of others have been injured, raising the total death toll in October to 231.

The Euro-Med  Monitor warned of the danger of targeting thousands of Iraqi protesters in Tahrir Square in central Baghdad for the fourth day in a row by the security services pointing out that the security solution will not contribute to putting down the protests, but it would only increase tension.

Despite the Iraqi Interior Ministry's announcement that its forces had faced protests with gas and rubber bullets, the protesters affirmed snipers fired live bullets to disperse the protests.

The Euro-Med Monitor documented that on the fifth of October snipers targeted protesters and caused deaths, while others were seriously injured in three locations in Baghdad and in the southern Iraqi governorates during the first wave of protests, which lasted for eight days.

The use of lethal force against protesters and the arrest of hundreds of them violates the international and Iraqi laws. The UN Code of Conduct stipulates that law enforcement officials exercising powers should protect all people from harm.

The Code of Conduct stipulates that the officials should respect and protect human dignity and preserve the human rights of all persons during the performance of their duties.

The Euro-Med Monitor stressed the need for the Iraqi government to enable citizens, media and political activists to bear their responsibilities so that people could express their opinions freely by giving them enough space to publish and share news and updates, without restriction or prosecution.

The Euro-Med Monitor called on the Iraqi government to immediately release all citizens and activists who were arrested over participating in the protests, stressing that their continued detention constitutes a serious and a clear violation of international laws and conventions, which guarantee the right to freedom of opinion, expression, and peaceful assembly.

“The failure of the Ministry of Health, hospitals and health departments in Baghdad and a number of Iraqi provinces to issue official statistics of the number of deaths and injuries is a violation of the Iraqi Human Rights Commission Law No. 53 of 2008," Omar Abdullah, a researcher at Euro-Med Monitor said.

Abdullah added that the Iraqi authorities should adhere to the UN Basic Principles on the Use of Force and Firearms by Law Enforcement Officials, which provide for the use of non-violent means by security forces as far as possible before resorting to force.

The Euro-Mediterranean Human Rights Monitor called on the Iraqi authorities to initiate an immediate and impartial investigation into the use of lethal force in dispersing the protesters, and to investigate allegations that security forces did not allow medical staff to provide services to the injured, and to ensure that all the wounded receive immediate care without obstacles.

The Euro-Med Monitor urged the EU to suspend the Partnership and Cooperation Agreement until Adel Abdul Mahdi's government brings members of the Iraqi security forces, including commanders responsible for the use of excessive lethal force to court, and to stop using any form of violence against demonstrators. The Euro-Med Monitor called on the Iraqi authorities to take concrete actions to affirm its commitment to freedom of opinion and peaceful assembly in the country.