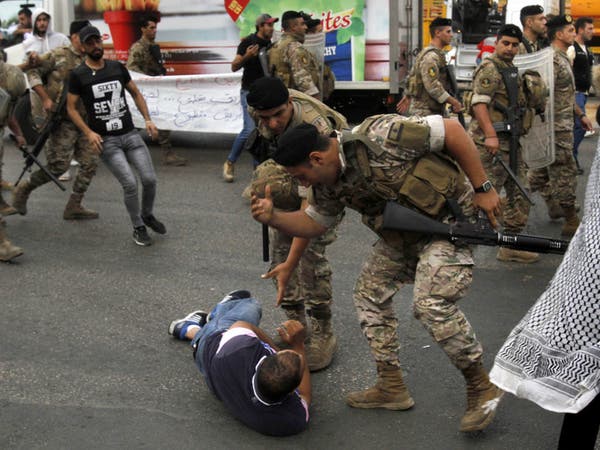 Geneva - The Euro-Mediterranean Human Rights Monitor said on Friday, 15 November 2019 that the Lebanese authorities should take all possible measures to ensure the protection of peaceful protesters, respect their right to freedom of assembly instead of arresting and abusing them. The Lebanese authorities have forcibly hidden some protesters, threatened media workers and sabotaged their equipment.

In a statement, the Geneva-based group expressed a grave concern at the continued attempts by the Lebanese security forces and the army to forcefully disperse peaceful anti-government gatherings in a clear violation of Article 13 of the Lebanese Constitution.

The Euro-Med Monitor said, “although the army has generally ensured the right of peaceful protesters to protest across the country since the beginning of the protests on 18 October, some officers have resorted in recent days to excessive violence to disperse protesters in several areas and arrested a number of activists in Jal El Dib, Zouk and various areas in Lebanon.

According to Lebanese activists who posted on social media, Raymond Takla, Joseph Saab, Ralph Khawand, Julian Rouhana, Joseph Rouhana, Mario Bou Ghosn and Anthony Mhanna were all arrested by the Lebanese intelligence service in the Jebel Dib area. In addition, Samer Mazeh and Ali Basal were arrested at the Ring Bridge in Beirut.

The Euro-Med Monitor referred to the arrest and torture of Lebanese demonstrator Salim Ghadban on November 1, from the sit-in of the Association of Banks after a verbal dispute between him and two members of the Internal Security Forces. He was severely beaten and taken to the military hospital and discharged the next day under pressure from angry protesters. The organization also referred to the brutal assault on Khadr Shehab on 13 November by gendarmes while selling water to protesters in the northern city of Tripoli.

Earlier, the Lebanese army said it had opened an investigation with a soldier who opened fire while dispersing protesters trying to block a road in Khalde, south of Beirut, killing one protester on the evening of November 12.

Anas Aljerjawi, head of the Middle East and North Africa at the Euro-Med Monitor, said that the security forces and the military should work to protect Lebanese protesters, not allow them to be attacked by factional groups, and release detainees unless they are convicted of any infractions.

AlJerjawi urged the Lebanese authorities to open an investigation into the abuses against protesters over the past two days, including the assault on activist Khaldoun Jaber in front of the Presidential Palace in Baabda while exercising his right to peaceful assembly on Wednesday evening, November 13, where he was severely beaten and tortured by an intelligence officer, before being released shortly after his arrest.

The Euro-Med Monitor noted that political elites continue to anger and provoke protestors’ feelings, working relentlessly to drive them out of the streets and squares by force, even though their demands are just and fair, while calling on the security authorities to immediately disclose the whereabouts of activists and respect their right to medical care and communicate with lawyers.

The Euro-Med Monitor saw footage on social media of clashes in the predominantly Christian area of Jal el Dib near Beirut. The protesters attacked people belonging to parties in the government, protesting the protesters' closure of roads, as the army moved to open roads, assaulted protesters and arrested some of them.

The Euro-Med Monitor criticized the negative attitude of the Lebanese Armed Forces in dealing with party groups that attack the demonstrators, calling on the leadership of the army to protect the demonstrators and to not allow anyone to abuse them, and violate their right to peaceful assembly.

Three Lebanese photographers reported that they received direct threats from members of the army to break their cameras and press equipment if they documented the process of dispersing the protesters.

The Euro-Med Monitor affirmed that any attack against the protesters from the security forces or individuals belonging to the ruling parties is a clear violation of the Lebanese Constitution and Lebanon's international obligations, especially Article 21 of the International Covenant on Civil and Political Rights, which Lebanon ratified in 1972.

The Geneva-based group stressed that the United Nations Basic Principles on the Use of Force and Firearms provided that law enforcement officials could use force only if other means were ineffective or it is not clear that they would achieve the desired result.

The Euro-Med Monitor called on the Lebanese authorities and the army to take all possible measures to ensure the protection of peaceful protesters, respect their right to freedom of assembly, release detainees unless convicted of any wrongdoing, immediately disclose the fate of the forcibly disappeared, and enable their families and lawyers to visit and learn about their condition.