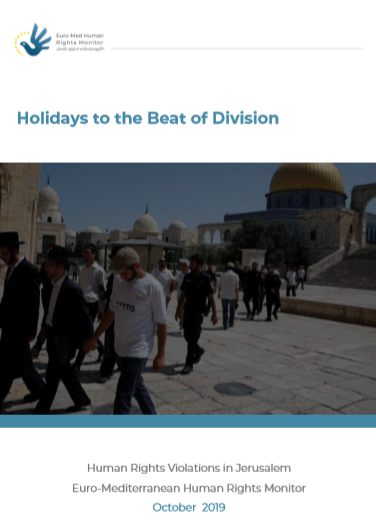 Geneva - Data published by the Euro-Mediterranean Human Rights Monitor showed that Israeli authorities committed a high level of violations in Jerusalem in October 2019, amid accelerated attempts to impose a temporal and spatial division in the Al-Aqsa and the Judaization of the city.

The report documented the storming of 5744 Israeli settlers of Al-Aqsa Mosque throughout 23 days out of the month.

The stormings witnessed a remarkable increase during the Jewish holidays with the participation of 3,690 settlers during the Sukkot holidays, which lasted from Sunday, 13th October 2019 to Monday, 21st October 2019, through the Moroccan Gate (Bab al-Magharbah), which has been controlled by the Israeli authorities since the occupation of the city in 1967.

In exchange for securing the settlers' incursions into Al-Aqsa and prayers at its gates, the Israeli forces prevented citizens who were removed from Al-Aqsa from gathering at the Chain Gate (al-Silsila Gate), one of Al-Aqsa gates, and repeatedly attacked them.

During October, the Golden Gate (Bab al-Rahma) chapel had been subjected to systematic attacks. It was raided at least six times during which police officers stormed a mosque while wearing their shoes and seized furniture and partitions inside it, as well as restrictions on access to Muslim worshipers, especially on Jewish holidays.

During this month, the Euro-Med Monitor documented 17 incidents of shootings and direct assaults by the Israeli forces in the neighborhoods of Jerusalem, which resulted in the injury of four Palestinians, including a child, who were wounded by live bullets, rubber-coated metal bullets, tear gas canisters or direct assaults. Seventeen Palestinians, including women and children, were subjected to beatings and violence by the Israeli forces, especially at the gates of Al-Aqsa while dozens were suffocated as a result of tear gas.

The Israeli forces carried out 107 raids into the towns and neighborhoods of Jerusalem, which included the arrest of 151 Palestinians, including 19 children and 11 women. In addition, 18 people, including women, and the governor of Jerusalem were summoned. At least six Palestinians were subjected to house arrests and fines.

The report documented at least three incidents in which the Israeli forces resorted to the dispersal of peaceful assemblies of Jerusalemites in the city using force.

The report monitored 17 demolitions/demolition orders against Palestinian' houses and properties in the city. The Israeli authorities demolished nine houses, forcing four of them to self-demolish their houses to avoid paying heavy fines, in addition to a commercial establishment and four shacks, a storehouse and warehouses, besides notifying the owners of two tents and a warehouse of demolition.

The Israeli forces have stepped up their attempts to prevent the Palestinian Authority from operating in Jerusalem banning any activities there, in an attempt to promote the Israeli sovereignty in the city.

The report warned of Israeli plans to impose a temporal and spatial division on the Al-Aqsa Mosque which threatens to spark a new wave of conflict and violence in the region.

The Israeli authorities continue to implement their plans to demolish homes and civilian objects, reflecting a tendency to carry out mass displacement of Palestinians and replace them with settlers in mass that is evictions contrary to international law.

The report also pointed out that Israel is continuing to Judaize the city and change its demographic character on and under the ground, which appeared this month through the cemetery, which is the first of its kind. The report concludes that such actions require official action from the Palestinian Authority and the international community to face these plans which amount to ethnic cleansing.