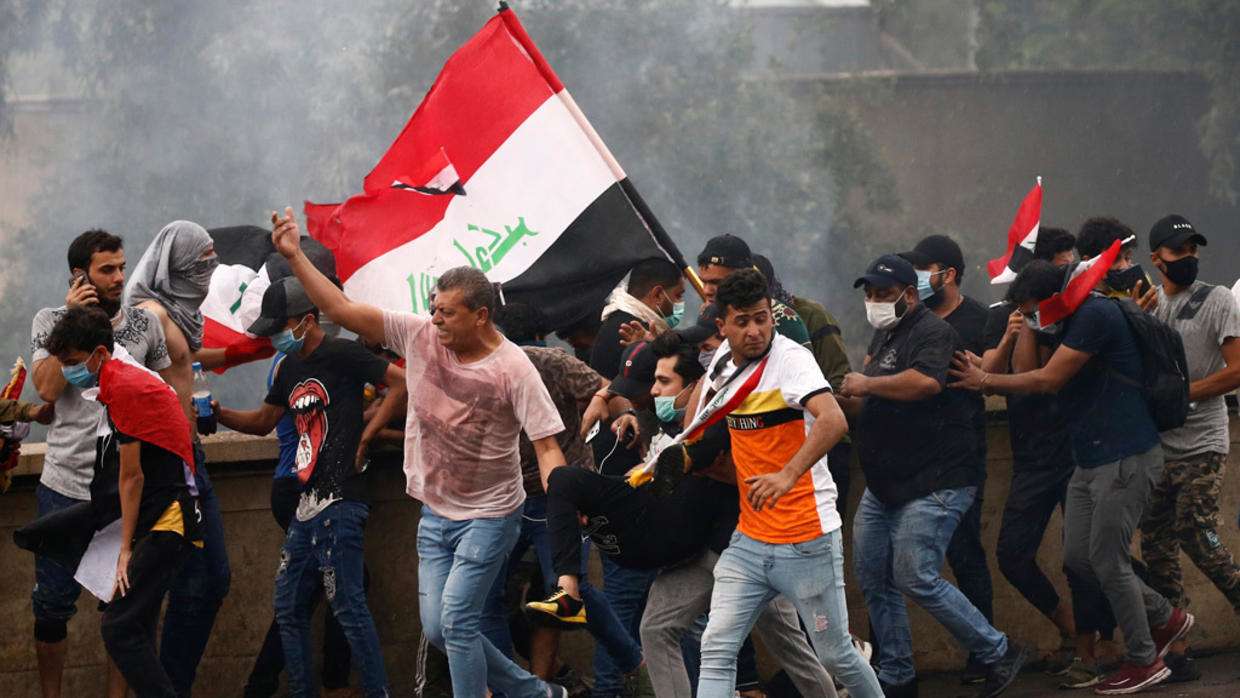 Geneva - The Euro-Mediterranean Human Rights Monitor has sent letters to the European Union and the French and German governments, urging them to exert pressure on the Iraqi government to stop the use of lethal force against ongoing popular protests, and to immediately stop the use of violence against peaceful protestors.

The Geneva-based organization said in a statement that it had sent letters to Federica Mogherini, EU High Representative for Foreign Affairs and Security Policy, Jean-Yves Le Drian, French Minister for Europe and Foreign Affairs, and German Foreign Minister Haikou Massu, briefing them on the bloody security campaigns against protesters calling for the overthrow of the government of Prime Minister Adel Abdul-Mahdi for failing to tackle corruption and solve the issues of power outages and unemployment in Iraq.

The Euro-Med Monitor expressed its grave concern over the ongoing violence and repression by Iraqi authorities which was made possible by the agreements signed between the Iraqi government and the European Union against popular protests over the past two months.

In its letter to the Iraqi government, the Euro-Med called for an immediate and serious investigation into the killings by security forces, calling for their withdrawal from areas of contact with protesters, and for ensuring that the perpetrators are brought to justice. The organization called for the release of detainees detained at the protests, compensation for all victims of violations for the illegal use of force by security forces and adopting effective steps to confirm the Iraqi government's commitment to freedom of opinion and peaceful assembly, as guaranteed by international and domestic laws.

Since the protests erupted on October 1, the Euro-Med Monitor has documented the deaths of more than 363 protesters by security forces and snipes, as well as the injury of more than 15,000 others for expressing their opinions, as guaranteed by the Iraqi Constitution and international agreements to protect the right to freedom of peaceful opinion and assembly.

The Euro-Med Monitor said its teams documented horrific details of killings and abductions of unarmed demonstrators, journalists, human rights activists and observers, and monitored a series of security campaigns organized by Iraqi police, security forces and military formations against demonstrations, especially in the provinces of Southern Iraq. The organization monitored the closure of several media outlets, most recently on November 24, as the Iraqi government issued a decision to close the offices of 8 television channels, and 4 other media outlets for 3 months for allegedly violating "the codes of professional conduct."

In a letter to the European Union, the Euro-Med Monitor said the French government continues to assist Iraqi internal security forces by providing them with military support and training, including weapons used to deal with peaceful demonstrations. The Geneva-based group noted that Germany too extended in September the training of the German mission (Bundeswehr) of the Iraqi local troops for a year.

The organization added in its letter to the German Foreign Minister, "We find it disturbing that the member states of the European Union continue to help the Iraqi authorities and have not yet considered to benefit from this assistance at least to ensure respect for human rights."

The Euro-Med Monitor pointed out that between 2014 and 2018, Iraq was the main country buying arms from the Czech Republic while during the same period, France provided 8.6% of arms imports to the Middle East, including Iraq.

The Euro-Med Monitor stated that although the EU imposed an embargo on arms exports to Iraq in 2003, in 2004 it adopted the Common Position 2004/553/CFSP, which authorized the sale, supply, transfer, or export of weapons and related materials required by the newly established Government of Iraq.

In its letter to the French Foreign Minister, the Euro-Med Monitor said that since the outbreak of the Iraqi protests, Paris has not reduced its military assistance nor taken necessary punitive measures against the Iraqi authorities to curb its use of violence against peaceful demonstrators, noting that this unfortunate slowdown could make France complicit in such tragic events taking place in Iraq.

The Euro-Med Monitor called on the EU to consider re-imposing the arms embargo, even partially, to ensure that military training and arms exports from EU member states are not used to commit new violations against peaceful protests.

The organization stressed the need for the European Union to consider the use of its assistance to Iraq in order to ensure that the government of Abdul-Mahdi complies with its responsibilities towards non-violent protests and to stop use of force against demonstrators.

The Euro-Med Monitor called on the European Union to pressure the Iraqi government to show adequate respect for human rights in Iraq, in addition to pledging not to use EU aid and military supplies to suppress peaceful protests.

The Euro-Med Monitor concluded by calling on the French government to suspend the training of personnel and other forms of assistance of the Iraqi government until it abides by its responsibilities towards non-violent protests, stop all forms of use of force against them, and open immediate and serious investigations into the brutal use of violence against them in the last two months and pledge to hold perpetrators accountable in accordance with Iraqi and international laws.