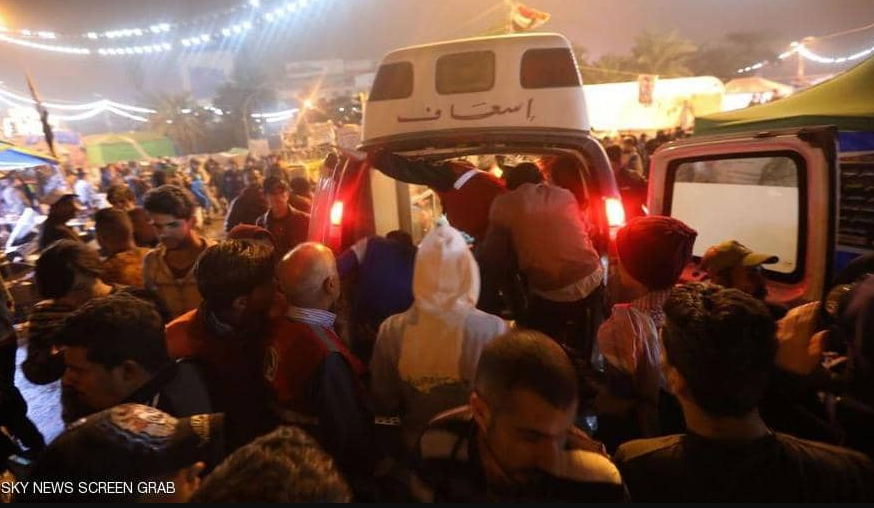 Geneva - The Euro-Mediterranean Human Rights Monitor expressed its grave concern over the attack of masked gunmen last night on hundreds of anti-government protesters in the center of the Iraqi capital, Baghdad. The attacks came in light of the unjustified silence of the international community and amid proven evidence about the involvement of Iraqi official parties in it.

The group attacked the demonstrators while fire was shot at the upper floors of the al-Sink building garage of which they took control of with the aim of intimidating the protesters and pushing them to flee to Tahrir Square to remain under the control of the Iraqi army.

Eyewitnesses reported that members of the al-Nujaba militias, the Iraqi Hezbollah, the Badr militia, Asaib Ahl al-Haq and Saraya al-Khorasani under the cover of some government agencies, including Baghdad Operations Intelligence and Brigade 11, were the ones who carried out the attack on the protesters, causing 25 deaths and more than 130 injuries near the main protest site in the center of the capital, Baghdad.

The Euro-Med indicated that these attacks come only one week after the announcement of Prime Minister Adel Abdul Mahdi his resignation after two months of anti-corruption protests.

Iraqi medical sources documented the death of more than 500 people and the injuries of more than 17,000 since the start of the anti-government and anti-political elite protests last October.

Members of militias, during their attack on Al-Khilani Square and its surrounding areas, killed a photojournalist Ahmed Muhanna, who was stabbed by a sharp knife and kidnapped journalist Zaid Muhammad Al-Khafaji, Ibrahim Al-Shammari and activists Fadil Jassem and Haider Al-Hasnawi.

The cases of kidnappings have increased alarmingly since the start of the protests, targeting many activists, civilians, paramedics, and human rights workers.

"The bloody attack in central Baghdad is an extension of systematic action targeting peaceful demonstrations and gatherings and is covered and supported by Iraqi government, in order to impose a siege on Tahrir Square as the main protest site in the capital, and to influence the leaders of the protests and push them to withdraw their demands issued during anti-government protests," said Tariq al-Liwa, legal advisor at the Euro-Med Monitor.

al-Liwa stressed that the use of excessive force and carrying out horrific attacks against peaceful protesters violate international and Iraqi laws, noting that the United Nations Code imposes rules of conduct for law enforcement officials exercising police powers to protect people from unlawful acts.

The Iraqi authorities bear full responsibility for these violations and for all attacks that affect civilians and the serious and systematic practices of human rights violations against peaceful protesters in the Iraqi provinces.

The Iraqi government must open an urgent and prompt investigation with the help of international experts into every death caused by the Iraqi security forces and militias assisting them, and prosecute those who violated the law, including leaders.