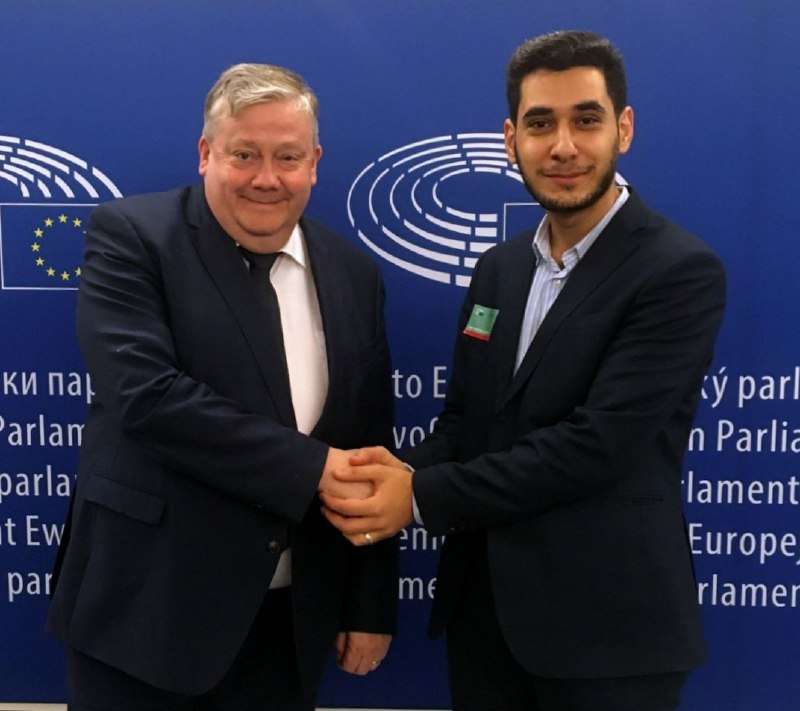 Brussels - The Euro-Mediterranean Human Rights Monitor held a meeting this week with the Vice-Chair of the European Parliament Delegation for Relations with the Arabian Peninsula (DARP), Mr. Mark Tarabella to discuss human rights situation in the Gulf region and advancing a more active role for the EP on the issue.

During his meeting with the Regional Manager of Euro-Med Monitor in Europe, Muhammad Shehada, Mr. Tarabella emphasized that the human rights situation in the Gulf is one of the top priorities of the work of the Delegation.Manager. He added that the Delegation, whose members were elected last September, is planning to organize visits to the Gulf in February 2020, to get a closer look at the reality of the human rights situation on the ground, with emphasis on issues that affect people's daily life.

Shehada and Tarabella discussed the danger of politicizing the work of human rights organizations, rather than focusing on issues that could be addressed to improve the lives of citizens in the Gulf region.

They discussed ways to focus on human rights issues that affect the daily lives of citizens such as violations of the rights of foreign workers, the sponsorship "Kafalla" system and its association with forced labor and restrictions imposed on freedom of opinion and expression in general in Gulf States.

Shehada briefed the European deputy on the conditions of work in Saudi Arabia in two fields of shepherding and agriculture where Saudi citizens refuse to work in those areas, and instead outsource farming and shepherd work to grossly underpaid and oppressed foreign workers, whose rights are largely ignored because these occupations are not covered by Saudi labor laws.. Around 90% of Saudi agricultural consumption is self-produced and 14% of global dates production comes from Saudi Arabia.

During the meeting, the Euro-Med Monitor Regional Manager raised the issue of the UAE authorities' ongoing detention of prominent human rights activist Ahmed Mansour, and the Saudi authorities recent kidnapping of Princess Basma Bint Saud, who is a prominent activist in women's rights and democratic work.

Shehada and Tarabella discussed the use of economic incentives by the European Union to urge Gulf states to respect human rights issues, in addition to the use of economic sanctions on Gulf exports to Europe and vice versa in the event of clear serious violations.

For instance, Euro-Med Monitor’s Regional Manager pointed out the economic incentive of reducing taxes on Gulf exports to the EU under the European Union's Generalized Scheme of Preference "GSP in the event of gulf states demonstrating sufficient improvement in respecting foreign labor rights and developing working conditions.

Shehada informed Tarabella of the Euro-Med Monitor priorities in the human rights work in terms of focusing on challenging the statistical narrative to shed light more closely on the victims in a rehumanizing way that highlights their individual stories.

He also discussed ways of joint cooperation by organizing joint activities between the Euro-Med and MEPs such as awareness-raising and policy-oriented lectures, seminars and roundtable discussion, in addition to hosting MPEs in the activities of the Euro-Med Monitor in Geneva at the UN Human Rights Council.

Shehada also introduced the Euro-Mediterranean activities in general and the most important recent activities, including the British and Brazilian Parliament seminars and the sideline events and workshops organized last September at the headquarters of the Human Rights Council in Geneva.

At the end of the meeting, Tarabella welcomed the Euro-Med Monitor activities, and called for staying in touch to exchange ideas and updates on the situation in Gulf region.