Violations Until Last Hour of the Year..Euro-Med Monitor’s report: 500 Israeli violations in Jerusalem in December 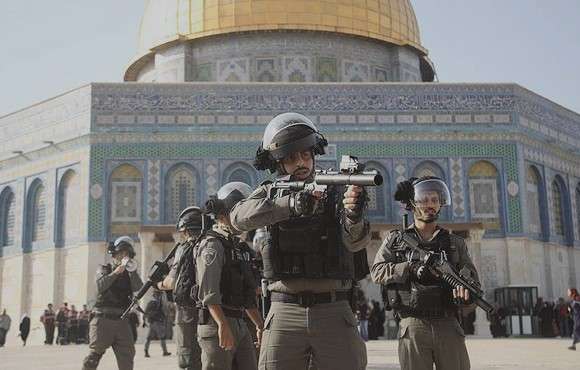 Geneva – A report published by the Euro-Mediterranean Human Rights Monitor showed an escalation in violations by the Israeli authorities in Jerusalem in December 2019, approved by the highest Israeli political level, and with American support and international silence, amid acceleration of Israel's attempt to end the Palestinian presence and change the demographic character and identity of the city.

Euro-Med Monitor documented in December 23 incidents of shootings and direct assaults by Israeli army in neighbourhoods of Jerusalem, which resulted in suffocation due to tear gas and bruises as a result of beating and abuse.

December witnessed a major escalation in incursions carried out by Israeli forces into towns of Jerusalem, where 149 operations were carried out which saw the arrest of 115 Jerusalemites, including 27 children, 12 women, summoning 24 others, and the imposition of house arrest and fines on 13 people, including children.

These violations took place in what is described as a tough year for the people of Jerusalem, which witnessed more than 1,950 arrests, including 500 children.

In December, the organization monitored 42 demolitions and distribution of notices in occupied Jerusalem, and the actual demolition of eight houses, of which three owners were forced to self-demolish their own houses, to avoid paying high fines, which led to the displacement of dozens of Palestinians, as well as the demolition of four facilities.

According to the available data, the demolitions carried out by Israeli authorities witnessed an increase in 2019 in East Jerusalem, reaching 201 compared to 177 throughout 2018 and 142 houses throughout 2017.

Euro-Med Monitor indicated that demolitions carried out by Israeli forces are part of a systematic policy to forcibly displace Palestinians, with the aim of changing the demographic character of the city noting that such acts amount to a war crime.

Al-jerjawi pointed out that the General Prosecutor of the International Criminal Court (ICC) announced her intention to open an investigation into war crimes in the Palestinian Territories, expressing her hope for a serious investigation into all Israeli violations, especially in Jerusalem, to achieve justice and put an end to Israeli impunity.

Euro-Med Monitor pointed to the policy of racial discrimination pursued by Israeli authorities, while imposing restrictions and obstacles preventing Palestinians from obtaining building permits, an excuse used by authorities to carry out escalating demolitions, under security, punitive, and other claims, which aim at destroying homes and displacing Palestinians, in exchange for allowing building Israeli settlement projects.

The report documented an opening of a railway linking Jerusalem and Tel Aviv by Israeli authorities, launch of a special lighthouse on the Hanukkah near the Gate of the Tribes in Jerusalem, and Israeli settlement societies establishment of a biblical Museum in Silwan in Occupied Jerusalem.

Euro-Med Monitor documented four direct attacks by settlers in Jerusalem during December, including damage to car tires and writing of racist slogans.

The organization monitored the arrest of four journalists, as part of Israeli forces’ policy of preventing official Palestine TV from working in Jerusalem.

At the end of the report, Euro-Med Monitor warned of Israeli plans to demolish more homes and residential neighbourhoods in Jerusalem in favour of implementing settlement projects and changing the demographic character of the city, renewing its call for the United Nations to assume its responsibilities to stop Israel's violations of relevant Security Council resolutions, by pressuring Israel to stop its violations against Palestinians in Jerusalem.