Raging Hell in Tripoli, Euro-Med Monitor report on the Indiscriminate Attacks on Civilians 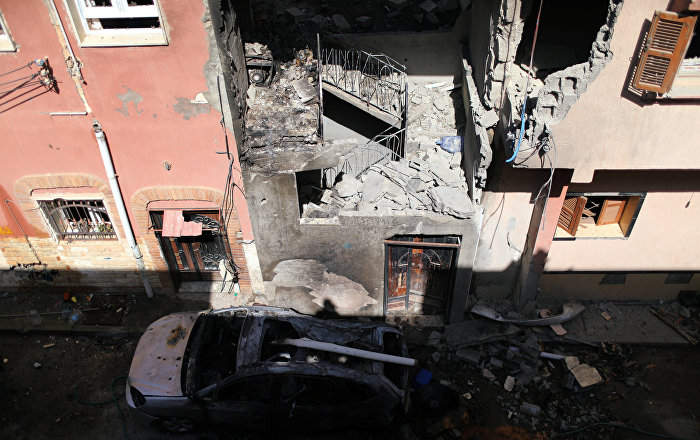 GENEVA- The Euro-Mediterranean Human Rights Monitor calls on Libyan parties of the conflict to immediately enforce a ceasefire in the south of Tripoli, and launch an independent investigation into human rights violations during the military attack launched by the retired Major General Khalifa Haftar since April 4, 2019.

Euro-Med Monitor stated in a report that the clashes began more than 8 months ago between the retired general Khalifa Haftar and the internationally recognized government of National Accord. Such clashes have resulted in severe and grave violations against civilians and created massive destruction to infrastructure, forcing hundreds of thousands to flee their homes.

Euro-Med Monitor stresses that continued attacks bode-ill for more horrific crimes against civilians, which necessitates on the international community to take more responsible and urgently intervene to prevent the expansion of the fighting cycle.

The Euro-Med Monitor's report, entitled "Ragin Hell ... Tripoli's Civilians in the Spotlight of Indiscriminate Attacks" documents specific incidents of fatal and indiscriminate attacks against civilians and refugees, in which explosive weapons were used on a large scale.

The 15-page-report, sheds light on the ugliest mass murders that accompanied the military attack in Tripoli. The most prominent one is the targeting of a migrant detention center that holds 600 hundred people, most of whom are Africans, in the "Tajoura" suburb, east of Tripoli, which led to the death of more than 44 deaths and the injury of more than 130.

According to the report, the most violent of these attacks was on August 5, 2019, at 12:30 pm, when a helicopter, believed to belong to Haftar forces, launched around 4 raids targeting a civilian gathering of people who were participating in a wedding in the city of Murzuq, southwestern Libya, killing about 40 civilians and wounding 37 others.

Euro-med monitor states that countries such as Turkey, the United Arab Emirates, Jordan and Sudan are still exporting guided missiles, armored vehicles, and drones for armed groups despite the arms ban imposed by the United Nations against Libya since 2011, according to resolution number 1970.

Tariq Al-Liwa, the Euro-Med Monitor Legal Researcher, calls on the United Nations Support Mission in Libya, to work hard to stop the ongoing violations and put clear mechanisms that guarantee protection for civilians in accordance with the UN Security Council resolutions, and work to end impunity.

Tripoli has witnessed accelerating battles since April 4, 2019, after the announcement of the military attack by Haftar forces to take control over the city ruled by the internationally recognized Libyan National Accord government.

As a result, violent clashes have broken out until today, claiming the death of more than 300 civilians, including children, elderly and women, and the injury of hundreds others. In addition, it resulted in the displacement of about 160,000 people from the areas of the clashes.

The Euro-Mediterranean Human Rights Monitor asks all concerned parties to assume their responsibilities for such unjustified and unacceptable attacks; to stop targeting densely populated areas; and to guarantee the safe evacuation of refugees and migrants held in detention centers to safer places.

The international human rights organization renews its appeal to the international community to enforce the comprehensive weapons embargo in Libya imposed by the UN Security Council , in line with Resolution No. 1970 issued in 2011.

Euro-Med monitor calls upon international actors on the Libyan scene to pressure General Haftar to withdraw his forces, resort to negotiation instead of the military solution, and the need to adhere to the Security Council's call to stop military attacks that threaten Libyan stability.