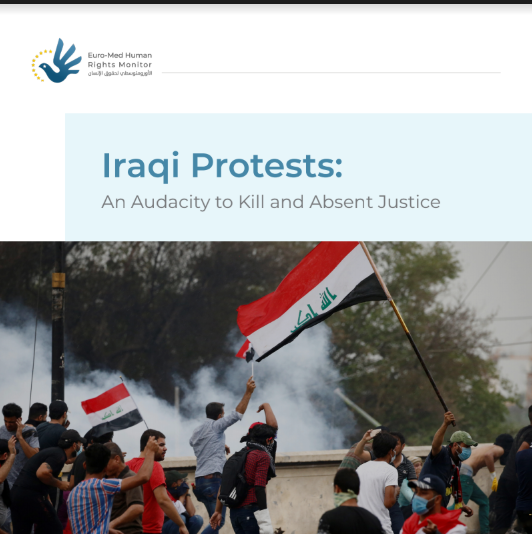 Geneva - The Euro-Mediterranean Human Rights Monitor urged the Iraqi authorities to open a comprehensive investigation into all the killings, kidnappings and torture Iraq has witnessed since the protests broke out last October 1 and to ensure it is independent, and to release all detained protesters charged with participating in protests unless they are charged or convicted in line with Iraqi law.

The Geneva-based group said in a report issued on December 19, 2019 that the protests in Iraq were peaceful and seemed at their outbreak to be spontaneous without any interference or invitation from any political or religious party, and the slogans and chants of protesters in the streets continued to express their demands at popular gatherings, despite the excessive force and resorting to repressive security measures by the armed militias of the Iraqi government.

The report, titled "The Iraqi movement: Daring to Kill and An Absent Justice," highlighted the most important violations that Iraqi protesters are still subjected to, according to testimonies collected and documented by victims of these attacks, in addition to the reasons that led Iraqis to take to the streets to protest against the tragic conditions experienced by the country like the widespread corruption, the lack of services, and the widespread poverty.

Tariq Iliwa, a researcher at Euro-Med Monitor, said: “Although the Iraqi government does not recognize the legality of the popular movement in Baghdad and the rest of the provinces, from a legal point of view, the Iraqi Constitution of 2005 emphasized the importance of respecting the right to peaceful protest and freedom of opinion and expression, as International law also affirmed these rights in many international covenants and treaties."

Iliwa added that government forces and armed militias have carried out forcible kidnappings and disappearances to intimidate protesters, with the aim of reducing the intensity of the protests until they stop.

According to the 15-page report, Iraqi government forces and armed militias have adopted, since the outbreak of the protests, a number of repressive and brutal methods against protesters, killing hundreds, assassinating dozens of activists, arresting and kidnapping thousands of protesters, and closing a number of institutions and press offices.

The report documented testimonies of detainees, some of whom were released, while others died as a result of torture by security forces or armed militias, including activist Hassan al-Husayni al-Husayni, who was kidnapped on November 25 by security forces wearing civilian clothes while he was at one of the protests. He was found alive in Ibrahimiya area eight hours after his abduction, with signs of torture on his body.

According to testimonies collected by Euro-Med Monitor, hundreds of detainees were tortured in various ways, such as beatings, use of electric sticks, hanging and other cruel and degrading means.

The report provided statistics on the protests that took place in Iraqi cities, according to the documentation of Euro-Med Monitor’s team and the High Commissioner for Human Rights in Iraq from October 1 to December 15.

Euro-Med Monitor called on the Iraqi authorities, in line with their international commitments, to respect human rights by taking all executive, legislative and judicial procedures to make sure Iraqis can enjoy their right to peaceful protest and freedom of opinion and expression.

Euro-Med Monitor stressed that security forces should commit to the basic principles of the United Nations on the Use of Force and Firearms by Law Enforcement Officials.

Euro-Med Monitor recommended that it is necessary to work to prosecute all leaders and those responsible for violations committed against protesters, calling on authorities to respect the right of protesters to peaceful assembly as long since it is a constitutional right affirmed by the Iraqi Constitution, and to refrain from using force against them. Those who are involved in such violations often prompt criminal sanctions against them internally or internationally.

Euro-Med Monitor called on Iraqi authorities to respond to the demands of the protesters by adopting a set of legal, economic and social reforms. The group concluded by urging the legislative authority to enact a law regulating the right to protest and peaceful assembly in a manner that guarantees lifting all restrictions on rights guaranteed by International Humanitarian Law.