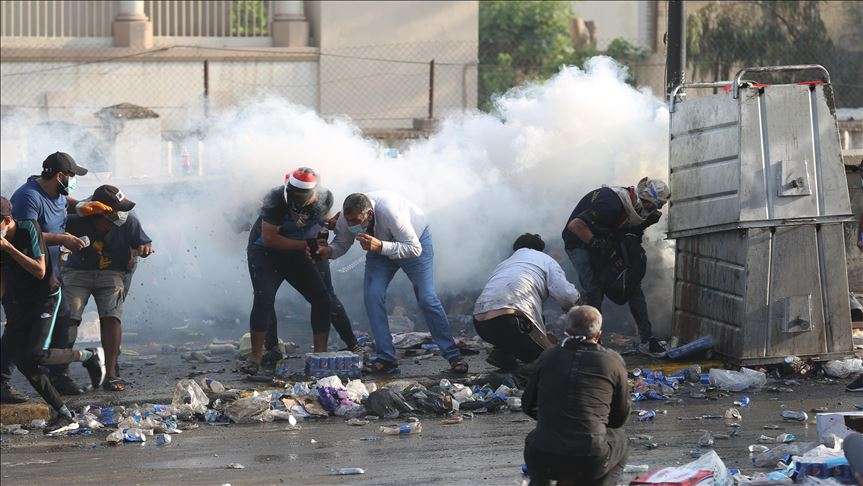 Geneva- The Euro-Mediterranean Human Rights Monitor submitted an urgent complained on Saturday to the United Nations Special Rapporteur for the Promotion and Protection of the Right to Freedom of Opinion and Expression about the Iraqi authorities’ serious violations against an activist.

The Euro- Med Monitor’s complaint included the testimony of a former Iraqi activist detainee, asked to be unnamed, who was kidnapped by the Iraqi counter-terrorist forces earlier this year. The complaint explained the forms of torture he faced due to his political activity and participation in the demonstrations in the country.

Besides, the organization sent an urgent letter to the Iraqi government, referring to torture practices to which the activist was subjected during his detention, and the constant threats and intimidation he faces, calling on the Iraqi authorities to investigate this incident and the practices of security and counter- terrorism forces and to hold those responsible accountable for threatening activists and protestors.

The activist was arrested in the prison of the counter- terrorism headquarters in Nasiriya Governorate on January 2020 without providing any permission by a public authority to do so on charges of “collaborating with foreign parties and obtaining funding to destabilize the country”.

During his arrest, the activist was blindfolded and tied down, and his phone was confiscated and he was interrogated about videos and photos of Iraqi demonstrations he recorded on his phone. He was brutally beaten, suffocated by plastic bags and beaten with batons until he lost his consciousness and he was awakened by electric shocks on sensitive parts of his body.

The activist said in his testimony that, throughout his detention period, he was beaten and transformed from one cell to another inside the prison. He was accused of communicating with the UN and sending videos about the current demonstrations in Iraq. He added that investigators forced him to sign documents he was not aware of their contents.

The next day, he was taken to Nasiriya court and the papers that he forcibly signed were submitted to the judge then they took him out without knowing any details, including the verdict issued against him, and he remained throughout his detention in solitary confinement. After two days, the activist's family paid a large sum of money to officers through a mediator from an armed militia in order to find out about his place of detention and to appoint a lawyer to release him on bail. The attempt failed due to the refusal of the judicial authorities, although there was no evidence against him.

Later, the activist was threatened with death in case of participating in the demonstrations or speaking about his detention as an investigator directed a pistol towards his head, threatening him with severe beatings all over his body and using electricity to torture him.

The activist added that he was left in solitary, insulted all the time and subjected to psychological and physical torture causing the loss of 13kg of his weight in only one week. He was released after seven days of detention on bail, and he was threatened of arrest again if he participates in protests.

Euro-Med Monitor’s complaint indicated that the activist‘s life is in danger as he is the first detainee who reveals what is going on inside detention centers, calling for providing him with protection urgently. The complaint letter mentioned the Iraqi protests that broke out in October 2019 to demand basic rights following the deteriorating economic conditions in the country. The protests were confronted by a large presence of Iraqi security forces and armed militias who attacked protesters deliberately.

The violations against protesters included the use of weapons, sound and gas bombs, in addition to kidnapping protestors illegally, arresting thousands without directing any formal charge against them and torturing activists who participate in demonstrations and hiding them for many weeks without the authorities’ revealing their whereabouts. This also includes bringing them to trial on the basis of loose and non-existing charges, such as collaborating with foreign states and obtaining funds to destabilize the country, according to the authorities.

Euro-Med Monitor called on Mr. David Kai to pressure the Iraqi authorities to stop their serious violations of the right to peaceful protest and freedom of expression and to hold accountable those involved in practices of arbitrary detention and torture and bring them to justice.