Jordan: Punishment of prisoner of conscience with a one year imprisonment reflects bleak justice system 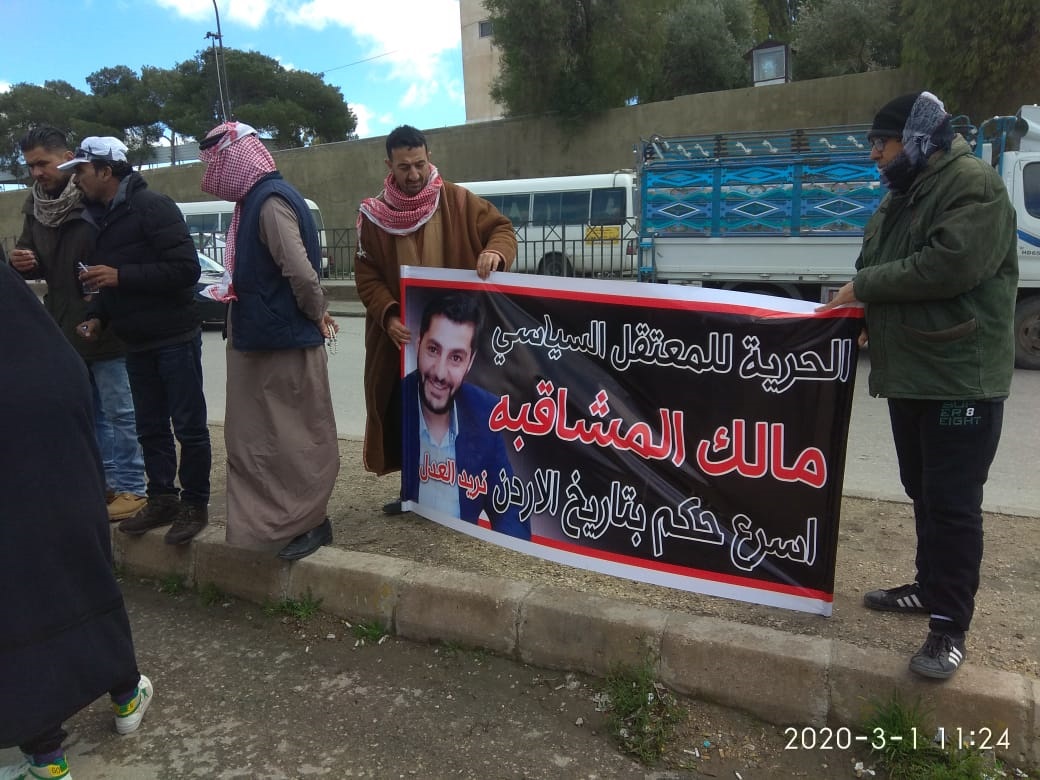 Geneva - The Euro-Mediterranean Human Rights Monitor has called on the Jordanian authorities to immediately release hunger striker, Malik Mashaqba, expressing a grave concern at the judicial system’s behavior in dealing with his case.

The Jordanian authorities arrested Mashaqba, 31, on January 26 2020, for publishing videos of Jordanian bloggers who expressed their rejection of the gas agreement signed between Jordan and Israel.

Salah, Mashaqba’s brother, told Euro-Med Monitor that the authorities transferred his brother to the Public Prosecutor on January 27th, and he was charged with "insulting the King, the Queen, and the guardians of the throne, and defaming official bodies," noting that his brother was in pre-trial detention for a week and his family submitted four requests for his release him on bail pending the trial, but all of them were rejected.

Salah indicated that the family went on February 3 to visit him inside Juwaida prison, and asked to check on him and have him sign the required papers to appoint his father, who is a lawyer, to defend him. But the prison’s authorities informed them that Malik had not been transferred to the court yet. And the Judicial authorities don’t have his file yet.

He added that the next day, February 4, his family repeated their attempt to visit their son, but were surprised by his referral to the court without being informed, and without giving them the opportunity to hire a lawyer to defend him. Before the family's arrival at the court headquarters, the verdict had already been issued for a one-year imprisonment sentence, based on charges brought against him by the Public Prosecutor.

Salah explained that his brother has started to suffer weakness in his vision and heart muscle, inability to move, loss of balance, chest pain, and limb numbness, pointing out that security services use iron handcuffs to chain him when transferring him to the hospital despite his repeated complaints that they cause him pain. However, the security forces always ignores his request.

“The circumstances accompanied the arrest of Mashaqba and his fast trial reflect a bleak picture of the justice system in the country, and demonstrate the authorities’ intention to punish activists and deter them from expressing their views on political and social issues, and indicate the extent of restrictions on freedoms,” Tariq al-Liwa, Euro-Med Monitor’s legal advisor.

Al-Liwa added that Mashaqba’s conditions of detention and trial raise questions about the extent to which the judicial and security authorities in Jordan follow the constitution, and the Code of Criminal Procedure, which guarantees the right to defense and to appoint a lawyer, as Article 7, Paragraph 2 of the Jordanian Constitution states that “Every infringement on rights and public freedoms or the inviolability of the private life of Jordanians is a crime punishable by law.” Moreover, Article 15, in the first paragraph, affirmed that “The State shall guarantee freedom of opinion. Every Jordanian shall be free to express his opinion by speech, in writing, or by means of photographic representation and other forms of expression, provided that it does not violate the law.”

“Denying Mashaqba meeting with his lawyer explicitly contradicts Article 63 of the Code of Criminal Procedure No. 9 of 1961, as the first paragraph of the Article states that ‘When the defendant appears before the Public Prosecutor, he shall verify the identity of the defendant, read his accusation, and ask him to give his answer notifying him that he shall have the right to refuse to answer any question except in the presence of his attorney,’” Al-Liwa added.

The judiciary behavior explicitly violates the provisions of international law such as the Universal Declaration of Human Rights and the International Covenant on Civil and Political Rights and many agreements that guarantee freedom of opinion and expression and criminalize any detention against the background of political and social activity.

The Jordanian authorities should release the detainee in light of his deteriorating health condition and they bear full responsibility for his safety. The Jordanian authorities should lift restrictions on freedom of opinion and expression, stop violating domestic laws and international obligations, and should not politicize the judicial system and use it as a tool to intimidate and detain opponents of official policies.