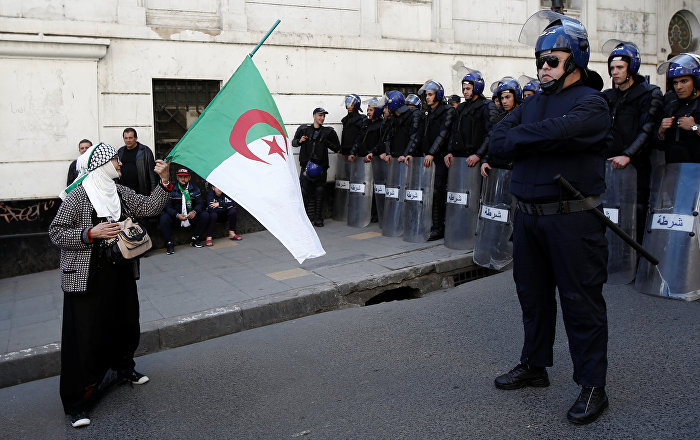 Geneva –Algeria’s escalating crackdown in the name of security is a troubling manipulation of the pandemic crisis, warns the Euro-Mediterranean Human Rights Monitor. In recent days, the Algerian government has unleashed a wave of arbitrary arrests and court rulings without legal basis, targeting Hirak (the popular movement) representatives and demonstrators.

At a time when COVID-19 is sparking calls for the release of individuals from prisons and detention centers to control the risk of rapid spread, Algerian authorities are using the state of emergency to escalate repression and grow the number of political detainees.

Drareni’s imprisonment, ordered by the Indictment Chamber, superseded a previous ruling by investigating judge of Sidi Mohamed court, which placed him under judicial supervision.

In the meantime, Algerian authorities also detained actor Ahmed Bouanani on charges of insulting a governmental body, after publishing a video in which he criticized authorities.

Abbad Kada, assistant prosecutor in the Tiaret Court, western Algeria, was arrested on charges of leaking documents and files containing information about a dissident journalist. However, the Judges Syndicate found that the arrest was made in a spirit of retaliation against Kada.

In addition, last Tuesday, the Court of Appeals in Algeria sentenced prominent dissident Karim Tabou to one year of imprisonment on charges of "inciting violence" and "violating national security." Tabou had been detained since September for supporting the popular resistance movement.

Activists have recently complained about a campaign of arrests that affecting their representatives, including Ibrahim Al-Dawaji, Suleiman Humaitoush and Samir Belarbi. They warn of efforts to appeal rulings in favor of a number of activists.

These actions come after the political and civil arms of the popular resistance movement agreed on March 16 to temporarily suspend demonstrations due to fears of the spread of the novel coronavirus.

The security escalation seems to be designed to exploit the coronavirus crisis, using it to retaliate against activist leaders. All political detainees must be released immediately, the pledges of Algerian President Abdelaziz Taboun to implement reforms and introduce new freedoms must be honored, and the International Covenant on Civil and Political Rights, which Algeria ratified in 1989, must be respected.