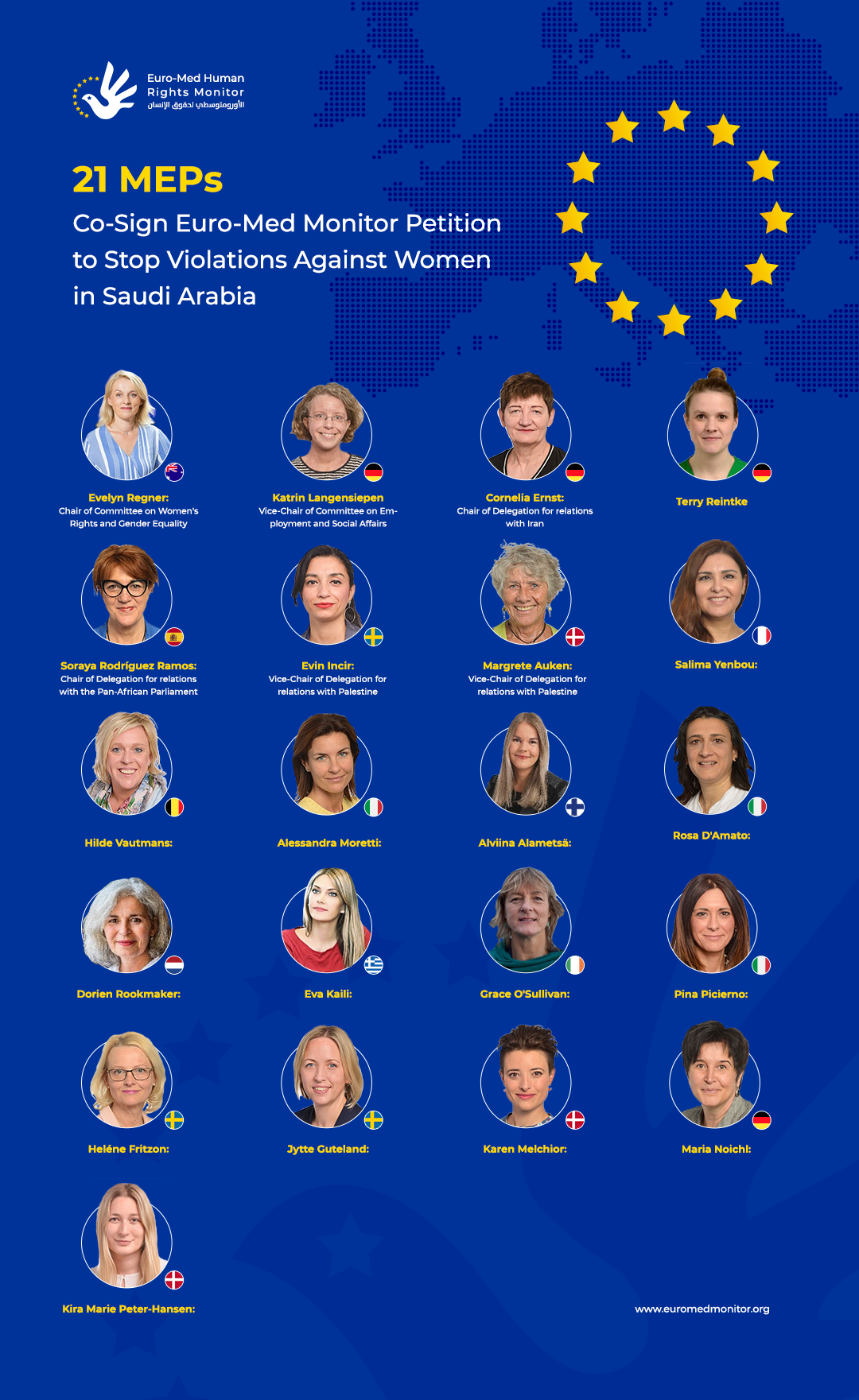 On the International Women’s Day on March 8, 2020 the Euro-Mediterranean Human Rights Monitor released a report entitled ‘Dead-Letter Reforms: Saudi Women’s Rights Still at Risk’, which documents how despite recent promises of reform in Saudi Arabia in regards to women's rights to drive, travel freely, work and earn salaries equal to men, reality for Saudi women still does not match those pledges.

Not only do Saudi women continue to live under a guardianship system that appoint male relatives or spouses in charge of women’s choices to marry, travel, work or receive necessary health care, but furthermore, tens of Saudi rights activists have been arrested and detained for merely campaigning for the very rights the government has officially promised, including Lujain Hathloul, Dr. Sheikha Al-Arf, Dr. Aziza Al-Youssef and others.

Most said women have been physically and psychologically tortured in detention.

Euro-Med Monitor’s team decided consequently to create a strong momentum that pushes for positive change in the Saudi Kingdom.

The team created the following petition that was co-signed by 21 women Members of the European Parliament to bring the issue to light, as we believe that MEPs hold a strong mandate to make a difference, bring such crucial issues to the public’s attention and mobilize for change.

Petition: Violations against women in Saudi Arabia Must Stop

We, the undersigned Parliamentarians, call on the Saudi government to end all forms of discrimination against women in the Kingdom on all legislative, executive and judiciary producers, and to release all women activists who were detained for calling for their rights.

Despite recent promises of reform in Saudi Arabia in regards to women's rights to drive, travel freely, work in broader variety of positions and earn salaries equal to men, reality for Saudi women still does not match those pledges.

For instance, on July 31, 2019, the Saudi Council of Ministers pledged to allow women over the age of 21 to obtain a passport and travel without a guardian’s permission, however, Saudi women’s ability to freely obtain a passport or travel outside the country is still being compromised by the Kingdom’s continued use of an electronic platform called Absher through which citizens can apply for passports. If an applicant is female, the platform allows her male guardian to track and control her travel.

Consequently, many employers refuse to hire women for jobs that involve traveling out of fear that their guardians may prevent them from fulfilling their responsibilities.

Another prominent example is that many public hospitals in Saudi Arabia still demand a guardian’s approval when a woman needs surgery or other serious medical procedures.

Additionally, Saudi women can still go to prison if reported “absent” from home without family’s consent or “disobedient” to her guardian’s will such as by refusing an arranged marriage. If imprisoned, Saudi women cannot leave prison after serving their full sentence if their families refuse to take them.

In such cases, female prisoners are transferred to a ‘care home’ with similar prion environment until their families accept to receive them or they get married.

As a result, in 2019, the World Economic Forum’s Global Report on Gender Disparities rank Saudi Arabia 146th among 153 countries in assessing women’s freedom.

Another report on the status of women’s rights in Arab and European countries, issued by the World Bank, gave Saudi Arabia zero points for freedom to travel and earn a suitable wage. According to that report, women workers in Saudi Arabia are paid 56% less than men.

Furthermore, since 2017, at least 25 Saudi women’s rights activists have been arbitrarily arrested for calling for women’s rights, including the very rights the state has legally enacted such as the right to drive. Some of those activists remain in prison or are pending trial until today, including Lujain Hathloul, Dr. Sheikha Al-Arf, Dr. Aziza Al-Youssef and others. Most said women detainees have been physically and psychologically tortured.

We, therefore, call on the Saudi government to immediately release all women detainees that have been imprisoned for legitimate activities, to drop all charges against them and to compensate them fairly. We also call on the Saudi government to fully implement all reforms it has promised, and to lift all restrictions on the basic freedoms of Saudi women, such as the choice of who and when to marry and the ability to study abroad and travel.

For more information on this please visit: https://bit.ly/2wPFcFn