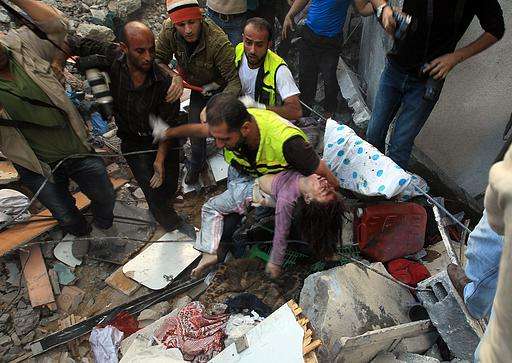 A European human rights group condemned the massacre of “Al Dalou” family that Israeli forces   committed  in the Gaza Strip on Sunday evening. Nine members of “Al Dalou” family lost their lives, all of whome are women and children. The youngest is 11 month old and the oldest is a 74 year-old grandmother.

In a statement released on November 18th, The Euro-Med Monitor confirmed that its field team of observers documented an “F-16” war plane bombed Al Dalou house located in Al Nasser Area of Gaza city at or around 17:15 pm on Sunday 18th of November. Experts estimated that the bomb weighed over half a ton.

The field team added that the Israeli shelling that targeted the house of Jamal Al Dalou on an estimated area of 300 square meters heavily damaged seven other houses in the perimeters. Three of the surrounding houses that were shelled were destroyed entirely resulting in the deaths of 10 civilians, including four children and five women, young Muhammad Al Dalou is still missing under the rubble.

The  bombing of Al Dalou’s family came in a series of ongoing attacks that started six days ago against  neighborhoods in the Gaza Strip. The international community have failed to stand its legal and moral obligations regarding the protection of civilians in conflict  areas .

The Observer stated that all testimonies indicate that the Israeli shelling were not proceeded by any warnings to evacuate the targeted houses. Rescue  teams face  many challenges in area that is one of the most densely populated areas on the planet, with narrow alleys that to the houses which were destroyed.

The Euro-Med Monitor for Human Rights, based in Geneva called on  the Secretary-General of the United Nations, Mr. Ban Ki-moon to react by condemning the Israeli use of excessive force in civilian areas.

Bombing the civilian population  in the Gaza Strip is in total violation of international laws and human rights agreements and conventions.

It also called upon the European Commission and the European Union, to take a firm stand against these   Israeli violations of international laws calling for quick and practical steps to end this ongoing bloodbath and civilian casualties.

TheEuro-Med Monitor for Human Rights warned that the continued silence of the international community  in the face Israeli  escalation in the Gaza Strip, will be understood by  the Israeli authorities as a green light to commit more atrocities in the Gaza Strip. The Observer conducted numerous calls, and lobbied at the European level, in order to prosecute Israeli leaders responsible for killing of Palestinian civilians, as "war criminals", what is taking place in Gaza today is but a repeat of the war crimes that was committed and went unpunished in the “Cast Lead” operation that Israel carried out against the Gaza strip in 2008 -2009.