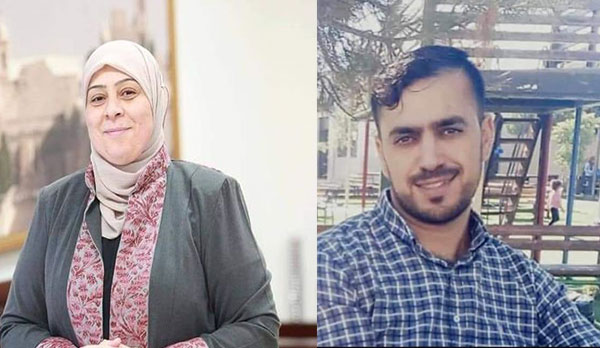 GENEVA - The Euro-Mediterranean Human Rights Monitor has expressed a grave concern over the arrest of Palestinian Ahmed Dawoud al-Khawaja by security services in the West Bank, for 12 days in a row, against the background of a comment he made to the Facebook page of Leila Ghannam, the Governor of Ramallah.

The Geneva-based group noted that a force from the Preventive Security Services arrested young man Ahmed Al-Khawaja on Saturday 18 April 2020, after his house in the town of Ni'lin was raided in the central West Bank, transferring him after two days to the Public Prosecution on charges of inciting sectarian strife because of his comments on Facebook, and his detention was extended for 15 days more days.

According to the Euro-Med Monitor's follow-up, the arrest of Al-Khawaja, who previously spent more than 18 months in Israeli jails came after he wrote a comment on a post by the Governor of Ramallah Leila Ghannam on Facebook, in which he expressed his surprise at the closure of mosques due to restrictions adopted due to the pandemic, while Easter ceremonies were allowed for Christians.

While the Euro-Med Monitor affirms the necessity for citizens to comply with precautionary measures to prevent the spread of the Coronavirus COVID 19, it warns that the detention of Al-Khawaja is against freedom of opinion and expression. What he wrote was just a question by a citizen to an official and does not represent any insult or incitement to sectarian strife; the responsible authorities could have clarified to the public that the procedures don’t not include any discrimination against any background.

The Euro-Med Monitor pointed out that an important figure like the Governor of Ramallah Laila Ghannam, whose field efforts in the face of the Coronavirus COVID 19 pandemic had been appreciated and praised on social media platforms, should announce her refusal of arresting anyone just for commenting on her personal Facebook page. Only through dialogue and direct discussion on Facebook can misconceptions be made clear without the need for arbitrary arrest and detention.

The Ramallah Governor's office responsed to the Euro-Med Monitor's question on the arrest of a Palestinian over a Facebook comment saying that Al-Khawaja was arrested under the authority of the Public Prosecution, not the Governor, and emphasized that the reason for the arrest was Al-Khawaja's comment on the Governor’s Facebook account in which he raised “sectarian strife,” adding that “Muslim-Christian issues are very sensitive, especially in a city inhabited by both Muslims and Christians.”

The Euro-Med Monitor stressed its refusal to take advantage of the declared state of emergency to confront the Coronavirus COVID 19 pandemic to justify campaigns of arbitrary detention of activists and social workers, in a clear violation of human rights agreements which Palestine ratified as well as the local laws in the Palestinian territories. The organization affirmed its condemnation of the Palestinian Authority's continued broad accusations and use of the Cybercrime Law to arrest journalists, writers and social media influencers, noting that the PA is using the law to silence and suppress freedom of opinion and expression in the West Bank.

The Euro-Med Monitor called on the PA to drop the charges against Ahmed Al-Khawaja, release him immediately, and stop any prosecution and detention against the background of freedom of opinion and expression.

Ramallah Governor, Laila Ghanem, is urged to take a stand against using the emergency law as a pretext to restrict freedoms and keep Al-Khawaja away from his wife, child and sick mother during the month of Ramadan, and detain him in difficult circumstances despite the Coronavirus COVID 19 pandemic. During this time, prisoners, in many parts of the world, who have been arrested for light offences have been released.

The Cybercrime Law, approved by the Palestinian Authority in June 2017, included in provisions that violate the Palestinian Constitution, principles of public freedoms and human rights rules that guarantee freedom of opinion and expression which should not be restricted except in cases of necessity and complex conditions.

The law included 61 articles, some of which were loosely written, making it subject to the Palestinian Authority's interpretations to criminalize activists who oppose its policies. According to the very loose texts of the law, Palestinians can’t know what is permitted and what is prohibited, which make them subject to arrest without knowing their crimes.