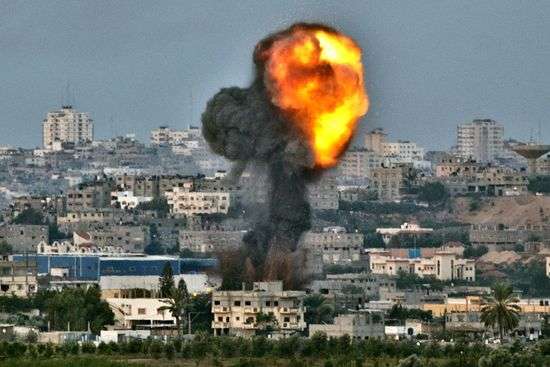 The human rights organization, which maintains a monitoring team in the Gaza Strip, reported Tuesday that its field workers have documented 364 missiles fired by the Israeli navy, 1,114 air strikes and 165 artillery shells. At the close of Nov. 19, 110 Palestinians had been killed, including 25 children, 14 senior citizens and 12 women.

Seventy-two percent were civilians, with no active involvement in the resistance. Another 891 Palestinians (including 277 children, 164 women and 62 seniors) had been wounded.

In contrast, various Israeli sources report a total of 664 rockets from Gaza have hit southern Israel. Three Israeli civilians have been killed and a reported 10 civilians and four soldiers have been injured.

The field workers also documented that Israel has bombarded 822 governmental and residential buildings in Gaza, of which 71 were completely destroyed, 187 sustained severely damage and 559 were partially damaged.

Euro-Mid Observer for Human Rights is calling on the UN Commissioner and EU countries to take a clear stand against the ongoing Israeli breaches of the international law in Gaza, and to take urgent steps to end the continuing bloodbath among civilians.