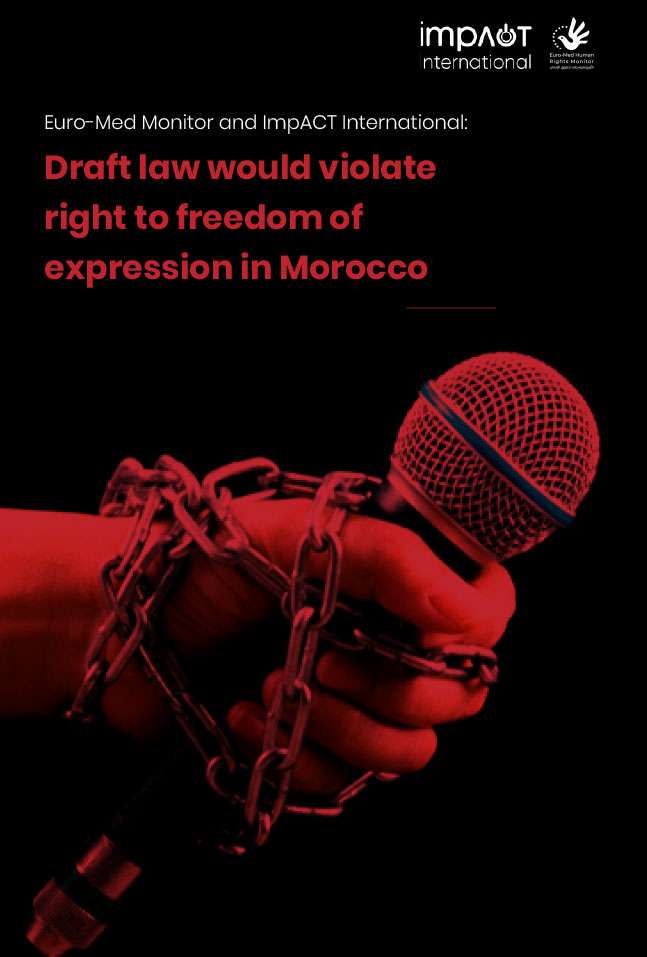 A draft law in the kingdom of Morocco could be used to silence dissenting voices if enacted, warn the Euro-Mediterranean Monitor for Human Rights (Geneva) and Impact International for Human Rights Policies (London). The organizations say the existence of the draft law raises serious questions about the Moroccan government's intentions and commitment to freedom of expression in cyberspace.

Their warning came in a joint report released by the two organizations Wednesday morning, in which they analyzed draft law No. 22.20 on the use of social networks, open broadcast networks and other similar platforms.

Although the Moroccan Ministry of Justice postponed consideration of the draft law due to the widespread controversy that erupted following leakage of the text, the fact that it was merely tabled rather than completely rejected poses a threat to civil freedoms in the kingdom.

"During our legal review of the leaked draft, Euro-Med Monitor and ImpACT International identified 17 aspects that would violate freedom of expression and thus are inconsistent with the Moroccan constitution," says Euro-Med Monitor policy advisor Ghadir Awwad. "An indication of the negative intentions of the bill is that more than half of its articles impose the penalty of imprisonment for three months to five years, in addition to heavy fines, with scant pretext."

The report concludes that if passed, the law as currently written would legalize censorship of digital content. Persons accused of publishing “fake news,” for example, could be imprisoned for up to two years and fined as much as 5,000 Moroccan dirhams (about $500).

Other provisions in the draft law would criminalize calls to boycott goods and criticism of product quality, thus denying citizens the right to express their opinions, while allowing commercial activity to continue unrestricted.

"If passed, the bill would require internet service providers to monitor for activity labeled as illegal and remove or block related content. Making such distinctions is outside of their mandate and competence," said Sarah Burashed, an ImpACT International researcher.

The draft law would grant the government the authority to impose fines of 500,000 Moroccan dirhams ($50,614) on ISPs that don’t comply, temporarily suspend their operations or rescind their licenses.

In a joint statement, Euro-Med Monitor and ImpACT International recommend that the draft bill be officially withdrawn to preserve national cohesion and avoid causing Morocco to be classified as exploiting the coronavirus pandemic to violate basic rights and freedoms.

Furthermore, the two organizations stress that all forms of censorship should be stopped to ensure freedom of opinion and expression, with any complaints related to published content addressed based on specific complaints by those affected.