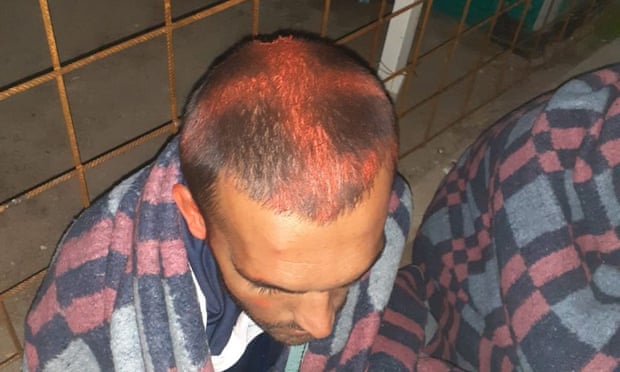 The increasing brutality and excessive force illegally exercised by the Croatian Police against asylum seekers are extremely disturbing and necessitate immediate action to hold the perpetrators accountable, Euro-Mediterranean Human Rights Monitor said in a statement today. We are particularly alarmed by the Croatian Police’s recent actions of spray-painting asylum seekers with Cross symbols before turning them back to Bosnia and Serbia, which constitutes a racist criminal action that violates International and EU laws regarding the right to asylum and non-discrimination.

In recent month, dozens of asylum seekers who attempted to cross to Croatia from Bosnia complained of the Croatian Police discrimination and abuse, as they were sprayed with orange paint on their heads, while some were dispossessed of their personal belongings including mobile phones and money before being forcefully and unlawfully returned to Bosnia.

Furthermore, the UN has recently documented other alarming systematic abuses against asylum seekers by the Croatian Police, which included shootings, robbery, beatings and even stripping migrants and refugees of their clothes before turning them back. This reflects serious failure to comply with the most basic principles of the international law and EU law regarding the right to asylum and the unlawfulness of using violence and excessive force against civilians.

Therefore, Euro-Med Monitor calls on the Croatian government to immediately end all such unlawful, discriminatory and criminal practices against migrants and refugees and launch an independent investigation into such disturbing events to hold the perpetrators accountable. Euro-Med Monitor also calls on the EU to undertake all necessary disciplinary actions against Croatia and investigate the Croatian police’s flagrant violation of internal EU laws and principles. We finally call on Croatia to establish clear measures to identify asylum claims, process them in accordance with relevant regulations and refrain completely from returning asylum seekers back to Bosnia or other countries if they wish to seek asylum in Croatia.

Article 18 of the Charter of Fundamental Rights of the European Union stipulates that “The right to asylum shall be guaranteed with due respect for the rules of the Geneva Convention of 28 July 1951 and the Protocol of 31 January 1967 relating to the status of refugees and in accordance with the Treaty on European Union and the Treaty on the Functioning of the European Union”. While the 1951 Geneva Convention stresses in Article 3 the principle of non-discrimination “as to race, religion or country of origin.” It also prohibits in Articles 31, 32 and 33 the imposition of penalties against refugees and asylum seekers or their expulsion or refoulement on grounds of national security or public order.

Croatia has the EU’s longest external border with Serbia and Bosnia. Asylum seekers pursuing safe refuge in the EU zone usually cross the Balkan route through Bosnia or Serbia to Croatia. However, they are currently being met with excessive force and brutality by the Croatian police who consider their actions necessary to “protect the borders”. The police are armed with pistols, truncheons and night vision goggles. In the four months following September 2019, the UNHCR reported 100 cases to the Croatian authorities of asylum seekers who’ve been forcefully returned to Bosnia and Serbia by the Croatian police.