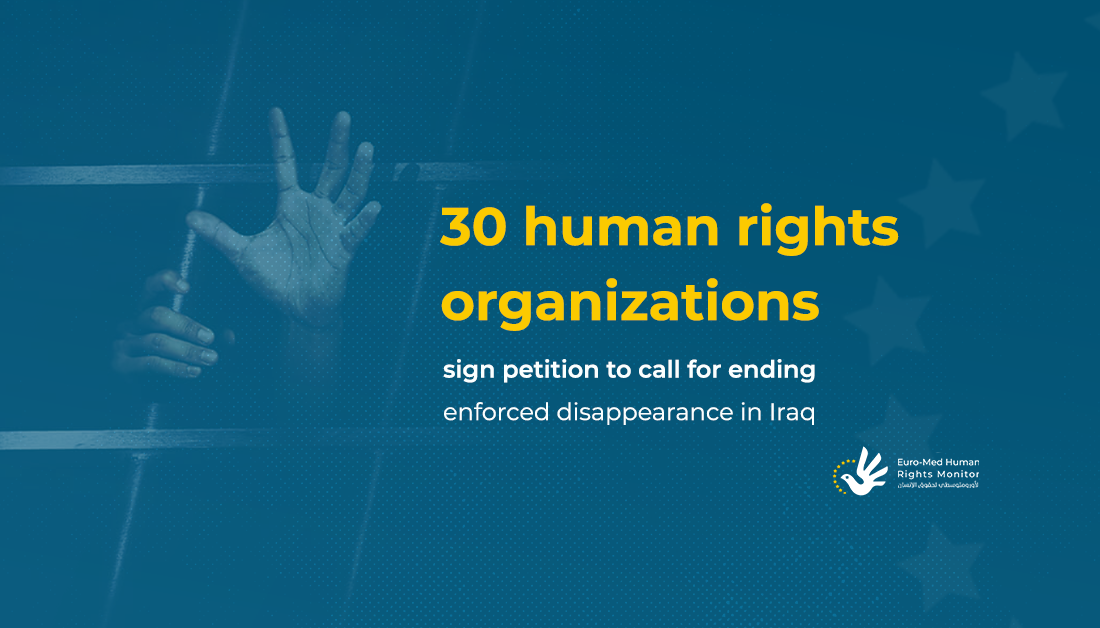 Geneva – In a petition published by the Euro-Mediterranean Human Rights Monitor thirty human rights organizations have called for ending enforced disappearance in Iraq and to take immediate measures to stop this crime prohibited under Iraqi and international laws.

The petition, which was signed by regional and international organizations, including the Euro-Med Federation against Enforced Disappearances, the Gulf Center for Human Rights, the American Center for Law and Justice, the Gulf-European Center for Human Rights and other organizations, highlighted record numbers of missing and enforcedly disappeared persons in Iraq after decades of conflict and human rights violations by various parties.

The petition states that following the 2014 ISIS takeover of large areas in Iraq, the enforced disappearance of thousands of civilians has increased, exceeding that of the sectarian fighting period that started in 2006. This does not include those who were forcibly disappeared by pro-government armed militias known as the Popular Mobilization Forces, as well as those who were held earlier by US forces without charges or trial who numbered about 23,000 people.

As of now, the fate of thousands of civilians, activists and peaceful opponents who were forcibly disappeared by Iraqi forces and armed militias is unknown. Reports suggest that some are held in secret detention centers throughout the country with no access to their families or lawyers, while others have been buried in mass graves, without the knowledge of their families. As a result, their families continue to suffer and face uncertainty over the fate of their loved ones, in light of international reports suggesting that many of these persons were executed and secretly buried.

Reports indicate that Iraq has become one of the largest countries that have missing persons in the world, and enforced disappearance has become part of a wide pattern in Iraq. The Iraqi authorities have repeatedly failed to respond to requests to disclose information about missing persons.

The alarming issue of forced disappearances in Iraq became more concerning in light of the ongoing Iraqi protests that broke out in October 2019. Protesters have faced government suppression, police brutality and arrests, and the fate of several Iraqis including journalists, activists and human rights defenders has become unknown.

In May, the new Iraqi Prime Minister, Mustafa al-Kadhimi, orderedthe Ministry of Interior to reveal the fate and whereabouts of thousands of forcibly disappeared persons during the war against ISIS.

Welcoming this step, the petition called on the Iraqi authorities to exert genuine efforts to put an end to the widespread violations against the forcibly disappeared people and their families by revealing their fate and ensuring the safety of those who are still alive and immediately release them.

The Iraqi authorities should respond to calls to disclose information about missing persons and immediately release detainees held without charges in secret prisons, the petition demanded.

Armed militias in Iraq operating outside the framework of the Iraqi legal and state structures should be dismantled. At the same time, people currently in secret detention should have a fair trial and access to family visits and lawyers.

The petition concluded that the international community should pressure the Iraqi government to shed light on the fate of forcibly disappeared persons.