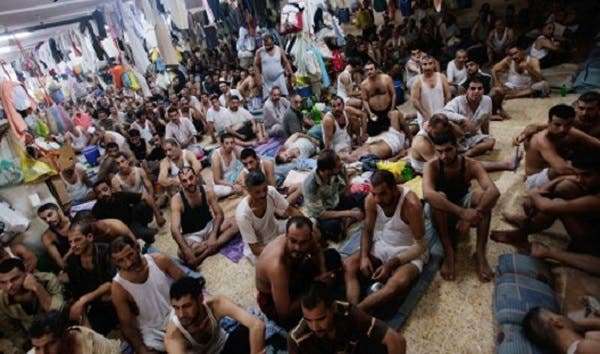 Geneva – Testimony documenting inhumane conditions in Iraqi prisons have been collected by the Euro-Mediterranean Human Rights Monitor, which warns of an imminent humanitarian catastrophe.

The outbreak of the novel coronavirus is a particular threat to the thousands of detainees, since the prisons are overcrowded, unsanitary and lack even minimum health care.

More than 60,000 people, including about 1,000 women, are detained in 13 government prisons. In addition, there are dozens of secret prisons run by militias, political parties, and various tribal and other factions.

Iraqi authorities refuse to disclose the number of detainees, their health condition or recorded deaths, although multiple testimonies report poor health overall, rapid disease spread and medical neglect. A basic lack of hygiene makes the prisons a fertile environment for the spread of diseases such as asthma, tuberculosis and hepatitis. Inadequate ventilation exacerbates the crisis, along with an absence of sanitizers.

At the same time, Iraqi prisons are increasingly overcrowded due to the escalation of detention and judicial delays.

Testimonies collected by Euro-Med indicate that these and other government practices are systematic and deliberate, not merely individual or random.

For example, A.A. is an Iraqi policeman who told Euro-Med about a secret prison in the Tahrawa area in the Nineveh Governorate that is run by a unit known as Brigade 30. It houses about 1,000 detainees arrested on malicious, sectarian charges. Leaders of Brigade 30 force families of the detainees to pay large sums of money in exchange for the release of their relatives.

K.TH.F., another Iraqi policeman, told us that Brigade 30 has other secret prisons in Nineveh. These prisons are mainly repurposed houses, in the Al-Qaraj area of the Kokjali neighborhood, where civilians from Mosul are kept in the basements. Their families are blackmailed for money.

On June 2, Jassem al-Samarrai, a resident of the Mukeshefah area of Samarra, reported that 50 civilians had been arrested by the Saraya Al-Salam militia, run by movement leader Muqtada al-Sadr. The arrests continued for three days, without any interference from government security services. Homes were raided, with militia members blasting doors open with bombs and live bullets—terrorizing children in the process.

“Authorities should allow detainees to hire lawyers, including during interrogation,” says Tariq Al-Liwa, Tariq Al-Liwa. “Authorities also should transfer detainees to facilities where government inspectors, independent observers and lawyers have unimpeded access to them. Detainees should be released if there is no clear legal basis for their detention, or if the government is unable to address the inhumane and degrading conditions in which they are held.”

Al-Liwa adds that Iraqi authorities must control the actions of their forces to ensure the legality of their practices, as well as prevent illegal armed militias from kidnapping and hiding people in secret prisons.

Finally, he concludes that the ministries of justice and the interior should expedite investigations, assure that everyone in pretrial detention has a speedy and fair trial or is released, improve detainees’ living conditions and provide them with all necessary health care.

Over 60,000 people are detained by Iraqi authorities in prisons that do not meet the minimum requirements guaranteed by international conventions. These prisons are over-crowded and unhealthy. Last June, Euro-Med Monitor launched a petition signed by 30 human rights organizations, calling on the authorities to put an end to enforced disappearance and arbitrary detention.